Trump and McConnell, once adversaries, have realized they need one another 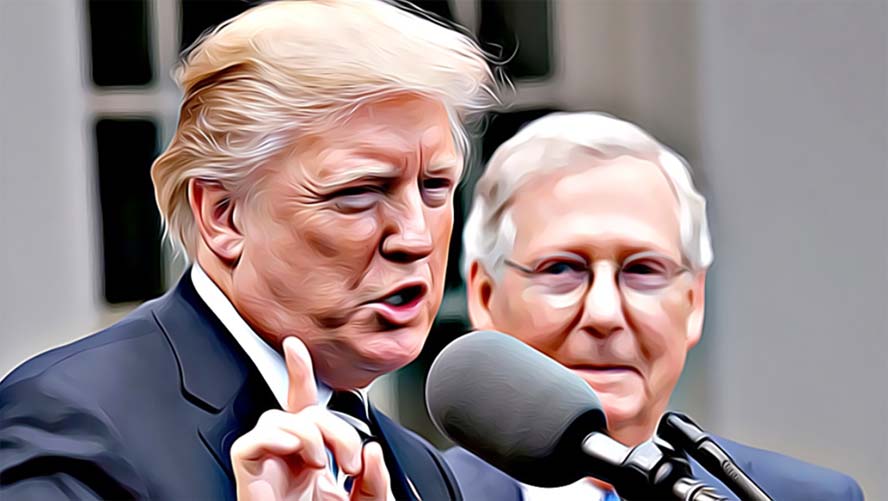 WASHINGTON - On a Friday evening last October, Mitch McConnell was at Nationals Park watching a playoff baseball game when he looked down at his iPhone and discovered a missed call. It was President Donald Trump.

Trump and McConnell hadn't made plans to talk, according to a person familiar with the call. But later that evening they spoke, two people familiar with the call said. It was the kind of impromptu conversation that would become a staple of the president's relationship with the Senate majority leader, which has improved considerably from a low point last summer.

"He calls me and I call him multiple times a week, and sometimes at unusual hours," McConnell, R-Ky., said in an interview with The Washington Post. "About half the time, it's just on his cell to my cell, without any intermediary."

Just nine months ago, Trump and McConnell were locked in a bitter feud in the wake of the GOP's failed effort to repeal and replace the Affordable Care Act. Now, they are plotting together to keep control of the Senate in the midterm elections, with each realizing the other is crucial to his success.

"We've talked a lot about the Senate situation, the races, what he can do to help," McConnell said. When it comes to energizing conservative voters this fall, McConnell said of Trump: "Only he can make that argument. He's got the biggest megaphone."

Their alliance is among the most fragile in American politics, built on recent victories, including the sweeping Republican tax law and a spate of successful Senate primaries. That winning streak needs to continue to preserve the detente, numerous allies said.

But the sprint toward the November elections is dotted with political land mines that could wreck their partnership and create havoc in the Republican Party. Messy Senate races in Arizona and Mississippi could divide them and imperil the majority, while looming showdowns over government funding and Trump's continued demands for a border wall threaten to spark new tensions.

"We haven't done what we are going to have to do in order to get immigration done or to get infrastructure done or to get the wall done," said Sen. David Perdue, R-Ga., one of Trump's closest allies in Congress. "So those are those are three friction points right now, as we speak, that's going to stress that relationship."

McConnell and Trump have almost no shared personality traits beyond a deeply rooted desire to win. The Kentuckian is soft-spoken and calculating; the president is garrulous and impulsive. McConnell has spent decades in elected office, while Trump is a political newcomer from the business world.

"The president is a surprise every minute," said Sen. Lamar Alexander, R-Tenn.), a McConnell confidant. "Mitch is a surprise about once every century."

They found common cause at the beginning of Trump's presidency, working together to confirm Neil Gorsuch to a Supreme Court seat that McConnell had left vacant for more than a year. But their next major undertaking ended in an embarrassing collapse, when Senate Republicans failed to unravel President Barack Obama's signature health-care law.

At the time, Trump made it clear he was "very disappointed" in McConnell, tweeting at him last August to "get back to work" on health care and a tax overhaul. McConnell mused that Trump had "excessive expectations" about the speed of government.

Their relationship was further strained by controversial Republican Roy Moore's defeat of their preferred candidate in a special-election primary for the Senate in Alabama.

"That was a low point for both of us," McConnell said in the interview. "No question about it."

Private meetings and conversations slowly helped patch things up, according to interviews with aides, allies and associates of both men. Some spoke on the condition of anonymity to talk candidly about the relationship.

One was a Sept. 5 huddle at the White House that lasted 10 to 15 minutes, according to one person briefed on the one-on-one meeting. Another person briefed on the talk said Trump and McConnell discussed the emerging tax plan and other matters on the horizon, without rehashing their summer spat.

On Oct. 16, Trump and McConnell had a lengthy lunch at the White House that went a long way toward boosting the Senate leader's confidence in his relationship with Trump. Afterward, they made a surprise trip to the Rose Garden for an impromptu 40-minute news conference.

Two months later, Republicans successfully passed the first tax overhaul in a generation, and McConnell presented the president with a Louisville slugger baseball bat to commemorate the win.

"Continuing to get the victories," said White House legislative affairs director Marc Short, is "what's essential to the relationship."

More recently, McConnell and Trump dodged disaster in West Virginia by joining forces to prevent Don Blankenship from winning the Republican nomination for Senate. The former coal baron spent a year in prison and may have risked an otherwise plum pickup opportunity in a year that Republicans are defending a narrow 51-to-49 majority.

They hatched a plan two days before the May 8 primary when Trump called McConnell with a simple question: What can I do to help?

"And so he said, 'Well what if I just make the case that Blankenship would lose in November?' " McConnell recalled. "And I said, that'd be great."

The episode illustrated how critical a functioning relationship between McConnell and Trump will be if the GOP wants to retain its fragile majority this year - and if Trump wants a Republican Senate that can help him rack up more wins in advance of his 2020 reelection bid.

But Trump's relationship with McConnell will face serious tests in Washington in coming months, including a September deadline to keep the government funded. Multiple senior Republican officials expect McConnell to shorten the annual August break at the behest of Trump, who has urged the Senate to stay in session to process more nominations and funding measures.

Trump has said there will be "no choice" but to shutter the government in September if he doesn't get money for the border wall he campaigned on. McConnell has vowed not to close the government.


In the midterms, Senate Republicans are fighting on mostly conservative terrain and are counting on Trump to motivate the party's voters to oust Democratic incumbents.

McConnell has identified nine states he thinks will decide control of the Senate. One is Arizona, an open race in which his preferred candidate, Rep. Martha McSally, faces a primary challenge from two candidates running to her right: former county sheriff Joe Arpaio and former state legislator Kelli Ward. Some Republicans have privately wondered whether Trump should intervene like he did in West Virginia.

"I don't know that that will be something he'll want to do," McConnell said. "I don't think any decision's been made about primary involvement, nor have I pressed him to."

Republicans face a similar situation in Mississippi, where recently appointed Sen. Cindy Hyde-Smith faces a challenge from hard-right state Sen. Chris McDaniel in a November special election. Trump has not gotten involved in that contest, either.

With the exception of Alabama, Trump's midterm Senate interventions have proven helpful. In addition to his last-minute push against Blankenship, Trump successfully shooed Danny Tarkanian out of his primary challenge against Sen. Dean Heller, R-Nev.

An effusive Heller lavished praise on Trump in the Senate Republican luncheon at the Capitol on Tuesday, as Trump made a winking reference to how he cleared the path forward for Heller by urging Tarkanian to step aside, according to two senators who attended the lunch. Heller responded in kind, telling Trump that was the best decision he had made as president, one of the senators recalled.

Now, McConnell is eager for Trump to go into full attack against vulnerable Democrats, as he did this month against Sen. Joe Donnelly of Indiana at a campaign rally.

Tuesday's lunch at the Capitol began with a warm introduction of the president by McConnell, who noted to the Republicans assembled inside the ornate Mansfield Room that one out of every eight judges serving on appellate courts had been picked by Trump.

"I think he had no way to really assess, based on past experience, just how much success he'd had," McConnell said in the interview. "We've not had a better period in the time that I've been here. And I think that telling him that helped."

Nonetheless, senior Republicans acknowledge the McConnell-Trump relationship could turn volatile as it faces major tests - and say there is little they can do if problems flare up again.

"We can hope and pray," Senate Majority Whip Jon Cornyn, R-Texas, said, "that it will stay strong."