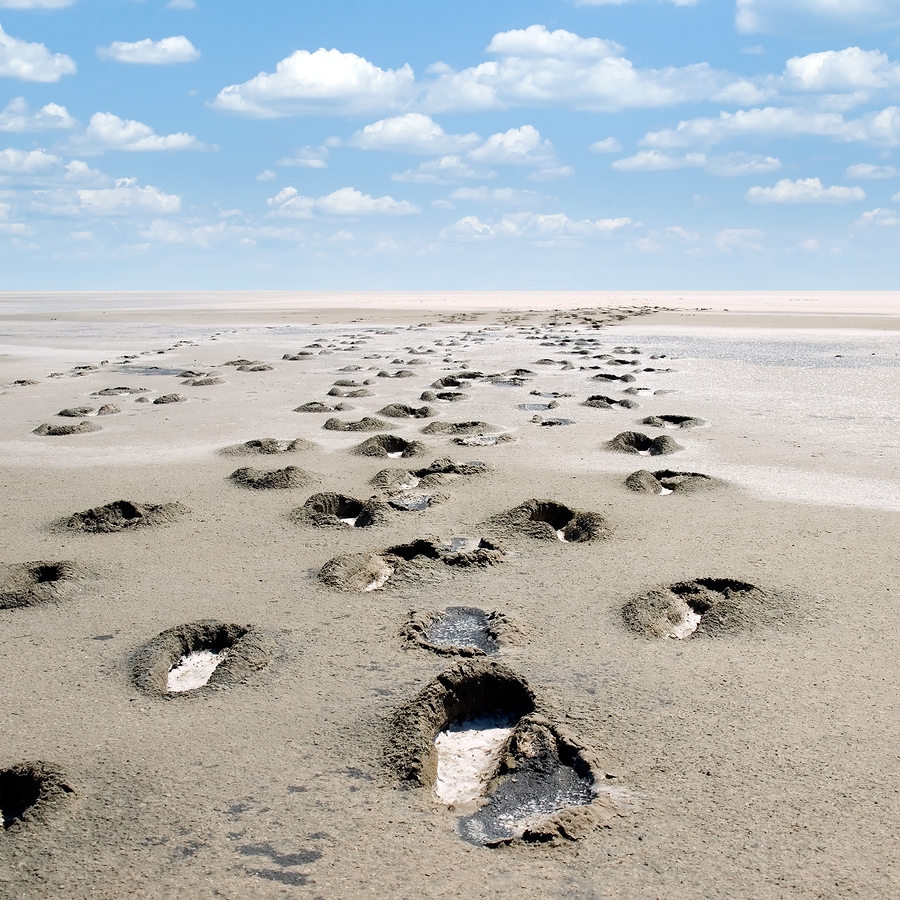 At Shavous, in which Jews recreate the Revelation at Sinai, a world-renowned philosopher offers a meditation on religion abuse

A desert is a lonely place, completely forsaken. There is neither food, nor water, nor any other form of sustaining substance. There is only the unbearable sun and its heat. There is no grass, and there are no trees. There are only deadly snakes and scorpions. In a desert, death stares you in the face. It is a dangerous place, unlivable and outrageous.

But the desert is also a magnificent place, filled with grandeur and full of life. It is a place where many things can happen which are not possible in any other location. First and foremost, it is a place of authenticity. Because it is a place where a sound, a Voice, can travel as in no other place. It has all the sound options that a musician can dream of. It can reach the deepest of its meanings and the highest of its dreams. In a desert a sound can travel to the end of the world. There are no obstacles standing in its way. In a desert a Voice can turn in any direction it desires and take on any dimension with no fear of corruption.

In a desert there are no walls by which the sound will be cut short. It is, above all, a place where a sound will not be disturbed or troubled by other sounds that may overwhelm it or even silence it.

Why? Because a desert is a place of devastating silence. There are no distractions; there is no clash of voices. No "voice competition".

If there is ever to be an authentic Voice to be heard, it is here in the desert. It can't be undermined and falsified, using it for selfish purposes. It is because of the desert's thundering silence that it is possible to hear a "still voice" with no obstruction. It cannot bear mediocrity, even when it is original and thought of as novel. Instead, it seeks singular excellence even when most men cannot recognize it as such. It protests against those who are appeased when they can find something old in the new, whereas it is clear that this old could not have given birth to this new.

The Egyptian French poet, Edward Jabes, noted the relationship between the Hebrew words "dabar", word, and "midbar", desert. This, he claims, goes to the core of what a Jew is all about:

"With exemplary regularity the Jew chooses to set out for the desert, to go toward a renewed word that has become his origin‚Ä¶ A wandering word is the word of God. It has for its echo the word of wandering people. No oasis for it, no shadow, no peace. Only the immense, thirsty desert, only the book of his thirst‚Ä¶." (From The Book to the Book, Wesleyan University Press, 1991, pp 166-7)

Here, in the emptiness and silence of the desert, the authentic Word can be heard. A Word stripped of all distractions. Naked, without any excuse. But it can only be heard by a people of the wilderness; a people who are not rooted in a substance of physical limitations and borders; a people who are not entirely fixed by an earthly point, even while living in a homeland.

Their spirit reaches far beyond the borders of any restricted place. They are particularistic so as to be universalistic. They are never satisfied with their spiritual conditions and are therefore always on the road, looking for more.

A wandering people carried by a wandering Word which can never permanently land because the runway is too narrow and they cannot fit into any end destination. A people who always experience unrest because they carry the Word which doesn't fit anywhere and wanders in the existential condition of an unlimited desert. A Word which unnerves because it is rooted in the desert where, if not properly handled, it becomes deadly.

It needs a people who received the Word before having received their land. More than that, a people to whom the Word itself gave birth. The Word is the mother of the people. A people who can make their land into a portable homeland, carrying it to any corner of the earth because their land is a Word. It is the land which depends on the Word and not the Word which depends on the land. Here the Word is the author of the people; the people are not the author of the Word. The homeland is the "Text"- the Word. (George Steiner) They dwell in the Word and become real, because the Word is the father of its readers and not vice versa.

A desert is even more. It is a place where nothing can be achieved. In a desert man cannot prove himself, at least not in the conventional sense of the word. It doesn't offer jobs that people can fight over and compete for. It has no factories, offices or department stores. There are no bosses to order us around and no fellow workers with whom we are in competition. It is "prestige deprived". In a desert there is no "kavod/honor" to be obtained. It doesn't have cities, homes, fences. Once it has these, it is no longer a desert. Human achievements will end its desert status and will undermine and destroy the grandeur of its might and beauty.

Man can only "be" but never "have" anything in a desert. There is no food to be eaten but the manna, the soul food, and one can easily walk in the same shoes for 40 years because authenticity does not wear out. Men's garments grow with them and do not need changing or cleaning because they are as pure as can be. And that which is pure continues to grow and stays clean.

The desert is therefore a state of mind. It removes the walls in our subconscious, and even in our conscious way of thinking. It is an "out of the box" realm. In a desert one can think unlimitedly. As such, one is open to the "impossible" and hears murmurs of another world which one can never hear in the city or on a job. The desert allows for authentic thinking, without obstacles, and therefore it is able to break through and remove from us any artificial thoughts which do not identify with our deeper souls. Nothing spiritual gets lost in us, because the fences of our thoughts become neutralized and no longer bar the way to our inner life. It is ultimate liberty. It teaches us that openness does not mean surrender to what is most "in", or powerful. Nor does it consist of vulgar successes made into a principle.

This is the reason why the Torah could only have been given in a desert - Midbar. Why did the Divine not give the Torah in a civilized place? Had He given it on Wall Street, He would have had to decide who would sit on the Board of Investors. He would have had to deal with the "politics of friendships" and personal agendas of how much interest to give and where to invest.

The Divine didn't want shareholders or agendas to pollute His words and make them "user friendly" in ways which would compromise His very Word. So He chose the desert. A place without any personal motives. The ideal place to fall in love because there is no competition. And because love is the irresistible desire to be desired irresistibly (Louis Ginsberg), only a Midbar can become the home of lovers - the Giver of the Word and the receivers of the Voice to be married under the canopy of authenticity.

"Anyone who does not make himself open to all ("hefker", ownerless), like a wilderness, cannot gain wisdom and Torah" (Bamidbar Rabbah, 1:7) say the Sages.

With this statement the Sages introduce a most important insight concerning the Almighty, the nature of Torah and the desert. They cannot bear artificial, unauthentic ideas which are sold in the superficiality of this world.

In a Midbar one can hear an authentic Voice and immediately distinguish it from the artificial word, because the authentic Voice will protest without delay. It has no place to hide, so it will run up against a wall and instead of being silenced will become nearly violent and unrelenting. The wall will start to shake and will ultimately collapse because it is not really rooted in a desert.

The "authentic" is perhaps not to be found when deliberately pursued, but there is no missing it when it is present. As such, it will become a "commanding voice" which can make us nervous since it becomes disturbing and unbearable. It becomes a deadly, poisonous snake for those who have not shaped themselves as desert people.

A desert is still more. It is also a place where the word cannot be caught and locked up. In can't be framed and manipulated. Yes, to activate the world and make an imprint on it, it has to come down and respond to the "here and now". It must allow for fences and limitations whenever needed. Limitations can be great emancipators. But it must always carry the "tomorrow and over there".

To have any effect, it must borrow from the world of man and his language. But it needs to have an escape. It must be like a fishnet which captures its mundane needs, but with holes so that the ongoing flow of water will not get caught up in the net itself. It must be a thoroughfare for all genuine thoughts, always looking for a new destination.

The only quality which can save us from the snakes in this desert is the awe of Heaven. Only this quality can save us from falling into the hands of the serpent. But it can be done and therefore it must be done so as to reveal the Word given in the desert and to allow it all the space it deserves.

Abraham found the Divine in the desert and so the people of Israel received the Torah in a place of ultimate authenticity: The Desert of devastating conditions and great opportunities. It is a dangerous place, but a desert it must be.

Whoever thinks that the Divine Word is commonplace and easily lived by, has never been in the Ultimate desert of his life.

JWR contributor Rabbi Nathan Lopes Cardozo is a world-renowned lecturer and ambassador for Judaism, the Jewish people, the State of Israel and Sephardic Heritage.