In blow against pro-abortion activists, Supreme Court refuses to take up challenge to restrictive abortion law 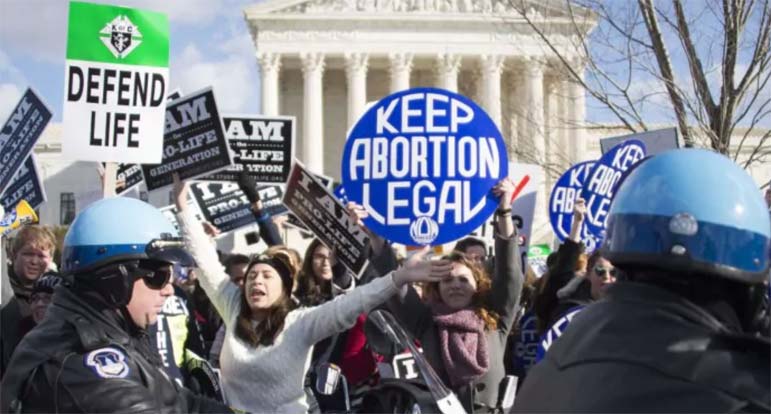 WASHINGTON - The Supreme Court on Tuesday turned down a challenge to a restrictive Arkansas law that for now will end the use of medication abortions in the state and could close two of the state's three abortion clinics.

The law requires doctors who provide medication abortions to have a contract with a second doctor who has hospital admitting privileges. Arkansas contends there can be complications with the procedure, while abortion rights advocates say the law's objective is to make it more difficult for women to access the two-pill regimen that is used in the first nine weeks of pregnancy.

While Planned Parenthood said it would immediately notify patients that it can no longer offer the procedure in the state, the case is expected to return to a lower court, perhaps for a trial on the law's benefits and burdens.

"Arkansas is now shamefully responsible for being the first state to ban medication abortion," Dawn Laguens, executive vice president of Planned Parenthood Federation of America said in a statement.

"This dangerous law also immediately ends access to safe, legal abortion at all but one health center in the state," Laguens said. "If that's not an undue burden, what is? This law cannot and must not stand. We will not stop fighting for every person's right to access safe, legal abortion."

A medication abortion involves a woman taking mifepristone, which makes it difficult for a fetus to attach in the uterus, and misoprostol, which causes expulsion, similar to a miscarriage. In 2014, medication abortions accounted for 45 percent of abortions nationally in the first nine weeks, abortion providers said in a brief to the court. Arkansas said 14 percent of the state's abortion patients used the procedure.

The state has three abortion clinics, and two of those offer only medication abortions. So the law could leave one clinic, in Little Rock, to serve the entire state - and it would offer only surgical abortions.

Planned Parenthood said it would ask a lower court to again halt the law until a judge can hold a trial to show how many women could be affected by it. If a clinic in Fayetteville, which offers only medication abortion, is closed, the organization said, women in that area would be forced to make a 380-mile round trip to Little Rock to obtain an abortion. And they could be forced to make the trip twice because of a separate 48-hour waiting period.

Arkansas contends the law is needed because there are more complications with medication abortions than surgical ones. It said the organization has not made good-faith efforts to find doctors willing to fulfill the law's requirement, and that it had not shown that a large portion of women seeking abortions would be affected.

"As attorney general, I have fully defended this law at every turn and applaud the Supreme Court's decision against Planned Parenthood today," said Attorney General Leslie Rutledge. "Protecting the health and well-being of women and the unborn will always be a priority. We are a pro-life state and always will be as long as I am attorney general."

The Supreme Court did not say why it declined to accept the challenge, as is customary. But the failure of any of the court's liberal justices supportive of abortion rights to speak out might indicate they believed there is more work for lower courts to do before it is ready for the high court.

U.S. District Judge Kristine G. Baker had temporarily blocked the law, concluding that any medical benefit from the contract requirement would be "incrementally small" while the burden on women's access to abortion would be substantial. The law was "a solution in search of a problem," the judge said.

But a panel of the U.S. Court of Appeals for the 8th Circuit said that the lower court had not delved deeply enough before putting on hold the statute passed by the Arkansas legislature.

That court said Baker had "failed to make factual findings estimating the number of women burdened by the statute" - those who would either forgo or postpone an abortion because of the law.

Two years ago, the Supreme Court voted 5 to 3 to overturn a similar Texas law that required doctors who provided abortions to have admitting privileges in a local hospital.

The Texas law "provides few, if any, health benefits for women, poses a substantial obstacle to women seeking abortions, and constitutes an 'undue burden' on their constitutional right to do so," Justice Stephen G. Breyer wrote for the majority.

The admitting-privileges requirement in Texas cut the number of abortion providers by half.

Planned Parenthood said in its petition to the Supreme Court that was an approach the majority had rejected in the Texas decision, and that the burden in Arkansas would be extreme.

"The restriction would eliminate entirely a safe, common method of early abortion and force all women in the state to travel (twice) to a single provider in Little Rock to have a surgical procedure - thereby preventing many women from obtaining an abortion altogether and delaying many others," the petition said. "Worse yet, it would do so even where a medication abortion is medically indicated or strongly preferred."

If the Arkansas law stands, it would become the seventh state to have only one abortion clinic.