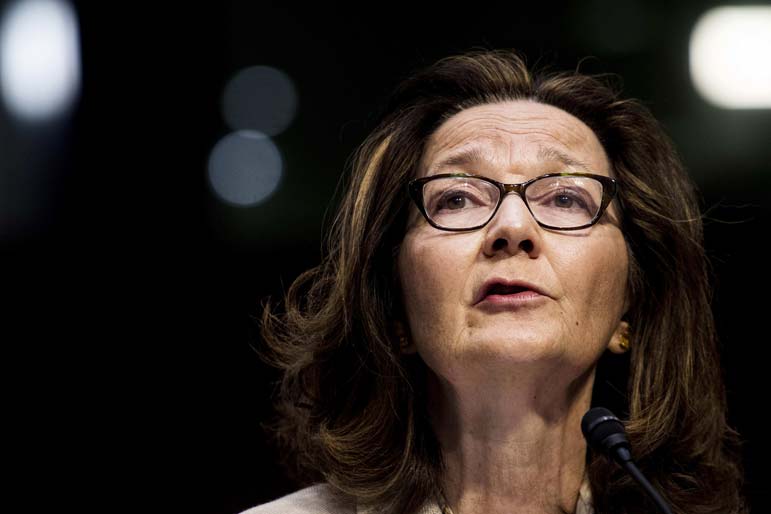 Is the United States about to install a CIA director who supported torturing suspected terrorists in the wake of 9/11? And would she do it again if President Donald Trump demanded it?

Those are the central questions that Gina Haspel faced Wednesday in a sometimes-confrontational Senate hearing, the first step to getting confirmed to lead the CIA. Trump nominated her after he tapped her boss, Mike Pompeo, to be secretary of state.

But as with many of Trump's nominations, Haspel's carries significant controversy so much so that days earlier she sought to withdraw from consideration.

Sure enough, the declassified version of Wednesday's hearing focused almost exclusively on Haspel's role in two major blights on the CIA's recent past:

She headed a secret CIA detention facility in Thailand in 2002 where an al-Qaida suspect was waterboarded.

At the behest of her boss, she drafted a 2005 cable ordering the CIA to destroy more than 90 videotapes of its interrogation of that suspect.

Haspel's critics, including some Republicans, are concerned about the message that putting her in charge would send to the rest of the world.

Here are four takeaways from the hearing and what it could mean for Haspel's still-iffy chances to get approved by the full Senate.

Haspel's resume is hard to argue with. More than three decades of work, most of it as an undercover agent, for the CIA. Support from top intelligence officials in both Republican and Democratic administrations. Nominating herself for difficult, lonely and sometimes dangerous jobs across the world, especially after 9/11.

(Fascinating side note to that last point. "I excelled at" getting secrets, Haspel said minutes after describing herself as an average middle-class American. She went on to say one of her favorite parts of the job was "brush passes, dead drops, or ... meetings in dusty back allies of Third World capitals" on "dark, moonless nights.")

Basically, Haspel is someone senators genuinely respect, a career spy who has steadily climbed the ranks while maintaining a congenial relationship with Congress. "I like you personally very much," said one of her fiercest critics in this hearing. Sen. Dianne Feinstein, D-Calif.

• But Republicans and Democrats fundamentally disagree about what her role in torture years ago means today.

Especially since the CIA declassified a report ahead of the hearing that cleared her of any wrongdoing in destroying evidence of interrogation tapes.

But Democrats and some skeptical Republican argue the past can repeat itself. And they didn't seem entirely convinced Haspel would do things differently.

Haspel said she wouldn't approve waterboarding, nor would she destroy those tapes if they were before her today. But she didn't do much else to help her case. Rather than say torture is wrong, for example, Haspel repeatedly cited U.S. law that bans it to explain why she wouldn't restart it.

Her technical explanations rang hollow to some in a time when torture is now nearly universally condemned in Washington.

"I know you believed it was legal," said Sen. Martin Heinrich, D-N.M. " ... I want to trust that you have the moral compass you said you have. You're giving very legalistic answers to very moral questions."

• Senators want to know if she can stand up to Trump.

Haspel's effort to convince her critics she won't authorize torture was made infinitely more difficult by her boss, the president. Trump has said "torture works."

Haspel said she doesn't think torture played a "knowable" role in getting valuable information from the enemy. But what would she do if Trump asked her to waterboard someone anyway, senators wanted to know. "If you're in the room, will the president listen to you if you tell him that something is a bad idea?" asked Sen. Mark Warner, D-Va.

Haspel didn't talk about ultimatums or engage in hypotheticals about storming out of the Oval Office or offering her resignation. But she was unequivocal that she'd do everything she could to avoid torture.

"We're not getting back in that business," she said.

"I think we should hold ourselves to a stricter moral standard, and I would never allow the CIA to be involved in coercive interrogation," she said at another time.

Haspel would be the first woman to lead the CIA, a fact her (all male) supporters took the time to emphasize. It's "an achievement that is long overdue considering the incredible contribution that women have given to the CIA," said former senator Saxby Chambliss, R-Ga.

Haspel played up her gender, too.

"It is not my way to trumpet the fact I am a woman for the top job in the CIA, but I would be remiss in not remarking on it, not least because of the outpouring of support from young women in the CIA and across the [intelligence community], because they consider it a good sign for their own prospects," Haspel said in a moment that was remarkable for its candor.