In defense of a 'religious bigot' 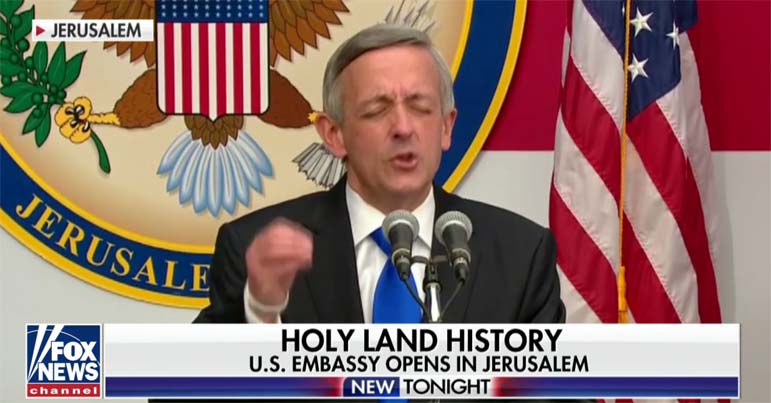 So you think I'm going to hell. So what?

Color me genuinely confused by the outcry against Texas televangelist Robert Jeffress, who spoke Monday at the opening of the American Embassy in Jerusalem. Jeffress has previously said that "you can't be saved being a Jew," that Mormonism is a "heresy" and that Islam is "wrong."

It seems strange to me, for example, that Mitt Romney, a devout Mormon, is tweeting that Jeffress is "a religious bigot."

Do those statements really make Jeffress, the pastor of First Baptist Church in Dallas, a bigot? All he is doing is echoing an almost 1,800-year-old doctrine: Extra ecclesiam nulla salus, there is no salvation outside the church. It can be traced to St. Cyprian of Carthage, who died in the year 258. The basic idea is that Jesus Christ came to save those who believe in him - and not those who don't.

This view doesn't reflect the latest in pluralism. The Catholic Church treated it as dogma for more than a millennium, but has backed away in recent decades. Pope Benedict XVI, when he was still the theologian Joseph Ratzinger, expressed skepticism about the view in a 1964 sermon. "We are no longer ready and able," he said, "to think that our neighbor, who is a decent and respectable man and in many ways better than we are, should be eternally damned simply because he is not a Catholic."

But plenty of Christians of many different denominations still believe this teaching in one way or another.

Even Mormons have their version. "Jesus Christ taught that baptism is essential to the salvation of all who have lived on earth (see John 3:5)," as the official website for the Church of Jesus Christ of Latter-day Saints puts it. That's one reason Mormons practice posthumous baptism of those who would otherwise be unsaved: so that good people who were not members of the LDS church can achieve salvation.

To be clear, I have no dog in the Christian theological fight about whether good people who aren't Christians can be saved - much less which version of Christianity is necessary to achieve salvation. That's because I'm not a Christian.

My point is rather that I can't, and shouldn't, feel offended by someone telling me that I won't be saved because I don't have the right religious beliefs.

Most religions in the monotheistic tradition think they are right and others are wrong. That's normal. It isn't a reason to consider those who hold other beliefs to be bigots.

What's more, someone who believes I am going to hell because I am not a Christian or the right kind of Christian doesn't think I am necessarily morally bad. To the contrary, the believer thinks I will go to hell even if I am wholly righteous - because salvation requires specific faith in Christ.

It might also be upsetting if the believer were saying something like, "the hell with you." But the believer isn't dismissing me. He's trying to convince me to adopt his truth.

Think of it this way: If you believe I'm going to hell, there are two logical possibilities. Either you're right or you're wrong.

If you're right, then you are doing me an enormous service by instructing me in the error of my ways. I could adopt the true faith and be saved.

If you're wrong, then there's no harm done. I'm not going to hell. Your belief that I am makes not one bit of difference to my salvation, or lack of same.

Of course, religious coercion, oppression or brainwashing in the name of forcing me to be saved would be terribly wrong. Religious liberty is a basic human right. But there is no necessary connection between believing that I will be saved and trying to force me to adopt your beliefs. Indeed, one of the best arguments in favor of religious toleration, deployed most famously by the philosopher John Locke, is that G od (specifically, Locke's Christian G od) would not accept a faith that was not freely chosen. Religious coercion was therefore pointless, because it wouldn't achieve salvation for the people being coerced.

So far as I know, Jeffress hasn't advocated religious coercion. He just believes that the only way to be saved is through Jesus.

This brings me to the somewhat different question of whether it is bigoted to believe, as Jeffress does, that "gay is not OK." In his posted lecture on the topic, Jeffress says that it would be wrong for Christians to use "derogatory language or crude terminology to describe homosexuality."

He takes the scriptural view that "Jesus did condemn homosexuality." But he says that gay-rights advocates are correct to point out the hypocrisy of evangelicals who focus exclusively on the sin of homosexuality while neglecting other sins. "Christians need to be consistent," Jeffress says, "by not just zeroing in on homosexuality but also speaking out about every kind of sexual immorality." Finally, Jeffress says that homosexuality is a sin that can be forgiven like all others - through Christ's sacrifice.

That's not bigotry. It's theology. And it makes no sense to be offended by it.