When the people's power isn't enough 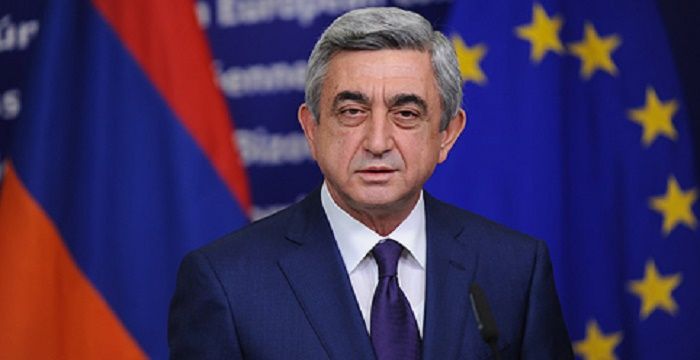 Serzh Sargsyan, above, was president of Armenia for a decade.

"When I saw the masses of East German citizens there, I knew they were in the right." A quarter-century later, that was how Lt. Col. Harald Jager explained his decision to open the gates and let his fellow citizens through the Berlin Wall.

Jager was guarding a border checkpoint on Nov. 9, 1989, in the hours after East German leaders had announced that the travel rules were changing. As Berliners flocked to the wall, demanding to cross into the West, he asked repeatedly for clarification from his superiors, but nothing was forthcoming.

In the end, the crowds persuadedhim to act: "At the moment it became so clear to me . . . the stupidity, the lack of humanity. I finally said to myself: 'Kiss my arse. Now I will do what I think is right.' " That moment is one of the clearest illustrations of how and why street demonstrations can sometimes create political change. They can appeal to a deeper morality and thus persuade people in power to change course, to abandon a repressive regime, to stop using force.

I thought of Jager when the prime minister of Armenia surprised his country and resigned. Serzh Sargsyan was president of Armenia for a decade, from 2008 to 2018, in that time building up a web of business and political contacts designed to keep him in power.

In anticipation of leaving office, he changed some of the rules, enhanced the power of the prime minister - and arranged for the parliament to elect him to that job. This is a familiar trick: Both Russian President Vladimir Putin and Turkish President Recep Tayyip Erdogan have played similar games, shifting between the presidency and the prime ministership to flout their constitutions and stay in charge.

Armenians saw through it. For 11 days, large crowds of them protested this duplicitous power grab, in the capital and elsewhere. Then, unexpectedly, Sargsyan resigned. "I was wrong," he declared. "The street movement is against my tenure. I am fulfilling your demand."

Surprised Armenians flooded the streets again to celebrate. Thomas de Waal, the author of several books on Armenia, told me he reckoned Sargsyan was swayed by the fact that Armenia is a "small country with a high feeling of national solidarity." Another possible factor: The last time Armenians organized mass protests, in March 2008, a police crackdown left 10 people dead. Perhaps Sargsyan "didn't want to repeat that experience."

Whatever the true reason, political demonstrations worked in Armenia for the same reason they worked in Berlin in 1989, and in Kiev, Ukraine, in 2014: because they moved a key person to question the legitimacy of the regime, even his own regime. And this, unfortunately, is unusual.

But most often they fail because there is no JĂ¤ger, there is no Sargsyan, and the regime refuses to listen. The ruler successfully smears the protesters as unrepresentative, unpatriotic - or in the pay of foreigners. Instead of being moved by their sincerity and their numbers, Putin described protesters in 2012 as evidence of an American plot - which is exactly what the Chinese claimed about the Hong Kong protesters in 2014. Nor is this just a tactic used by authoritarians: American "conservatives" also claimed that students protesting gun laws last month were being paid to do so.

When they don't or can't move people, demonstrations, marches and "occupy" movements are insufficient. It's not enough just to be there: The movement has to join or become a political party, the street leaders have to become politicians.

In democracies, they need to win elections. In dictatorships, they need other means to peel away support for the ruling party. In political vacuums, such as the one right now in Armenia, they need a strategy. To convert the desire for change into a more just society is a long project, one which requires people to work for many years, not just to show up for a few hours.

Demonstrations matter even when they don't succeed: They cheer people up, spread solidarity, keep people inspired. Every once in a while, they achieve something dramatic. But most of the time, by themselves, it's important to remember that unless they can institutionalize the demands of the crowd - find ways to make them permanent - they aren't enough.