Full Throttle on the Hamster Wheel 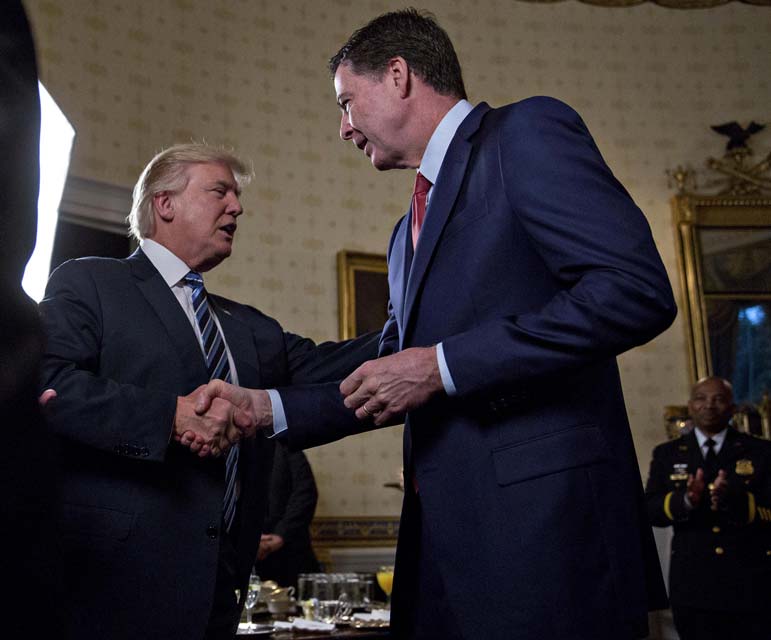 As the years roll by, I grow less and less interested in the infernal din of the present - the stuff that won't be important in six weeks' time, never mind six years'. But in today's political coverage the hamster wheel seems to be accelerating. The two big stories of the moment (I use the term literally) are that Trump disclosed classified information to the Russians and that way back in February he leaned on then FBI honcho James Comey to end the investigation into then National Security honcho Michael Flynn.

Is it an unusually long memo? If not, why not read all of it? Or, indeed, show the thing to the reporter. The actual quote, as with so much of Trump's rhetoric, is capable of different interpretations:

"I hope you can see your way clear to letting this go, to letting Flynn go," Mr. Trump told Mr. Comey, according to the memo. "He is a good guy."

But that's if you believe Comey's recollection is accurate. In his final pratfall before Congress, Comey said under oath that Hillary's lady-in-waiting Huma Abedin had forwarded 100,000 emails to her husband Anthony Weiner. That is not true. Or, if you prefer, it's false. And it's hardly a peripheral matter, either, but one central to the subject of his testimony that day. Yet he completely bungled it.

Nevertheless, if this partially read memo is as the Times characterized it ("Comey Memo Says Trump Asked Him to End Flynn Investigation"), that would be a very serious matter. Comey had several options:

1) He could have reported Trump's attempted interference to the Department of Justice (as he was obliged to do);

2) He could have disclosed it to the Senate Intelligence Committee chairman Richard Burr;

3) He could have resigned on principle.

Instead, he did nothing - because, according to "Mr Comey's associate", "they [Comey and his 'associates'] decided that they would try to keep the conversation secret ...so the details of the conversation would not affect the investigation." Presumably "Mr Comey's associate" is no longer worried it will "affect the investigation", so three months later he's leaking it.

A leaker is not a disinterested provider of information, but a character in the drama, with his own motivations. For example, the most famous leaker in FBI history - "Deep Throat" of Watergate - turned out to be not a high-minded whistle-blower but "a disaffected sidekick of J Edgar Hoover, an old-school G-man embittered at being passed over for the director's job when the big guy keeled over after half-a-century in harness. And, whatever Mr Felt's motives, it wasn't because of a distaste for illegal break-ins: at the FBI, he himself had authorised illegal burglaries at the homes of friends and family of various leftists." A leaker is not a "source" - a passive repository of information - but a player in the drama seeking to manipulate the narrative to his own advantage.

Which brings us to this business of Trump's meeting with the Russian Foreign Minister. As this Vice Tweeter agonizes:

An allied informant is likely being tortured to death as we speak, thanks ONLY to Trump's big mouth.

Trump's big mouth is as nothing to this Vice guy's big moustache, which is so impressive one wonders if he dug up Jerry Colonna's cadaver and stole it. But I digress. Insofar as anybody's being tortured because of actionable information promiscuously disclosed, it's not because of Trump's big mouth, but because of the leaker's big mouth and The Washington Post's even bigger one.

As it happens, I've been in the Oval Office and I would observe that, in contrast to meeting, say, the Canadian or Australian prime minister, you're never really alone with a president. There are always, on the perimeter of your vision, aides hither and yon, slipping in and out of the room, not saying anything, just hovering, always hovering. As if in dread, as with the loopier Ottoman sultans, of what might happen were the President to be left un-hovered. Nevertheless, a meeting between the US President and the Russian Foreign Minister must surely be one of the tightest groups to meet in the Oval Office.

When you step back and look at the ever more frenzied hamster wheel, what's really going on? Trump was elected on a pledge to "drain the swamp", and the swamp is finding, in Chuck Schumer's memorable formulation, "six ways from Sunday at getting back at you" - in order to ensure that the swamp remains undrained, that nothing changes, that Big Government gets bigger, and twenty trillion in debt rises to thirty, and the armies of the undocumented continue to pour across the border...

Step a little further back from the hamster wheel, and you vaguely recall that Trump's voters voted for change, for something other than economic decline and cultural transformation. Andrew Sullivan, of all people, spoke about them sympathetically on KQED the other day:

Economic pressure can be the backdrop to real cultural anxiety and make it much worse. And I think the trouble is that people have not fully grappled with the enormous changes that happened in this country over the last 50 years. This is going to be the first white-majority country to become the first white-minority country in the history of the world. The kind of mass immigration we've had - a lot of it done illegally - over the last 30 years, has been extraordinary. We're now at the highest point of foreign-born population in the United States that we've ever been in and I'm one of them. I'm an immigrant. I came here in 1984, but I still count as an immigrant. I'm a citizen of the United States. But, of course, that has changed dramatically the racial composition of this country. We're not allowed to talk about this. But this is what people clearly are responding to. You can call it racism in a way. But you can also say that it's simply an instinct, that they don't want their entire society to be radically changed overnight or over a couple decades.

More to the point, it's not natural change - but the conscious result of political policy, of government intervention with social composition that was never explicitly put before the people and which the Permanent State insists can never be changed. Incidentally, re Trump cozying up to the Russians, it's interesting to see him being accused of treason by people who believe in open borders, and the erasure of any distinction between citizens and non-citizens, and therefore of any claim of national allegiance, upon which the entire concept of treason depends. Sir John Harington, the 16th century inventor (of a prototype flush toilet, among other delights), observed:

Treason doth never prosper: what's the reason?
Why, if it prosper, none dare call it treason.


That's to say, if a treasonous conceit gains sufficient widespread currency as to become conventional wisdom, it can't as a practical matter be treason anymore, can it? The hollowing out of American citizenship - via "sanctuary cities", drivers' licenses for illegal aliens, etc - has been so total that to object to it is now unacceptable: "We're not allowed to talk about this," as Sullivan says. As Jorge Ramos lectured Tucker Carlson on Fox the other night, Carlson has no standing to object to illegal immigrants because they turn down the bed in his hotel room. When they're serving you your Egg McMuffin, none dare call it treason.

As for Sullivan's statement that "this is going to be the first white-majority country to become the first white-minority country in the history of the world", the chaps back on the hamster wheel in 1965 - like Ted Kennedy - explicitly assured Americans that that was not going to happen, no need to worry about it. Half-a-century on, it may be the first country, but certainly not the last. My old boss, Charles Moore, on Douglas Murray's new book, The Strange Death of Europe:

One telling point he makes is how even the most 'bigoted' predictions of demographic change have been exceeded by reality. Suppose, says Murray, that Enoch Powell, in his incendiary 'Rivers of Blood' speech in 1968, had predicted that, in the 2011 census, in 23 of London's 33 boroughs, people describing themselves as 'white British' would have been in a minority. He would have been pilloried for his alarmism. Yet it is so. At a meeting of Google Zeitgeist (perfect venue) on Monday, Tony Blair said that immigration was a 'perception problem'. Murray's point is that it is a plainly numerical one.

Some stories are so big they never make the papers. You can't see the tsunami for the leaks.