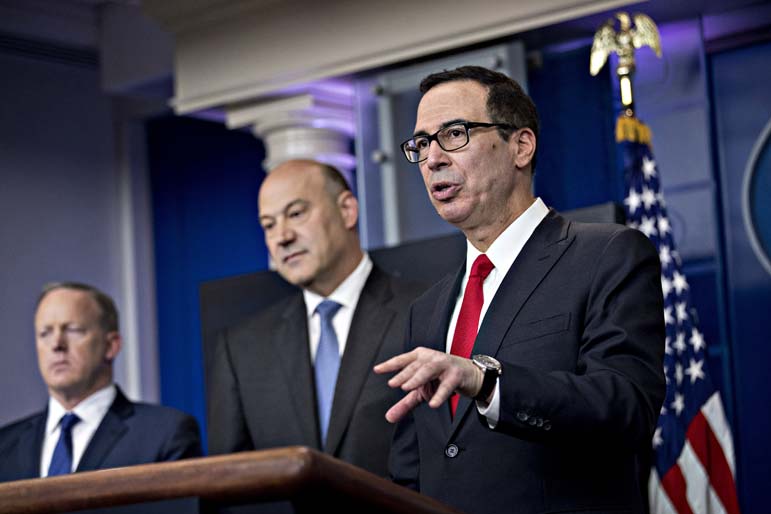 Democrats have been saying for years that we need tax increases, and that paying taxes is one of the greatest forms of patriotism. Now it looks like President Trump is going to put their beliefs to the test.

Right now, if you pay state property or income taxes, you can deduct them against your federal income taxes. In effect, it means that if you're in a high federal bracket, your state taxes may be offset by that federal deduction to the tune of 40% or more.

End the federal deduction, though, and high state taxes come straight out of taxpayers' pockets with no offset. As economist Nicole Kaeding told The Hill, by allowing deductions for state taxes, "the federal government is essentially subsidizing high tax rates in states like California and New York."

The National Journal's Ronald Brownstein calls this "an offensive against blue states," but as Brad Todd replied on Twitter, "I think what you mean is it ends imbalanced federal subsidy for big government at the local level."

I think that's right. States should be able to set their own levels of taxing and spending, but I see no reason why a Walmart cashier in Tennessee (which has no state income tax and low property taxes) should be subsidizing a hedge fund mogul in New York or a studio executive in Hollywood.

It's fine if blue states want to have higher state and local tax rates, as they do, but they shouldn't be encouraged to do so by federal tax giveaways. And it's the urban, coastal areas that have done best over the past 25 years, so it seems time for them to pay their fair share now.

In that spirit, I have a few other proposals. First, we should eliminate the mortgage interest deduction. Experts have been calling for that for years, and they're right to. The deduction was part of an ill-considered federal effort to encourage home ownership by people who could only marginally afford it, but that has backfired with the bursting of the housing bubble.

But homeownership and college aren't causes of middle-class status; they're markers for possessing the kinds of traits - self-discipline, the ability to defer gratification, etc. - that let you enter, and stay, in the middle class. Subsidizing the markers doesn't produce the traits; if anything, it undermines them."

In addition, of course, the mortgage interest deduction encourages and perpetuates high housing prices, which ultimately make housing less, not more, affordable. It gives you bigger benefits when you make a lot of money and own an expensive home. It's essentially a transfer of money from the young, the poor, and the rural to the old, the wealthy and the urban.

There are a lot of things like this in the tax code: When tax-making powers are exercised by politicians, taxes are generally written in a way that benefits people politicians care about, who tend to be rich and powerful. A simpler tax code - such as a flat tax - would fix that, but politicians hate such proposals because they offer insufficient opportunities for graft.

But hey, paying taxes is patriotic. So I don't expect to hear any complaints from blue-staters. Right?