About to quit Congress, Chaffetz suddenly becomes face of its Trump investigation 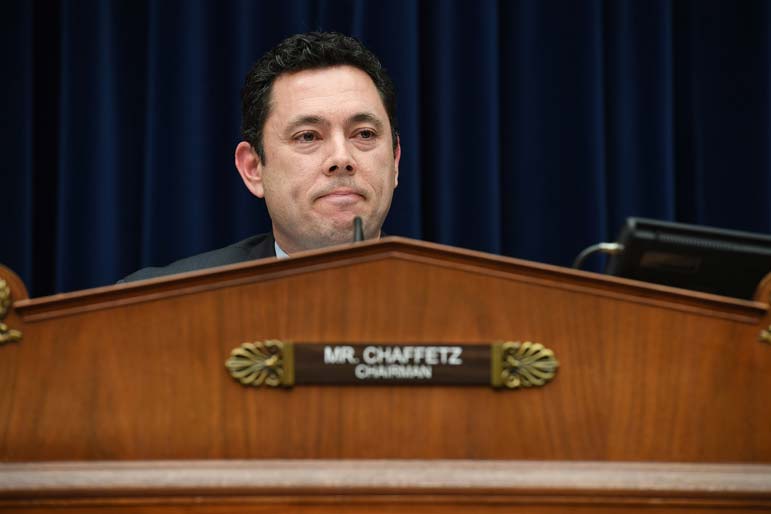 WASHINGTON - A month ago, Rep. Jason Chaffetz, R-Utah, one of the most high-profile House Republicans, was so over this Congress thing.

"After more than 1,500 nights away from my home, it is time," he wrote in a Facebook post in April, surprising the political world by announcing his retirement. "I may run again for public office, but not in 2018."

Later, Chaffetz said he might not even finish his term, which ends in January 2019.

Some surmised that Chaffetz was ditching Congress because he decided it just wasn't fun anymore. As chairman of the House Oversight and Government Reform Committee, Chaffetz is in charge of investigating wrongdoing in the government. And it's more fun to investigate your political opponents wrongdoing than the candidate you supported (somewhat) for president.

But now, there could be wrongdoing in the government, and the guy who had one foot out the door is suddenly all in again.

Hours after news broke Tuesday that President Donald Trump may have tried to intercede an FBI investigation into his then-national security adviser, Michael Flynn, and that a well-respected former FBI director had evidence, Chaffetz sent a letter to the FBI requesting all documentation. Here's part of that letter:

"According to, 'Mr. Comey created similar memos - including some that are classified - about every phone call and meeting he had with the president.' If true, these memoranda raise questions as to whether the President attempted to influence or impede the FBI's investigation as it relates to Lt. Gen Flynn. So the Committee can consider that question, and others, provide, no later than May 24, 2017, all memoranda, notes, summaries, and recording referring or relating to any communications between Comey and the President."

Chaffetz didn't stop there. If the FBI doesn't hand this over willingly, Chaffetz indicated he'd be ready to force it with a subpoena.

"GOPoversight is going to get the Comey memo, if it exists. I need to see it sooner rather than later. I have my subpoena pen ready,' he tweeted.

Gauntlet thrown. Now the rest of House Republicans have to decide if they'll side with Chaffetz that Congress should pursue what Trump allegedly told Comey, wherever the facts may lead. (And it's conceivable those facts could lead to a serious consideration about impeachment.) Or if they'll give Trump the benefit of the doubt.

Suddenly, Chaffetz is in the center of the action - where people who know him say he thrives. Suddenly, Congress is fun again even without Hillary Clinton's emails to investigate. And that's the likeliest reason Chaffetz just made himself the face of Congress's investigation into the possible act of obstruction by Trump just a month after giving up on Congress.

Chaffetz's staff confirmed to The Post that he still plans to leave Congress, but they did not clarify whether he'd stay on until his committee's investigation is finished. Chaffetz's mind-set, they said, is: He'll keep doing his job while he's in the job.

Chaffetz was never really a Trump guy. He ditched Trump after the "Access Hollywood" tapes, saying he couldn't defend that kind of person to his 15-year-old daughter. But in a jaw-dropping 180, a few weeks later, he said he'd vote for Trump:

"I will not defend or endorse @realDonaldTrump, but I am voting for him. HRC is that bad. HRC is bad for the USA."

Chaffetz's decision to reinsert himself into the role of oversight over Trump after declining to do much (to much criticism on the left) feels reminiscent of that late October "I will not defend or endorse, but I do support" moment he had. In each case, Chaffetz firmly decided to go down one track, then he abruptly changed his mind and did the exact opposite. Why?

Well, Chaffetz is a guy whose career appears to be almost singularly driven by ambition. He briefly ran for speaker of the House in 2015. He's more likely than not to run for governor of Utah in 2020.

In October, Chaffetz may well have been disgusted by what Trump said on a hot mic. But he soon calculated that at least voting for Trump, the Republican nominee for president, was a requisite to advancing in the Republican Party.

A month ago, Chaffetz calculated that staying in Congress was a political dud for his political future.

But now, Congress is in the midst of dealing with the biggest political news story in the United States right now, and Chaffetz has just injected himself right in the center of it.

Clearly, Chaffetz has calculated that being in Congress - this Congress - isn't so bad after all for a politically ambitious lawmaker.

Previously:
• 05/17/17 President Trump's defenders on Capitol Hill are wavering
• 05/10/17 Senate Republicans hold the key to what happens next with Trump and Russia. Here's an early rundown of where GOP senators stand
• 03/27/17 Trump's First 100 Days: What's next for Trump and Congress
• 03/27/17 Congressman resigns from Freedom Caucus after health-care drama
• 03/22/17 4 takeaways from Neil Gorsuch's highly politicized confirmation hearing
• 03/08/17 The three GOP factions that could doom Republicans' Obamacare replacement bill
• 02/01/17 DEM-olition: How party's antics may leave them losers, again
• 01/16/17 10 times Donald Trump's Cabinet picks directly disputed him
• 01/05/17 Senate Dems want to block Trump's Supreme Court pick. That may be riskier than they think
• 12/23/16 7 hugely important races for governor that GOPers must guard to cement their almost complete control of America
• 11/28/16 Why down-ballot Dems could be in the minority for years to come
• 11/21/16 10 things to know about Sen. Jeff Sessions, Donald Trump's pick for attorney general
• 11/09/16 Democrats are now basically extinct in the South
• 11/07/16 GOP appears poised to hang on to a near-record-high
• 09/29/16 In the 9th inning, Congress ends Obama's perfect veto game
• 09/27/16 Dems are still not favored to take back the House
• 09/09/16 A shortlist of economic issues in which a lib wouldn't feel guilty voting for Trump
• 07/28/16 Terry McAuliffe's TPP gaffe reinforces several narratives Hillary's been trying to dismiss
• 06/15/16 3 things Congress could do in response to the massacre in Orlando (And none involve guns)
• 06/14/16 Marco Rubio sure sounds like he might be prepared to run for reelection, after all
• 06/10/16 History suggests Donald Trump's big, beautiful border wall may not be so outlandish
• 05/26/16 What Bernie Sanders' new endorsements say about his future plans
• 05/11/16 Ted Cruz built a brand on being the most hated man in Washington. Now what?
• 04/20/16 Has Trump finally realized he can't just bulldoze his way to the White House?
• 03/28/16 Do House Dems have a shot at the majority this year?
• 03/14/16 Undersold: Trump would honor Obama's foreign deals (but make them better, of course)
• 02/22/16 The GOP's Supreme Court strategy is dicey. But its potential payoff is massive
• 02/11/16 Who is John Kasich? Five things you should know --- including how to pronounce 'Kasich'
• 12/21/15 Words of caution to temper Ryan's optimism