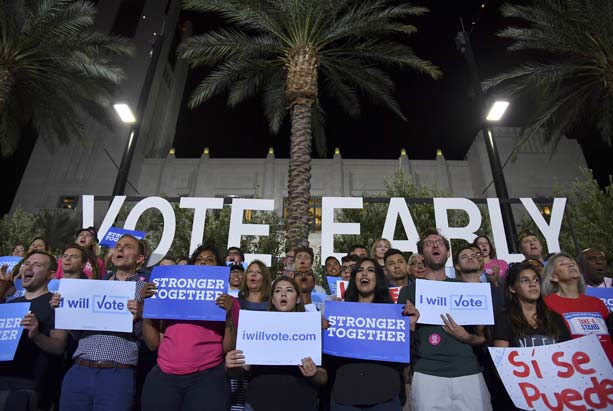 Going into Thursday's special election in Montana to fill the U.S. House seat vacated by Ryan Zinke, now the secretary of the interior, a lot of experts are saying that the misdemeanor assault charges filed Wednesday against the Republican candidate, Greg Gianforte, might not make much difference. If Gianforte somehow holds on to win, blame the absentee ballot.

Gianforte is accused of physically accosting a reporter at his campaign office and wrestling him to the ground. Witnesses back up the allegations, which Gianforte denies. Even granting the presumption of innocence, we can surely agree that the charges alone would ordinarily hurt a candidate at the ballot box. But this time the damage may be small.

Montana is one of 28 states that allow voters to obtain absentee ballots without providing an excuse. Half the state's voters choose this option, and nearly three-quarters of those have already filed. If a Gianforte supporter is now having second thoughts, they come too late. But the inability of voters to process late-breaking news is only one of many reasons that the absentee ballot is in some tension with the norms of democracy.

Before the cascade of eased voting rules over the past three decades, the right to vote was almost always exercised in person. The franchise possessed a communal aspect. Voting was something we did together. Here's political scientist Rick Valelly writing in the New Republic in 1999: "On Election Day, we must leave our homes and offices, travel to a polling place, and physically mingle with people who are plainly our equals that day, no matter what other differences we have."

The expanded use of the absentee ballot has the opposite effect. It emphasizes our separateness. We need not mingle with those who are unlike us. The absentee balloter makes a calculation -- "I cannot imagine anything will come up that will change my mind" -- and does so, I suspect, with full understanding of the risk of error. What the absentee probably does not calculate, however, is the loss of community, the decline of the sense that we are all in this together. It is far easier to despise those who support the candidate on the other side when we never meet them face to face.

One of the virtues of the town meeting form of government that was common in New England in the early years of the republic was that the voters faced each other and heard each other out before casting their ballots. Admittedly we are well past the point when partisans want to hear out the other side. But the physical mingling that Valelly describes would still not be a bad thing.

Here some history is useful. When absentee ballots first became available they were an aberration. Although they did not come into widespread use until the Civil War, various states experimented with them in the first half of the 19th century. Some laws applying only to soldiers were adopted during the War of 1812. Often a registrar, as a matter of discretion, might allow a voter to bring in a ballot on behalf of a relative too ill to make it to the polls.

The laws began appearing rapidly on the books in 1863, as Republicans feared that troops in the field, most of whom supported Abraham Lincoln, would be unable to vote for him the following year. Even in the Union, however, legislatures controlled by Democrats refused to allow absentee voting. This led to Lincoln's letter to General William Sherman, requesting that Indiana troops be furloughed so that they might go home and vote. Although many soldiers did indeed return to their states for the election and others were able to cast ballots by mail, historians tell us that only 15 percent of those on active duty managed to vote. Those ballots went overwhelmingly for Lincoln.

Although the history of absentee voting laws is deeply tied to the need to allow soldiers to vote, many states from early on allowed those who would be out of the jurisdiction and those who were ill to apply -- usually requiring an affidavit under penalty of perjury. In the late 19th and early 20th centuries, however, a number of absentee voting provisions were either repealed by state legislatures or held unconstitutional by state courts.

Progressive opponents argued that laws allowing citizens to vote without showing up at the polling place were subject to abuse and corruption. A 1929 editorial in an Asheville, North Carolina, newspaper complained of "frauds that have made the present absentee ballot law notorious." The 1922 election in Missouri became notorious indeed, when allegations arose that Democratic registrars had distributed absentee ballots after the election day returns were counted. In 1940, supporters of Democratic gubernatorial candidate William H. Burke, who lost by 430 votes out of over 850,000 cast, were certain that the reason was Republican shenanigans with the absentee ballots.

To be sure, candidates who lose close elections often complain, and the great majority of elections under the old rules were conducted without any significant fraud attaching to the use of absentee ballots. But even their strongest proponents never argued that absentee ballots should become available for the asking. When most states greatly liberalized their absentee voting rules during World War II, the new provisions applied only to soldiers on active duty.

I do not recite this history because I am worried about abuse. My point, rather, is that absentee ballots were traditionally difficult to get, and this was a good thing. Some 20 states still require that the voter give an acceptable reason for being unable to get to the polls, and I think this traditional view is correct. Such rules signal the importance of the communal view of the election as an occasion on which we join together physically in an activity of democratic importance. At the same time, a more restricted availability of absentee ballots reminds voters of the importance of continuing to process new information right up until election day.

I have no partisan interest in the outcome of the Montana race. I am quite certain, however, that if nearly every voter had to show up in person, the charges against Gianforte would cost him dearly. With so many Montanans having already sent in ballots they can't take back, however, we might well see more evidence of how powerfully our rejection of community affects the outcome of elections.