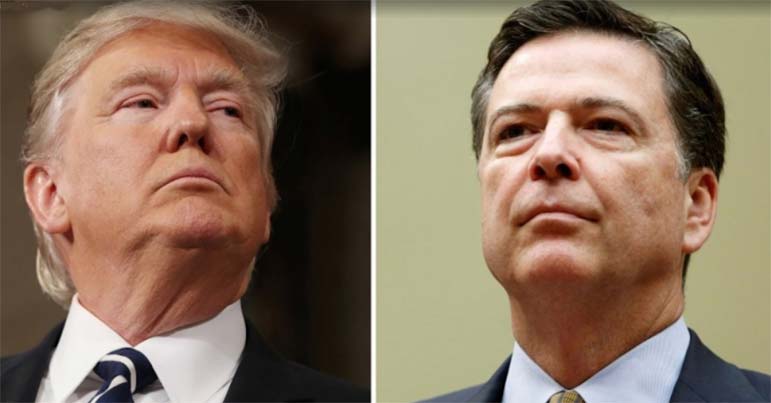 It was big news to the rest of us. To Matthew Miller, it was as predicted.

One thing I learned at DOJ about Comey: he leaves a protective paper trail whenever he deems something inappropriate happened. Stay tuned. https://t.co/sENlYyhL5B

Given that foresight -- and Miller's experience in the DOJ during the Obama administration -- I thought it worthwhile to find out what else he saw coming down the pike. As you'll see below, he thinks that this is the tip of the spear and that Comey's actions suggest he may have been building a legal case against the president of the United States.

Below is our conversation, edited lightly for clarity and length.

Q: You were pretty prescient in noting that the Comey memos would come back to bite Trump -- saying "stay tuned." How widely known are Comey's note-keeping habits? Is it exceptional in some way?

MILLER: I don't think it's exceptional either for an FBI director or for anyone at the FBI or at the Justice Department. If they have a conversation with someone where the other person raises something inappropriate, it's a pretty standard practice to then write a memo to the file, basically, putting that down. There were times when I was at Justice when I got phone calls from people that would make inappropriate requests of me, and I would usually tell them, "That's an inappropriate request; I can't do that." And then I would send an email to my deputy after the conversation describing it, so if anyone ever asked about it, there was a record of exactly what happened and that I didn't do anything wrong.

Q: And so you would generally not only write the memo, but you would talk to somebody about it in real time?

MILLER: I think people do it different ways. You can either just send a memo to the file and just kind of keep it to yourself, or the safer thing is to actually memorialize it, either in a conversation or a written record with someone else at the Justice Department.

Q: What kinds of things are usually in these notes? Is it a pretty straight recounting of the conversation, or will they also include things like, â€˜Well, I think this may have been illegal?'

MILLER: I think it completely depends on the conversation and the person you're having it with. It's a very different thing if someone outside the Justice Department calls you and asks you to find out the status of an investigation, and you tell them no. That's one thing -- versus the president of the United States telling you to quash an investigation. In the orders of magnitude of wrongdoing and impact, they're two very different things.

Q: So that would definitely raise a red flag for Comey.

MILLER: Yeah. And Comey -- he might have had two motives here. One is, when you're put in this situation, you want to make a record, so if the other side ever tells their story, you can pretty clearly demonstrate with contemporaneous records that you acted appropriately.

I keep wondering -- something in the back of my head keeps saying to me -- maybe Comey was actually trying to build an obstruction-of-justice case against the president here. You know what I mean? Because Comey could handle this one of two ways: The president makes this request, and the first time Comey might say to him, â€˜You know, Mr. President, it's inappropriate for us to have this conversation, and I would appreciate if you would not make a request like this to me again.' That's a way to handle it that says very clearly to the president that this should never be repeated.

But if you're trying to build an obstruction-of-justice case, you might want the president to keep talking, because everything he does is digging a deeper legal hole for himself.

Q: And that would be, ostensibly, a reason for him not to resign after that first conversation, as some people have suggested he should have.

MILLER: That's exactly right. You have to remember, the president in that letter firing Comey said, 'You told me three times I wasn't under investigation.' We have no idea if that's true or not. But I think it's also a little bit of a red herring, because the president's campaign is under investigation. He is obviously the head of his own campaign, and when the Justice Department investigates any organization -- whether it be a Mafia organization, a cartel or just a corporation -- you're always investigating and looking to make a case against the highest person possible. So they would always have in their minds, â€˜We have no idea where this is going, but at the end of it, it could reach the very top of the campaign.'

So in that particular circumstance, Comey might have wanted him to keep talking to see what he says.

Q: A lot of this could come down to how much Comey wants to fight this battle with the president. Is there anything in his past that leads you to believe he would willingly and proactively want that fight?

MILLER: Yes. Look, there's one thing I agree with the president on: That Comey is a showboat. You just look at his actions in the [Hillary] Clinton case, where he made himself the central player when there was no reason for him to be the central player. That aside, his entire history shows that he likes to be at the center of attention. You look at the Ashcroft bedside incident where that unfolded in one of the most dramatic congressional hearings in history. And it was pretty clear at the time that that hearing had been pretty well planned by Comey and by Preet Bharara -- to uncover real wrongdoing by the Bush administration -- but also to present Comey in a very favorable light.

(Note: Bharara was then counsel to Sen. Charles E. Schumer (D-N.Y.). Earlier this year, Trump fired him as U.S. attorney for the Southern District of New York, after Bharara declined Trump's request to resign by saying Trump had promised to keep him in the job.)

Q: It had the bonus of that.

MILLER: Right. And honestly, I think that's what he had in mind with his July press conference on the Clinton emails last year. I think he is a man of integrity, but he also thinks of himself very much as a man of integrity and likes the spotlight that highlights that. And he's going to enjoy the spotlight of a congressional hearing when he inevitably testifies. . . .

We have no idea who made the decision to leak this, whether it was Comey himself or it was people at the FBI. And we don't know what their complete strategic goals are. But if you were really looking to damage the president, you wouldn't leak the most damaging memo first. So who knows what comes next?

Q: Are there other instances in recent years, whether with Comey or anybody else, where these contemporary notes were really important?

MILLER: There's one involving Comey that I actually had in mind when I sent that tweet last week. In 2005, the Bush administration was authorizing -- or reauthorizing -- waterboarding and other torture tactics. And Comey had signed off on it as a deputy attorney general. But in addition to signing off on it, he had a meeting with Attorney General [Alberto R.] Gonzales and laid out why he thought it was a bad idea for the government to torture people and how it would make the government look bad and call into question the credibility of everyone involved. And not only did he have the meeting, but he memorialized it in a meeting with his chief of staff, where he said exactly what he had laid out to the attorney general.

We know this because in 2009, when the Office of Professional Responsibility at the DOJ was investigating this issue and the New York Times wrote a story about it, magically Comey's email to his chief of staff appeared in that story -- and made its way to OPR. I was at DOJ at the time, and what it told me was Comey had the presence of mind to write the email in the first place, print a copy of it when he left the department, sit on it for four years and be ready to give it to a reporter when someone questioned why he had signed off on torture. . . . I remember watching it and thinking, "This is very instructive of how Comey operates inside a bureaucracy."

Q: What reason might these notes or memos not become public?

MILLER: One of the tests of the next few days is whether DOJ will try and block the FBI from turning these over to Congress. I think we can guess that the FBI, left to its own devices, is going to want to turn them over, but Sessions and [Assistant Attorney General Rod J.] Rosenstein may try to block that. They could cite a number of privileges.