Method To The Madness 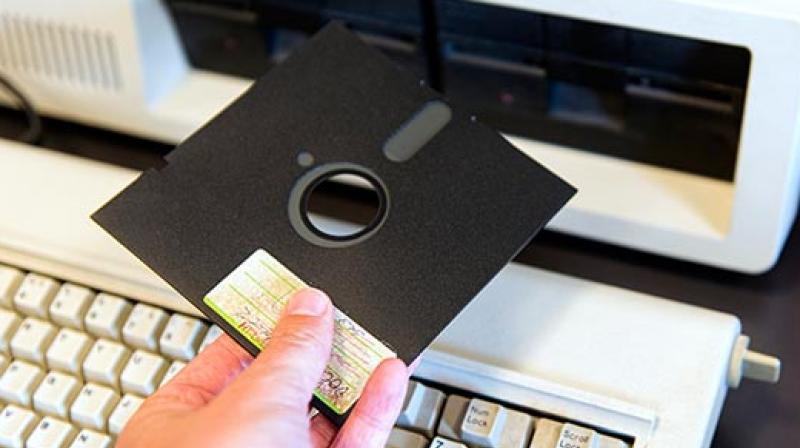 America's nuclear arsenal depends on a surprising relic of the 1970s that few of us may recall: the humble floppy disk.

It's hard to believe these magnetic, 8-inch data storage devices are what's propping up the most fearsome weapons humanity has ever created. But the Department of Defense is still relying on this technology to coordinate key strategic forces such as nuclear bombers and intercontinental ballistic missiles, according to a new government report.

The floppy disks help run what's known as the Strategic Automated Command and Control System, an important communications network that the Pentagon uses to issue launch orders to commanders and to share intelligence. And in order to use the floppy disks, the military must also maintain a collection of IBM Series/1 computers that to most people would look more at home in a museum than in a missile silo.

This isn't the first time we've heard about the military's reliance on seemingly archaic tech: back in 2014, the U.S. Air Force showed CBS's "60 Minutes" one of the top-secret floppy disks that helps it store and transmit sensitive information across dozens of communications sites. So to hear from the Government Accountability Office that the Pentagon has still not phased out the technology - and doesn't plan to until the end of fiscal year 2017 - is remarkable.

Still, there is a major reason - other than simply being behind the times - for the military's continued use of floppies: Sometimes, it says, low-tech is safer tech, because it can't be hacked.

That may come as a surprise at a time when digital technologies have almost completely superseded analog ones - heck, some companies literally give away USB flash drives these days because they're so cheap. It highlights the yawning gulf between consumers and government -- and sometimes huge differences between branches of the U.S. military. But more importantly, it reveals how urgently the government needs not just newer technology, but technologically savvy people who can think differently.

The Obama administration has pushed strongly to use technology more widely in government. From opening up stores of public data to creating a whole website for Internet petitions, President Obama has tried to make government more tech-savvy. And yet it's still not enough. Speaking at the South By Southwest Interactive festival in Austin earlier this year - marking another first for the White House - Obama's pitch to geeks and coders was simple: Join us.

"The reason I'm here is really to recruit all of you," he said.

Obama believes bringing smart engineers into public service requires making the government an attractive alternative to the private sector, which boasts high salaries and the excitement of startup culture has lured many new graduates to Silicon Valley. Data from Carnegie Mellon University and the Massachusetts Institute of Technology show how difficult it is for government to attract top tech talent. In 2015, only 1.1 percent of MIT graduates took jobs in government. Of that year's graduates at Carnegie Mellon, only a handful took jobs at government agencies - and all of those were abroad, in places such as Singapore and South Korea.

Colleges and universities are also coming up short in terms of training America's next generation of digital warfighters. Information security training is not required at any of the nation's top-10 computer science programs. The sluggish talent pipeline doesn't make the Pentagon's task of tripling the U.S. Cyber Command's workforce any easier, either.

The military's investments in cybersecurity illustrate how some parts of the Department of Defense have made deep commitments to technology, even as other parts, such as America's nuclear forces, have lagged behind. The U.S. Navy and Air Force are both highly interested in autonomous drones. Unmanned vehicles have the potential to lurk quietly underwater and survey the enemy, or to supplement human pilots in the air.

But high-profile examples have also arisen showing how the military can regard technology too optimistically, revealing some of the risks of embracing it. For example, the F-35 Joint Strike Fighter was envisioned as a flexible, all-purpose craft that could suitably serve every branch of the U.S. military. Instead, it's become a costly, time-consuming experiment that - according to multiple reports over the years - doesn't even work. Its parts wear out before they're supposed to. It can't defeat older planes in dogfights. It's vulnerable to hacking. And that's before the fighter has ever encountered any real enemies.

There are parallels here to fiction, which can be just as instructive. In the 2004 hit TV series "Battlestar Galactica," humanity comes under assault from robots that it created. Much of the human space fleet is taken by surprise, crippled by a robot-built computer virus that spreads from ship to ship thanks to the sophisticated networks linking the crafts together. Only the Galactica, an obsolete warship due to be mothballed, survives the initial surprise attack. Why? Because the Galactica's systems were not part of the humans' IT network, sparing it from the virus that disables the rest of the fleet. The lesson seems clear: Sometimes, newer is not better.

As it happens, a similar logic underpins the U.S. military's continued use of floppy disks. The fact that America's nuclear forces are disconnected from digital networks actually acts as a buffer against hackers. As Maj. General Jack Weinstein told CBS's "60 Minutes" in 2014:

Jack Weinstein: I'll tell you, those older systems provide us some -- I will say huge safety when it comes to some cyber issues that we currently have in the world. Lesley Stahl: Now, explain that.

Weinstein: A few years ago we did a complete analysis of our entire network. Cyber engineers found out that the system is extremely safe and extremely secure on the way it's developed.

Stahl: Meaning that you're not up on the Internet kind of thing?

Weinstein: We're not up on the Internet.

Stahl: So did the cyber people recommend you keep it the way it is?

In other words, the rise of hackers and cyberwarfare is exactly why even technologically obsolete systems can still serve a valuable purpose.

The Pentagon aims to install upgrades to its systems over the next year. And there are good reasons - even seemingly obvious ones - for doing so. But just as upgrading your laptop's operating system on the first day can come with unexpected bugs, our nuclear commanders appear to take a similar caution to embracing the latest and greatest. Perhaps that's for the best.

Previously:
• What happens when a top privacy and security regulator falls for an email scam?
• The infuriating rule American Airlines won't tell you about until it's too late