It's finally over! The future wins in a legal battle over Jewish history 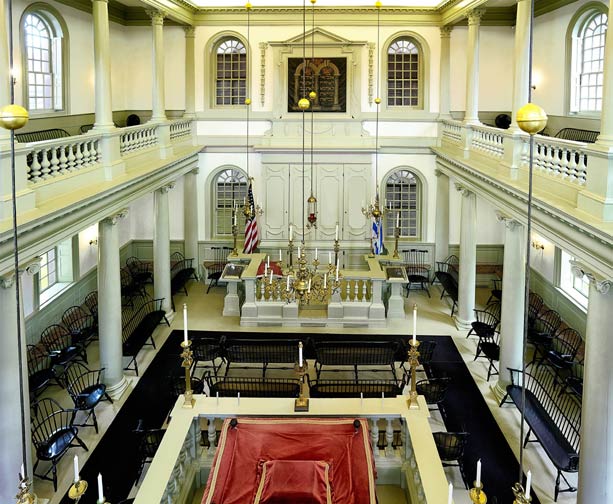 You never actually own a synagogue. You merely take care of it for the next generation. That's the essence of a 106-page court decision that's transferred control of the historic Touro synagogue in Newport, Rhode Island, from a New York City congregation to a local one seeking to revive the institution's religious life.

Seen through the lens of Jewish-American history, the decision is both correct and symbolically important. It emphasizes the future over the past, refusing to treat Jewish spaces and objects as relics and instead making them into investments in the future.

The Touro synagogue, completed in 1763, is the oldest operating synagogue building in the U.S. But it hasn't operated continuously -- which is part of the reason for the lawsuit. Built in Newport's commercial heyday, when the city was among the richest in North America, the synagogue stopped holding services between between roughly 1793 and the 1870s. (The famous exchange of letters between the synagogue's leader, Moses Seixas, and George Washington, took place in 1790.)

The reason was the lack of a Jewish community. The Jews who built the synagogue and started the congregation were mostly of Spanish-Portuguese descent, part of the remnant of Iberian Jewry who survived the expulsion of 1492. They left Newport when the city's economy and population declined precipitously after British occupation in the Revolutionary War.

At the time, there were just a few Jewish communities in the U.S., in cities including Philadelphia, Charleston, Savannah, and New York City. Newport's Jews joined the Spanish-Portuguese Jewish community in New York, then and now organized into a congregation called Shearith Israel, "the remnant of Israel." They brought with them the Touro synagogue's Torah scrolls and movable valuables.

Most important of these is a pair of intricately worked silver finials -- "rimonim" is the Hebrew term, which literally means "pomegranates" -- designed to adorn the twin posts of a Torah scroll. The Touro finials were designed by the leading revolutionary-era New York silversmith Myer Meyers, himself a member of the New York Jewish congregation. The New York congregation carefully preserved the finials, branding them with the words "Newport" to avoid confusing them with a similar pair that Myers designed for the New York synagogue.

Today the finials are considered a masterwork of design and a hugely important artifact of early American Jewish history. They've been on loan to the Museum of Fine Arts in Boston, which has displayed and offered to buy them for its permanent collection at the price of $7.4 million.

In the 1870s, Eastern European Jewish immigrants began to move to Newport -- and a conflict began between the new Jewish community and the elite Spanish-Portuguese Jewish community in New York. At first the New York congregation, Shearith Israel, appointed and paid for a rabbi to hold services in the Touro synagogue, which was now reopened. Around this time, the finials went home to Newport.

But the Newport congregants wanted to worship according to Eastern European liturgy rather than following the distinctive rites and tunes of the Spanish-Portuguese Jews. The difference was not so much about the text of the prayers as about their cultural style. The Spanish-Portuguese ritual is, if you will, high-church Judaism, featuring precise attention to notation, professional quality choral music, and grave decorum. Worship in the traditional Eastern European Jewish style tends to be more collective, devotional, and to an outsider, almost shockingly casual in the intimacy with which the worshiper addresses both G0D and fellow synagogue attendees.

The fight between the two communities briefly got ugly, but a compromise allowed the Newport Jews to use the Touro synagogue for the entirety of the 20th century in exchange for agreeing to follow the Spanish-Portuguese rite there. Legally, control over the synagogue rested with the New York congregation, which had obtained documents from the last surviving members of the original Newport congregation transferring their interests to New York.

The peace was broken when the Newport congregation, in desperate financial straits after 2008, proposed to sell its chief asset, the silver finials, in order to endow the synagogue in perpetuity. Now the New York congregation objected -- and claimed control and ownership of the heirloom finials.

It's appropriate to feel sympathy for both sides in the dispute. The New York congregation, proud bearer of a great tradition and a sound fiscal position, didn't want a Jewish communal artifact to be sold at the auction block and to end up in the hands of a museum, where it would likely never again be used in religious ritual. The finials were made to be used for a sacred purpose, not to be admired in a display case.

The Newport congregation wanted to stay alive. That's a deep Jewish tradition, too -- as is the willingness to part with sacred relics and spaces to perpetuate worship and study.

The key to the judge's resolution of the case was the moving last will and testament of Jacob Rodrigues Rivera, dated 1787. In that remarkable document, Rivera, a member of the Newport congregation whose name was on the synagogue deed, stated that he had "no exclusive right or title" to the property but rather considered himself a trustee of the "Jewish society in Newport" so it could use the synagogue "as a place of public worship, forever."

At a distance of almost 230 years, the judge in Rhode Island's district court read the will as conclusive proof that the synagogue had always been held in trust for the benefit of Newport's Jews to have a place of prayer. By extension, the New York congregation also held the trust for the Newport community's benefit. The judge officially transferred the trust to the Newport community, allowing them to sell the finials and save the synagogue for use.

That decision points Newport's community in the right direction: to the future. Preservation of the Jewish past is important, but in case of a tension between looking backward and looking forward, Jewish religious tradition emphatically chooses the latter. It would be nice if the finials still adorned a useable Torah scroll in an active synagogue. But what matters in the end isn't the decoration on the scroll, or even the physical scroll itself. It's the words of the Law -- which, in the memorable phrase of the Talmud, may soar in the air even when the parchment burns.