To Command Without Having Served 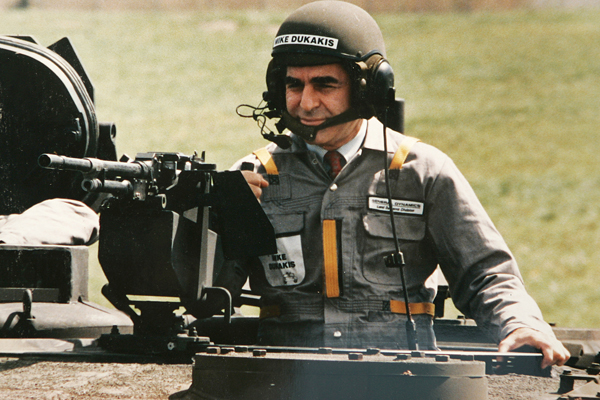 Even Michael Dukakis served in the military, those this tank-ride back in 1988 didn’t serve him all that well.

All Hail President Emperor Caesar – and the other 300-plus White House hopefuls.

It’ll be a busy week in presidential politics, what with three Republican hopefuls making their candidacies official in the next few days.

1) Dr. Ben Carson. After traveling the nation the past six months, looking to all the world like a presidential candidate, the retired neurosurgeon will make his announcement Monday at the Detroit Music Hall Center for the Performing Arts (then it’s off to Iowa). Why Detroit? It’s Carson’s boyhood home and plays a big part in his story of personal growth (poor inner-city child becomes world-class neurosurgeon). As he recently told a Detroit News interviewer: “My mother was so disappointed that I was a poor student, that she didn’t know what to do. She prayed to G0D for wisdom. And he gave it to her: to turn off the TV and make us read books.” Of note: as the only African-American in the GOP field and at a time when the Republicans are in dire need of expanding their base, can a black icon like Carson develop a multiracial political following?

2) Carly Fiorina. That same day, Carly Fiorina likewise is expected to formalize her candidacy (the former Hewlett-Packard chair is scheduled to appear on ABC’s Good Morning America to talk about her campaign and her new book). Californians who remember her failed U.S. Senate run scoff at her presidential bid. What they overlook: her life’s journey is the stuff of real flesh and blood (cancer survivor, started out as a “Kelly girl”) and plays well to less jaded electorates. Like Carson, Fiorina’s also a standout: she’s the lone woman in the field. Perhaps that’s why she has the most combative words to say about that other woman who’s seeking the presidency. Here’s what Fiorina declared at this weekend’s National Review Institute Ideas Summit: "We can't let [Hillary Clinton] run on the stuff that she wants to run on - and we all know what she wants to run on. If I were the nominee, I will not falter . . . and I will land every punch and on the ground where she has to explain her transparency, her policies, her track record - ladies and gentlemen, on that ground we can win this fight."

3) Mike Huckabee. The former Arkansas governor and Fox News host will jump into the race on Tuesday, His venue choice: Hope Arkansas — yep, the same Hope that gave us Bill Clinton. Which also makes for an easy kickoff speech: denouncing the Clintons’ Arkansas tenure. Two things to mote about Huckabee: (a) he’s folksy and likable, which could again pay dividends in Iowa: (b) as this video shows, he has a unique way of communicating — with passages such as this: “”Every day of my life in politics was a fight and sometimes it was an intense one. But any drunken redneck can walk into a bar and start a fight. A leader only starts a fight that he’s prepared to finish.”

btw, once these three candidates make it official, you’ll hear a lot of media talk about six Republicans in the field (Carson, Fiorina and Huckabee + Cruz, Paul and Rubio). Actually, it’s more like nearly six-dozen Republicans, give or take a view.

One of the blessings (or curses) of this country is it doesn’t take much to run for the presidency. All a man or woman of proper age has to do is fill out a one-page document called the FEC Form 2 — that, and an FEC Form 1 if you plan to accept more than $5,000 in campaign contributions.

As you’ll see here, lots and lots of Americans have taken advantage of the easy form-filing — so far, over 300 men and women are on the FEC’s list of “Form 2 candidates”.

And what a field it is: there's a Dean (Daniel, not Howard), two Edwards (Katee and Jenny, but no John), a Johnson (Barry Lester, not Lyndon), a Moynihan (Shawn Stephen, not Daniel Patrick), a Scarborough (Larry, not Joe), and a Ventura (Andre, not Jesse).

There’s a Republican named Paul Debow, who would seem the perfect running mate for a certain pro football quarterback with the same-sounding last name.

For those of you looking for tough-on-crime types, we have James 'Titus the Great" Law and Brenda Dawn Justice.

If you prefer a candidate who appreciates how good he has it, we have a George Bailey.

And there’s my favorite: President Emperor Caesar. a Democrat from Cape Coral, Fla., and a veteran of the 2008 and 2012 elections.

We can only assume that he’d have a better working relationship with the Senate than did Julius . . .