Will the Clintons' bills ever come due? 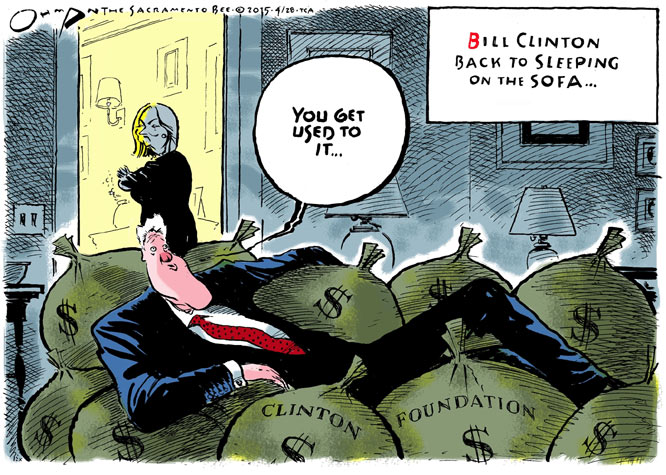 Whether you like it or not, are America's wicked grandparents.

And some grandparents -- even fabulously wealthy and wicked people like the Clintons -- just don't have time for wasteful activities like binge-watching "The Good Wife."

They must pay the bills.

Yet unlike the rest of us who didn't make a fortune from government, the Clintons won't have to work until they die. So they won't have to pour their haute sauce on dry dog food to make it tasty when they retire.

And even though they're determined to drag the nation through another gutter -- this one about cash and foreign governments and influence peddling, as alleged in a book out Tuesday called "Clinton Cash" -- the Clintons keep working.

If you had been accused of a smidgen of what they have been accused of, you'd blush. But the Clintons don't blush. It's as if their skin is made of bark, and it refuses to betray them with demonstrations of shame.

So she climbs ruthlessly toward a Clinton Restoration in the . If you really want a tingle, just think of the West Wing right after her inauguration:

Handel's "Water Music" will play in the background, and Bill will stand just a few steps below her, resplendent in his tartan kilt as First Laddie. And Hillary will be pale and powdered, like in "Dangerous Liaisons," a thin smile on her lips, sitting straight-backed on America's Iron Throne.

But to make it all happen, Bill keeps hauling in at least per speech, the money coming perhaps from good people who just want to help mankind, or maybe it's from sleazy influence brokers helping the Russians buy up all the American uranium in .

So why does Bill keep taking the money that most of us, Democrats and Republicans, would consider too moist to touch? Because he says there's nothing wrong with it. There is no proof, he says.

Besides, the man's got bills.

"Yeah," said when asked by if he would continue taking the soggy cash. "I gotta pay our bills."

I guess that all depends on what the definition of "pay" is.


I heard that and wondered: Does he really want his wife to win the American presidency? It doesn't sound like it to me.

Hillary in office would eclipse him. He knows this. So he mouths something ridiculously stupid, like "I gotta pay our bills," which reminds us of her equally foolish comment about how poor she was when she left the , as if she were impoverished Match Girl on the bridge in the snow.

I'm not a cigar-smoking discredited psychiatrist, but Bill's remark sounds like a Freudian slip.

It's as if Bill were encouraging liberals to get in and challenge them, such as former Gov. or Sen. .

They're much more liberal, but better candidates than Hillary.

Of course, if either of the hard liberals gets in, then the Jeb Bush Neoconservative Big Republican Government War Machine will ramp up. And will play the Establishment Republican jester on , a vengeful harlequin, hunting down the few conservatives who remain.

By then I should be safely hidden in either or .

Perhaps I've read too much into Clinton's "I gotta pay our bills" comment. Perhaps Freud was right. Perhaps cigar is sometimes just a cigar. Or not, right, Bill?

Either way it was pure Bill, a man talented enough to kiss his own behind while being interviewed in about his foundation's work.

"Even though the criticism at home rumbles," the reporter gushed, "the heartwarming stories here in are undeniable."

The stories certainly were heartwarming. There's nothing quite like impoverished, hearing-impaired African children as props in a Clinton political story. Perhaps they'll finally hear his magic words.

But wanted the quote, and Bill wanted to showcase his good works.

That was the Clinton smile. But now it's time to see the Clinton war face. They know how to attack, and they'll attack the book "," written by a Republican.

However, The , and other news organizations have vetted the allegations made in the book, and they're not by any stretch Republican tools.

My question: Have Democrat primary voters become so coarsened by the Clintons that they'd buy the nonsense Bill is selling?

"People should draw their own conclusions," told . "I'm not in politics. All I'm saying is the idea that there's one set of rules for us and another set for everybody else is true."

not in politics? What is he then, a member of The Avengers?

Bill's superpower must be the ability to blow hot air into the ears of American voters and wipe their memories clean. Actually, that's more mutant than hero.

If all were right with the world, Hillary and Bill would be retired somewhere, perhaps even in the same house, watching "The Good Wife."

You can see them cuddling, Hillary giving Bill a sharp elbow when on screen it becomes clear that the sleazy fictional husband really doesn't want his estranged good wife to win her election.

"Oh, Bill," she murmurs sweetly, while grinding that elbow into his ribs.

"Come on, darlin'," he says, biting his lower lip, "I just gotta pay our bills."