What Dems can learn from Emmanuel Macron 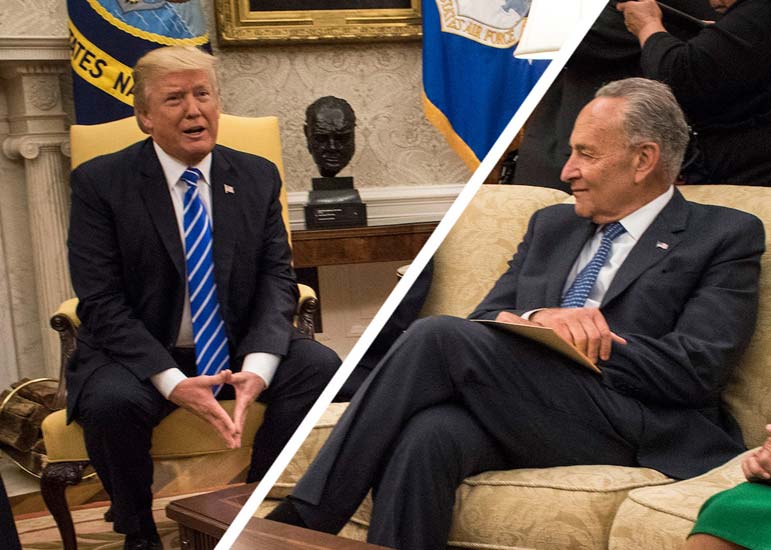 WASHINGTON -- Emmanuel Macron and President Trump don't agree on much.

Macron is a globalist; Trump is a nationalist.

Macron is a free-trader; Trump just imposed protectionist tariffs on steel and aluminum.

Macron wants the United States to remain in Syria; Trump wants to get out.

Macron wants to preserve the Iran nuclear deal; Trump wants to scrap it.

Macron wants the United States to rejoin the Paris climate deal; Trump withdrew from the accord.

And yet there they were, the French and American presidents air-kissing on the White House portico, clasping hands at the podium of a joint news conference, clutching arms as they walked down the colonnade and clinked glasses at the first state dinner of the Trump presidency.

"He is perfect," Trump declared of Macron (after brushing what he said was dandruff off of the French leader's suit). The displays of amity have left Washington and Paris agog at le bromance.

How can two men so diametrically opposed get along so well? Simple. Macron holds his ground on issues that matter to him, but he treats the president of the United States with respect -- and has found his respect reciprocated.

Democrats in Washington should try it.

In a toast at the state dinner, Macron explained his approach this way: "We both know that none of us easily changes our minds, but we will work together, and we have this ability to listen to one another." Wouldn't it be refreshing to hear Senate Minority Leader Charles E. Schumer, D-N.Y., or House Minority Leader Nancy Pelosi, D-Calif., say the same? At the end of his visit, Macron was asked how he could have such a warm relationship with Trump while disagreeing with him on so many issues. "It's the same thing in all families," he said. "Let's share the disagreements ... To just say 'I disagree and I don't want to speak with you' [is] ridiculous."

After Macron delivered an address to Congress in which he warned against the dangers of "isolationism, withdrawal and nationalism," many suggested that his speech was a "rebuke" to Trump. No, it wasn't. Macron didn't rebuke the president; he expressed respectful disagreement on a host of issues. Too many in Washington can no longer tell the difference.

Instead of simply applauding Macron's words, perhaps Democrats ought to emulate Macron's actions. Today, the Democratic Party is no longer the opposition; it is the self-proclaimed "resistance" that considers its job to stop Trump from doing or accomplishing anything. Even in areas where both parties traditionally cooperate, such as the approval of qualified nominees, Trump's candidates face near unified Democratic opposition.

While cooperation on difficult issues such as tax cuts or Obamacare may be a bridge too far, Democrats are so blinded by their contempt for Trump that they cannot bring themselves to work with him on issues where they profess to agree, such as infrastructure or extending protections under the Deferred Action for Childhood Arrivals program. These failures hurt the millions of ordinary people who depend on leaders in Washington to work together for the good of the country.


Macron's visit has shown that it does not have to be this way; people can vigorously disagree and still find ways to work together. We have no way of knowing what, deep down, Macron really thinks of Trump. Perhaps the warmth between them is genuine -- modeled, as Macron suggested in his address to Congress, on how Lafayette and Washington "forged a tight relationship fueled by respect and affection." Or perhaps Macron has chosen to behave with respect and decency for the good of France and the world, because he knows the stakes are too high to do otherwise.

Democrats might want to do the same. Here at home, there is no shortage of critical challenges Republicans and Democrats need to address -- and the stakes are also too high to indulge feelings of contempt.

Perhaps it's too much to expect a Trump-Schumer bromance, or Trump-Pelosi air kisses. But Macron's visit should provide a lesson for Democrats: It's amazing what you can accomplish when you treat the president of the United States with the respect and dignity his office deserves. To which I can only say: Vive la France!