What a D.C. lawmaker's inbox looks like after saying Rothschilds control the climate 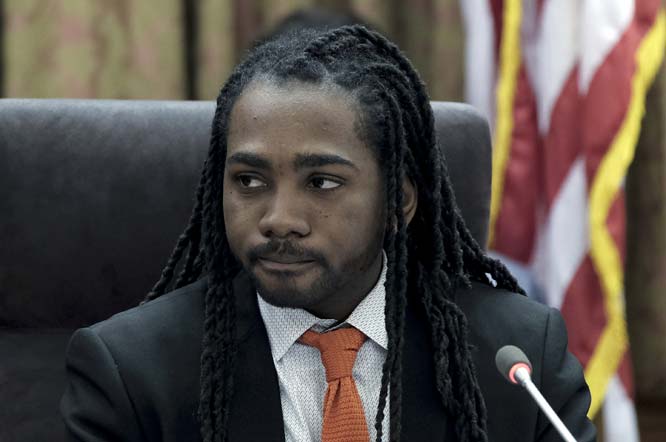 WASHINGTON --The Washington, D.C., lawmaker who saw a brief snowfall and claimed that a Jewish banking family controls the climate set off worldwide outrage and condemnations from fellow politicians.

But his inbox also filled up with praise.

"You have just won the hearts of thousands of good people across the U.S. who have been working for years to hear any elected official speak public truth about controlled weather," a man from the San Francisco Bay Area wrote in a March 20 email to D.C. Council member Trayon White.

"Takes quite a bit of courage to be in a public position to tell the truth," an anonymous person wrote a day earlier. "I wish every politician were so inclined to actually be honest."

White echoed their views in a March 16 Facebook video in which he urged his followers to "pay attention to this climate control" and said "Rothschilds contro[l] the climate to create natural disasters they can pay for to own the cities."

The Rothschilds are a famous European business dynasty descended from Mayer Amschel Rothschild, an 18th-century Jewish banker who lived in what is today Frankfurt, Germany. Over the years, the family has repeatedly been the subject of anti-Semitic conspiracy theories alleging that they and other Jews clandestinely manipulate world events for their advantage.

In the days after his comments were reported, White heard from more than a hundred supporters, critics and at least one person who said he is a member of the Rothschild family. The emails were released as part of a public records request.

White has since disavowed his view that the Rothschilds control the weather and has embarked on an apology tour that has included a bagels-and-lox breakfast with Jewish leaders and attendance at a Passover Seder. He also will visit the U.S. Holocaust Museum.

But many of the conspiracy theorists who contacted him, from California, Vermont and beyond, said they believed he was forced to apologize because of political pressure.

"I wish you had not apologized - I can only assume you were threatened," a woman wrote.

The host of a radio show that has had segments on psychic vampires, UFOs and "orgone energy" requested an interview to discuss White's comments and the "extreme reaction from 'journalists,' " noting that the program director was "supportive of your situation." White did not go on the show.

Several who emailed to defend White said he was a victim of political correctness.

But far more people blasted the councilman for the anti-Semitic nature of his comments and for believing that any entity could control the climate.

"My father's entire family was killed in the Holocaust so comments like yours open, and will continue to open, deep wounds," a woman from New York City wrote.

Another woman, who identified herself as a Jewish constituent, wrote to White, "Knowing that you seriously think humans can control the weather is alarming, but knowing that you think I am part of a vast conspiracy is offensive."

Some directed racial slurs at the African American lawmaker.

Owen Rothschild, a George Washington University student who said he is a descendant of Mayer Rothschild, wrote that White should apologize to the family.

"During the Second World War, there were units of the SS whose sole purpose was to hunt down members of my family, because Adolf Hitler was able to convince his followers that my family was evil," wrote Rothschild, referring to a segment of Hitler's military. "As you know, we are in a heated political climate with the current administration and anti-Semitic comments can not be tolerated."

When he was in high school in Louisiana, a classmate asked Rothschild if his family owns the world. At George Washington, a fellow student ranted about how Ivanka Trump supposedly dated a Rothschild.

"Typically whenever I hear it, at some point you have to let it roll off your shoulders," said Rothschild, who says he's distantly related to the fifth son of Mayer Rothschild. "But this is in D.C. It hit closer to home."

Rothschild said he never heard back from White, who also didn't respond to The Washington Post's request for comment.

White has repeatedly refused to answer questions about his news sources and how he came to believe that the Rothschilds controlled the weather. At a February breakfast of top city officials, he casually mentioned that the Rothschild family controls the federal government and the World Bank - comments that went unchallenged.

After those remarks were reported, White suggested he had confused things he learned while researching the city's participation in the Rockefeller Foundation's "Resilient Cities" program to help cities plan for disasters.

"Somehow, I read and misconstrued both the Rockefeller and Rothchild [sic] theories," he wrote in an apology to fellow lawmakers. "At that breakfast, I indeed misspoke, was really misinformed on the issue and ran with false information. I think I heard other similar information before about the theory around the World Bank and put it all together."

Several Jewish community leaders in the Washington region have urged forgiveness for White because he has been making an effort to understand anti-Semitism and why his comments were hurtful.

Some of those who emailed showed flashes of humor.

"Boy if the Councilman only knew how many bagels and lox I had to buy to control the weather tomorrow," one man wrote before the (forecast) winter storm on the first day of spring.