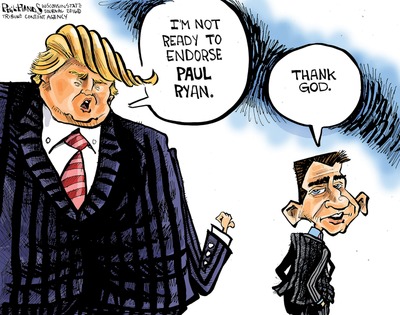 Hey, Trump critics, don't get your hopes up that House Speaker Paul Ryan, R-Wis., freed from the bonds of reelection and of caring about what happens in Washington next year, will suddenly become the GOP's next anti-Trump.

It's clear to anyone watching that Ryan has been frustrated with President Donald Trump. Ryan has spent more time than he'd like criticizing or speaking out against something the president has said or done.

Over the past year and a half, Trump demonstrated an uncanny ability to launch into a major distraction or controversy just as House Republicans were gaining their stride. Just one example: Ryan's chamber passed a bill to help Trump crack down on "sanctuary cities," but that got swallowed up in the news when Trump tweeted the very same day about a TV anchor getting a facelift.

Despite all the reasons for Ryan to be frustrated at Trump, criticizing the president any more than he has to is just not his style. Peacemaking rather than bomb-tossing has been Ryan's strategy until now, and from Ryan's perspective, it's worked.

During Ryan's brief tenure as speaker in the Trump era, he managed to get a tax bill signed into law and passed an Obamacare repeal bill through the House, all while allowing himself room to say the president was wrong to compare white supremacists and counterprotesters as equally valid last summer in Charlottesville, Virginia.

There's no indication that Ryan will suddenly express his private frustrations about Trump in public now that tax reform isn't on the line. He has given every indication that he wants to leave Washington with as unified a Republican Party as possible. That generally means not having the speaker of the House openly speaking his mind about the president.

At a news conference Wednesday publicly announcing his decision to retire, Ryan passed on opportunities handed to him by reporters to go beyond the ways he's already differed from Trump.

"I'm grateful for the president to give us this chance to actually get this stuff done," he said repeatedly. In the next question, he assured reporters that Trump won't fire Special Counsel Robert Mueller, despite evidence to the contrary.

Let's say for argument's sake that Ryan decided that the right thing to do was to speak his mind about Trump. What happened to other Republicans who have done so lends a word of caution. Most of Trump's high-profile GOP critics, for one reason or another, have decided to roll some of their criticism back.

Mitt Romney accused Trump during the 2016 campaign of being dishonest, "very, very not smart" on foreign policy, a greedy bully and a misogynist. Then he dined with Trump to be his secretary of state. Now, he's running for Senate in Utah and hasn't said much of a negative word about the president since. The message is clear: Even in Utah, a state whose conservative voters were no fans of Trump, Romney needs the president on his side to win.

Ryan, of course, doesn't need to win anymore - at least not this November. But he does have a legacy to worry about, and dissing Trump could boost a candidate dangerous for the Republican Party, fringe challenger Paul Nehlen, who has been banned from Twitter after comparing Meghan Markle to a prehistoric black Briton and who describes himself as "pro-White." Trump praised Nehlen in the 2016 election.

After retiring Sen. Bob Corker, R-Tenn., said Trump threatens World War III, he saw his approval numbers crater among Tennessee Republican voters. A few months later, he appeared to be somewhat back in Trump's good graces by traveling with the president when he came to Nashville.

And Sen. Jeff Flake, R-Ariz., gave up his job to be a voice against Trump, though he often votes for Trump priorities.

Attacking the president of the United States is politically and practically challenging when that person is also the leader of your party. Ryan doesn't have an immediate election to worry about anymore, but he does have plenty of reasons not to go after Trump.