Memories of the 1968 King riots, a story we would rather forget 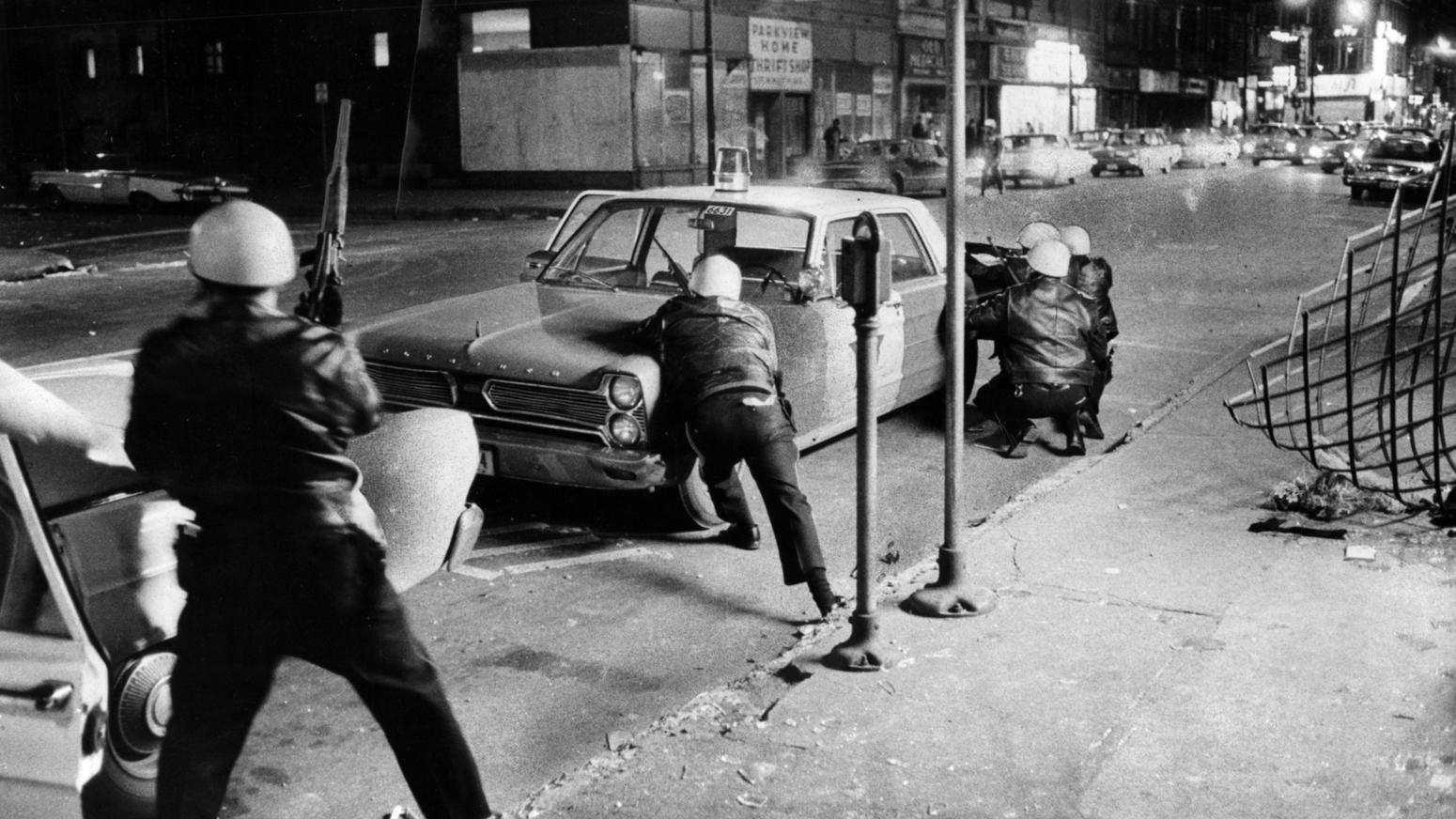 Chicago policemen holding guns crouch behind a squad car as they scan the windows in a housing project at 454 W. Division St. for signs of a sniper on April 5, 1968.

When America thinks of and 1968, it is usually about the , the yippies and the cops battling it out in the parks and Mayor shaking his angry face on national television.

But if you're from , and if you were here then, you'd think of the West Side burning after the assassination of the Rev. ., and the looting, chaos and despair that followed.

Out on the other day, I could still see cold evidence of the fires: great empty lots on many blocks, like missing teeth in a broken mouth.

Apartment buildings, stores, shops and offices had been burned to the ground. The neighborhood has never recovered.

"It's always been like this, always, all my life," , who's in his mid-50s, told me as we stood at a bus stop at Madison and , out of the cold morning rain.

"It's was always bad on account of the fires, but it's changing," Madison said. "Now they're going to put condos up and run us out of the neighborhood."

Who's going to run you out?

"Who you think?" he said, staring at the lone white guy on the corner.

"Not you personally, but you know, you can see it, they'll develop us next out of the neighborhood."

Development along Madison has crept up to , and is next. Wallace's Catfish Corner behind us was shut down. Barbershops, gas stations, mom and pop stores are gone. Across the street was more vacant space on either side of a pharmacy that hasn't been open for years.

The other day, my newspaper published "Rage, Riots and Ruin," a comprehensive and riveting account of the King riots by reporters and Ese Olumhense, with photos and video by .

The paper asked readers a question: Do you have memories from the 1968 riots?

I wonder what stories they'll tell.

Will they tell stories of street gang leaders like offering "protection" to fearful businessmen on the South Side, and of Mayor Daley's "shoot to kill" order and reports of false fire alarms and firefighters being shot at?

Will they tell of Italians on their rooftops with guns near and Damen, and Lithuanians and Poles waiting at the South Side viaducts?

Or of African-Americans hunkering down in panic and despair, with their neighborhood burning, thugs running wild in the chaos?

I've got a story. When I told it on my podcast, my mom heard it and began crying.

The day after King was assassinated, just as the riots were beginning, she was out on Madison, west of the Loop, at a lawyer's office when the lawyer cut the meeting short: You've got to go, he said.

Office workers were spilling out of the buildings, West Side blacks had begun to break windows, police sirens were screaming. And there was my mom, with her purse and white gloves, a white lady on the corner alone, not knowing what to do.

"Lady, get in the cab!" shouted a cabdriver. She was in and he was rolling before she realized he was black. He told her to lie down, then drove around barricades and the gathering mobs, and took her to , where whites were manning the viaducts to defend their neighborhoods.

Civility can snap so quickly, de-escalate into barbarism. And it can also be restored by acts of kindness, like the cabdriver putting himself at risk to take my mom into a neighborhood where he was in danger.

We don't know his name. But every year at this time, our family thanks him.

"That kind of thing happened all that week, good people in chaos, helping each other, while others tried to hurt each other and take what they could," retired police Lt. told me. "The fires were burning. It was chaos."

Capesius spent 36 years on the job. But that week in April, he was a rookie cop on the West Side, two months out of the academy.

"Whites were arming, blacks were terrified, police officers were bringing their own shotguns to work. It was that crazy," he said.

I started my day on the West Side with breakfast at the on Madison, one of the best diners in the city.

The Palace, at , has been open for 80 years. It survived the '68 riots. And I thought of pain and the smell of smoke.

"They say that the violence didn't come this far east, but it did," owner told me. "My Uncles Gus and were here six straight days without leaving, day and night, feeding the cops and the firefighters, and there were Molotov cocktails hitting the roof.

"There were good people in the neighborhood," Lemperis said. "Some still come back."

Out on the 3800 block of , where the fires had cut swaths 50 years before, I saw about 40 police officers forming up, in battle gear.

A young man in dreadlocks, who I thought was a bystander, was watching them, and I asked him what was going on.

Ballinger had a great personality, funny and confident, and I could see him as a star.

I asked if he knew what happened on the West Side 50 years ago this week.

He's so young, how could he know? How many people remember?

It's not a story tells about itself. It's a story that would rather forget.