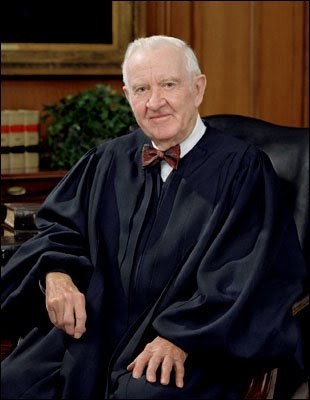 You know they're panicking when they insist they're not panicking.

It is one thing for the left to slowly, carefully, methodically gut the Bill of Rights by using the media and their children's crusade as proxies.

But it's quite another thing to honestly declare your intentions about repealing the Second Amendment, which is what Stevens — a Republican appointee but a liberal — is advocating.

At least Stevens is honest about it, which is what you'd expect of a 97-year-old Cubs fan who saw Babe Ruth's called shot at Wrigley. But he's driven Democrats crazy.

Sunlight is the best disinfectant, yes, but what if you don't want to admit to the American public — before the 2018 elections — that shredding the Second Amendment is what's on the menu?

Stevens fixed them on a pin, like insects on a board. An honest pin, to be sure, but a pin nevertheless.

So until Democrats can figure out an escape, without demeaning the retired justice, those bent on trashing the long-held American right to bear arms just might want to remember happier times.

Like those halcyon days when they hadn't yet driven all the moderate Democrats out of their party, when John Kerry was running for president.

Kerry, the impossibly rich liberal, a beneficiary of the Heinz ketchup fortune thanks to his wife, was a worldly fellow, comfortable on a yacht. But he was plagued by his patrician, upper crust demeanor.

Some political brain decided Kerry should go a goose huntin' and demonstrate his love for the Second Amendment. And he got all dressed up like Elmer Fudd.

All that was missing was the Fudd hat with the ear flaps. But that would have ruined Kerry's hair.

Somebody shot some geese — or perhaps an aide had them quietly strangled — but either way Kerry proudly carried those dead geese around for news photographers, to demonstrate his reverence for the Second Amendment and the American right to kill some geese.

The Bill of Rights doesn't exactly mention goose hunting, but liberals have a way of conflating hunting with the right to bear arms.

Kerry didn't care. He even dropped his patrician airs for the afternoon and walked around like an animatronic Orvis catalog. And, he got some nice Ohio mud on his boots.

The photo op might have worked, if Kerry hadn't been wearing obviously stiff new gear, which made him look exactly what he was: a liberal politician in store-bought huntin' clothes pandering for regular folks' votes in Ohio by carrying a shotgun and a bunch of dead geese.

Will we ever see Democrats touch a gun again in a photo op?

Perhaps, but they'll need a a safe emotional distance between any fake Second Amendment reverence and that other recent Democratic event:

That children's crusade of the left called March for Our Lives, which was treated as some kind of spontaneous happening rather than carefully orchestrated theater.

In it, the young protesters held signs, spent George Clooney's money, while demanding the government take away Americans' guns, because, in the words of student leader and apprentice demagogue David Hogg, stupid parents just can't be trusted with democracy.

"When your old-ass parent is like, â€˜I don't know how to send an iMessage,' and you're just like, â€˜Give me the (deleted) phone and let me handle it,'" said Hogg in an earlier interview. "Sadly, that's what we have to do with our government; our parents don't know how to use a (deleted) democracy, so we have to."

Of course you do. So just do it.

Stevens wrote that he was moved by the demonstrations in Washington and other major cities, adding that they reveal broad public support for legislation to minimize the risks of mass killings by those with guns.

"But the demonstrators should seek more effective and more lasting reform," wrote Stevens. "They should demand a repeal of the Second Amendment."

It would be a more honest debate if Democrats would just drop the pretense and the mealy-mouthing and the business of carrying dead ducks around and follow Stevens lead by declaring they want to repeal the Second Amendment. And have their candidates make that position clear in the upcoming midterms.

But Democrats are wriggling on that pin, saying they really don't want to mess with the Second Amendment.

"Not if they'd like to keep their jobs," said one of CNN's many leftists-in-residence, Symone Sanders, a former press secretary for socialist presidential candidate Bernie Sanders.

"This is what happens when Democrats allow folks on the right and the Republican Party to define and frame the conversation," she explained, though Justice Stevens isn't exactly of the right.

And some of those young people in March for Our Lives demanded America get rid of its guns, but Sanders said she wouldn't go that far.

In other words, use the children's crusade until you can't. And insist you really don't want to gut the Bill of Rights, until it's done.