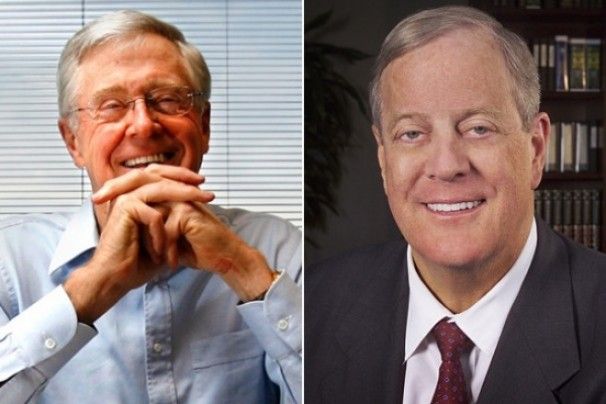 Leaders of the conservative Koch political network are mad about President Donald Trump's tariffs, the failure to protect "dreamers" and runaway government spending. They're frustrated that congressional leaders do not feel a greater sense of urgency to pass more ambitious legislation during what could be the final six months of unified Republican control for a long time. And they're worried that squabbling might derail their efforts to roll back financial regulations, expand access to experimental medicines and overhaul the criminal justice system.

For now, the network led by billionaire industrialists Charles and David Koch still plans to spend between $300 million to $400 million on politics and policy during the 2018 cycle. But they're growing impatient, rethinking their approach and signaling a willingness to work more closely with Democrats on areas of common ground.

"We're not going to sit back and wait, as we have in the past," said James Davis, a senior official at the network who oversees communications. "We've also pulled punches in a lot of places where we didn't want to upset folks that we were going to be working with on other issues. . . . So we're going to have to come out and hold Republicans and Democrats accountable. . . . If they think they're going to wait out the clock for the rest of this congressional cycle, voters would be right to ask: 'Why should I send these people back to represent me?'"

As Congress returns on today from a two-week Easter recess, watch for the constellation of groups funded by the network to ramp up pressure on the legislative branch for more action. There will be a paid media component and the mobilization of grass-roots affiliates, such as Americans for Prosperity.

"This is now a time for Republicans to call out Republicans and Democrats to call out Democrats and push them to work for the American people," Davis said in an interview on Thursday. "Otherwise they retreat into their corners and wait out the clock and they're more focused on reelection than they are doing the job . . . That's where we can play a significant role in turning up the heat. . .

"Neither party is really leading with a strong agenda to help the American people here," he added. "There's a lot of rhetoric. People pay lip service to the shared concern about government spending, corporate welfare, a solution for dreamers or, more long-term, a solution for immigration. Yet they're largely absent."

• 2017 was a red-letter year for the Kochs at the federal level, perhaps the best in the history of their 15-year-old network. After pointedly declining to support Trump during the 2016 campaign, the Koch network pragmatically embraced large swaths of the administration's agenda and avoided confronting him too forcefully.

They not only spent more than $20 million to help pass the tax bill, which brought the corporate rate down from 35 percent to 21 percent, they also successfully torpedoed the border-adjustment tax that was initially the centerpiece of how Speaker Paul Ryan planned to pay for it.

Their massive push to repeal Obamacare failed, but the individual mandate was killed as part of the tax bill.

The administration did a great deal to deconstruct the administrative state, repealing and rolling back scores of regulations put in place by Barack Obama. Justice Neil Gorsuch is going to be one of the biggest allies for business, and a booster of outside political spending, during the decades he will likely spend on the Supreme Court.

• But 2018 hasn't gotten off to a great start, especially the two months since the major donors to the network gathered outside of Palm Springs at the end of January. The Kochs tend to be more libertarian-minded, and the business community typically supports more immigration, so the network has been dismayed by the treatment of the dreamers and the new demands by the administration to reduce the levels of legal immigration into the country. They're also unnerved that a deal couldn't get done to appropriate money for a wall in exchange for protecting the 700,000 beneficiaries of the Deferred Action for Childhood Arrivals program.

"These folks are here and they want to contribute positively to our society, yet they lack certainty," said Davis. "This is a pressing issue. This is one that Congress should have already and could have already tackled. This is a crisis because they've not taken action. . . . The labor participation rate is maxed out right now, and you haven't seen it budge much, while the economy is doing really well. . . . There's a human dignity angle to this, as well."

The network opposed the $1.3 trillion package that passed last month to fund the government through September because it busted spending caps and ran up the debt. "Reckless spending has happened under both parties," said Davis. "The American people know that we can't continue this wasteful spending and the trajectory we're on. And if you ask individual members of Congress, they'll all say, 'Oh yes. Spending's a big problem.' And yet they pass a $1.3 trillion omnibus. That can't continue to happen!

"What's even more concerning is ideas that have been tremendously beneficial to our country over time, such as free trade, are now under attack," added Davis. "We want to see a more robust defense of those ideas as we move forward. . . . It's obviously clear we've seen a lot of good positives, but the reality is it's not nearly enough to change the trajectory of the country. . . . There's a consistent undermining, where Republicans and Democrats alike think they can score political points versus actually solve problems."

• Frustrated by these setbacks, Koch's top advisers are signaling an expanding willingness to work more with Democrats on areas where they agree. "We're bringing people together to solve problems where they agree, even if they differ on other issues," said Brian Hooks, the co-chairman of the Seminar Network. "We can do a lot more of this to achieve better public policy . . . People are looking for bold leadership that puts petty differences aside. We're ready to step up to that challenge."

Several Senate Democrats supported the recent Senate bill to water down parts of the Dodd-Frank bill. A Koch-backed bill to overhaul the Veterans Affairs administration by making it easier to fire employees also got bipartisan support.

One of the network's top priorities for years has been changing the criminal justice system. Mark Holden, a longtime top lawyer at Koch Industries who is now the co-chairman of the Seminar Network, worked with the Obama White House and congressional Democrats to come up with a compromise in 2016, but they could never get Republican leaders to bring it up for a vote.

"We are going to expand and build on the success of the model we've used in pursuing criminal justice reform," Holden said in an email. "We started with an outcomes-focused vision early on, working with anyone looking to achieve the same outcomes . . . And we continue to make progress in the same way - we're starting with prison reform and we'll work toward other needed reforms like sentencing."

• Bigger picture, the Koch network wants to become less reactive and more proactive. "We've played too much to the cadence of Washington and the congressional calendar and whichever leader or whichever party held the majority and their agenda," said Davis. "Then we played marginally around . . . either pushing them to success or fighting them to defeat. . . . We haven't done enough to set the agenda."