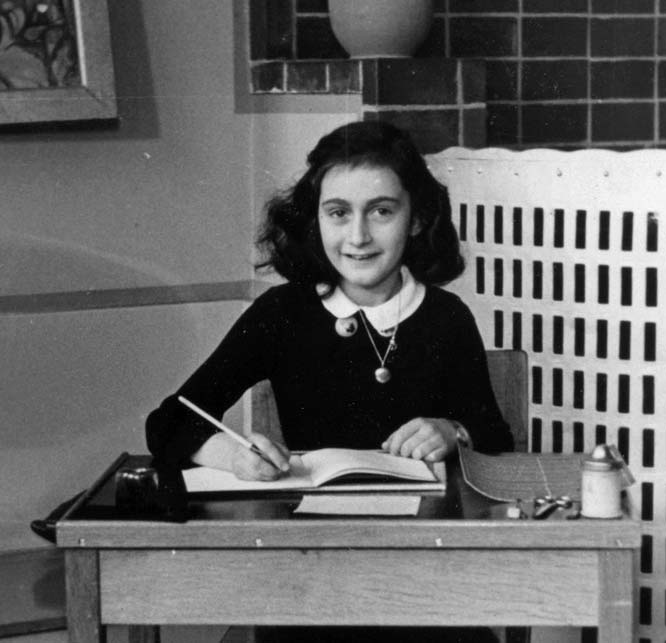 On the eve of Holocaust Remembrance Day, the New Israel Fund announced it signed a partnership agreement with Anne Frank Fonds, the foundation Anne Frank’s father, Otto Frank, established in 1963 to administer the profits from the sales of her diary.

Frank’s diary has sold more than 30 million copies in 60 languages since it was first published in 1947. Its sales and global reach make it the most famous book authored by a Jew aside from the Bible.

The New Israel Fund’s deal with the Anne Frank Foundation is a symbolic expression of the existential struggle being waged in the Jewish world today. That struggle pits the government of Israel against much of the American Jewish leadership. It pits Israel’s public against the justices of the Supreme Court. It pits IDF line soldiers and commanders against the General Staff.

The effective merger of the New Israel Fund with the Anne Frank Foundation is the latest chapter in the theft of Anne Frank’s legacy, which began in the 1950s.

In 1952, a Jewish-American journalist named Meir Levin discovered The Diary of Anne Frank in French translation. Levin recognized that her diary was the ideal vehicle for telling the story of the genocide of European Jewry to the American public.

Frank was a Westernized Jew. Her family wasn’t religious. They were cosmopolitan German Jews who decamped to Amsterdam in 1933 when the Nazis rose to power, and immediately fit right in.

But for the Nazi occupation of Holland in 1940, Anne would likely never have received any Jewish education. But when the Dutch collaborationist government implemented the Nazi race laws, and expelled all Jewish children from public schools, in 1941 her parents were compelled to enroll her in a Jewish school.

As Prof. Ruth Wisse explained in her discussion of Anne Frank in The Modern Jewish Canon, Anne’s period in the Jewish school gave her a chance to develop a familiarity with Jewish tradition and history and to develop a positive sense of her Jewish identity.

“Thus,” Wisse wrote, “by the time the family was forced into hiding, she was well armed to face the assault against her as a Jew.”

By the same token, Anne’s family’s Westernism, coupled with the fact that they were hidden by Dutch Christians, made her proud of her Dutch citizenry. Wisse noted that in one of her diary entries, Anne resolved to sacrifice her life, “like a soldier on the battlefield” for Holland.

When he read Anne Frank’s diary in 1952, Levin recognized in Anne’s split identity the millennial condition of Jews in exile. He believed that her innocent explication of that condition, as a young Jewish Dutch girl hiding from the Nazis made Anne Frank’s diary the perfect means to tell the story of the Holocaust and the story of the Jews in the Holocaust to the American public.

But Levin lost control of her story almost as soon as the English translation of The Diary of Anne Frank was published.


Guided by playwright and Stalinist Lillian Hellman, Anne’s father chose intellectuals from America’s Jewish far-left elite to adapt her diary for stage and screen. For these intellectuals, Jewish particularism and Jewish nationhood were completely unacceptable. Playwrights Albert Hackett and Frances Goodrich purged the screen and stage version of Anne’s diary of all Jewishness and transformed the Holocaust into a tale of universal persecution.

Wisse quoted Garson Kanin, who directed the play on Broadway, explaining how the dejudaization worked.

“This strikes me as an embarrassing piece of special pleading. Right down through the ages, people have suffered because of being English, French, German, Italian, Ethiopian, Mohammedan, Negro, and so on.... The fact that in this play the symbols of persecution and oppression are Jews is incidental, and Anne, in stating the argument so, reduces her magnificent stature.”

In the end, Kanin just wrote her Judaism out of the script. The offending line was edited to say, “We’re not the only people that’ve had to suffer. Sometimes one race... sometimes another.”

According to Wisse, Levin spent the rest of his life fighting against the dejudaization of Anne Frank and was literally driven mad by his losing battle.

Levin’s loss was preordained. There were too many powerful actors pushing to revise her life story and transform her from a Jewish girl murdered in the Holocaust to a symbol of universal suffering.

It wasn’t just the Hellman-led Jewish intellectuals driving the train. The Dutch government became fully engaged in denying Anne Frank her Jewishness the Nazis murdered her for.

The Dutch government embraced Anne Frank as a “Dutch heroine,” and turned the attic where she and her family hid into a national museum. As Wisse noted, one of Anne’s childhood friends wrote in the guest registration book at the Anne Frank museum, “Anne Frank didn’t want this.”

The co-option of Anne Frank’s legacy by intellectuals and political forces who pretended away her Jewishness may have been the first successful attempt to deny the antisemitic nature of the genocide of a third of the Jewish people. But it wasn’t the last one.

Ahead of Holocaust Remembrance Day, as it does every year, the IDF Education Corps distributed an instructional guide to commanders directing them how to discuss the Holocaust with their soldiers.

The Education Corps’ booklet tells commanders to tell their soldiers that the Holocaust was caused by “the deterioration of the rule of law and the decline of democracy” in Germany.

Ignoring the fact that the Nazis rose to power by winning an election, and pretending away the fact that Germany had no liberal tradition for the Nazis to subvert, the Education Corps’ manual instructs commanders to emphasize to their soldiers “the importance of democratic institutions and checks and balances that protect the democratic method.”

In other words, as far as the IDF’s Education Corps is concerned, the Holocaust was not caused by the German people’s thousand-year history of Jew-hatred and demonology. The Nazis’ weren’t elected because their antisemitism resonated with the German public. Rather, they rose to power because Germany lacked effective checks on its executive branch.

The apparent source of the Education Corps distortion of the historical record and its decision to erase antisemitism from the IDF’s discussions of the deliberate annihilation of European Jewry is the worldview of retired Supreme Court president Aharon Barak.

Barak’s worldview is largely a function of his political convictions. Barak oversaw Israel’s so-called “constitutional revolution” of the 1990s. That “revolution” transformed Israel from a parliamentary democracy into what is often referred to as a “jurisdocracy,” where judges exercise unchecked power to overturn laws and abrogate government policies.

Since the 1990s, Barak’s political convictions have become the intellectual foundation of the Left’s ideological and programmatic identity. The Nazis play a major role in Barak’s justification of that worldview.

Barak explained his convictions in an interview with Yediot Aharonot in 2015. As is his wont, he began his justification of unchecked judicial power by invoking Nazis.

“The Nazi party was also elected with a democratic majority,” he said.

And what is the source of Barak’s “internal morality”?

As far as Barak is concerned, it isn’t the Bible, which instructs the Jewish people that all men are created in God’s image that ensures the “internal morality” of Israel. It is Barak, and his fellow justices. They are the only thing preventing the Jews of Israel from becoming goose-stepping stormtroopers marching down Dizengoff Boulevard.

Importantly, there is nothing uniquely Jewish or Israeli about Barak’s judges. They could just as easily be Germans.

Barak said, “In Germany of the early 1930s, the Supreme Court didn’t have the power to abrogate laws. I believe with perfect faith, that if Germany had a powerful court and judicial oversight back then, it would have been possible to prevent Hitler.”

Barak’s position, the Education Corps’ position, the position of the leftist Jewish-American intellectuals who erased Anne Frank’s Judaism, and the New Israel Fund’s goal of creating a “New Israel” devoid – like Anne Frank’s legacy – of all Jewish character, are all based a common view. For political and ideological reasons, they all agree that Jews must assimilate into a universal world in which antisemitism plays no role and Jewish identity, history and tradition have no place.

The diary entry that Anne Frank ended by pronouncing her determination to die for Holland “like a soldier on the battlefield,” began with the following meditation.

“Who has made us Jews different from all other people? Who has allowed us to suffer up till now? It is God that has made us as we are, but it is God, too, who will raise us up again.... We can never become just Netherlanders or just English or any nation for that matter, we will always remain Jews, we must remain Jews, but we want to, too.”

Hanging in the balance in all the battles over Israel’s identity and the identity and character of the Jewish people is one question: Was she right?

Are we uniquely subjected to hatred and persecution because we are Jews? Or is our Judaism a meaningless distinction that attracts no unique animus and violence? Should we stand together to defend ourselves, and our rights as Jews, recalling that the Holocaust was caused by annihilationist hatred directed against assimilated and devout Jews alike just because they were Jewish? Or should we view the Holocaust as just another bad thing that some people did to other people?

Should we aspire to write the next chapters of our history as our forefathers authored our past, or would it be better to throw caution and history to the winds, embrace a universalist identity and depend on the internal wisdom of judges or communists or progressive American Jews to prevent us from becoming Nazis or becoming victims once again?