Comey seems blind to the truth about lying 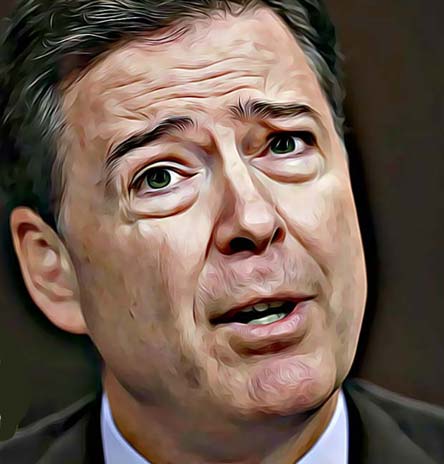 The publication of James Comey's new book has occasioned a good deal of discussion about truth and lies and integrity. Having slogged through the volume, I think the best way to understand the former FBI director's view on these matters is to consider the parts of the story that have nothing to do with President Donald Trump. Although "A Higher Loyalty" is a brisk read with much to recommend it, the central message about how and why truth matters is one that I find troubling.

There's a worrisome bit, for instance, where Comey talks about his prosecution of Martha Stewart on charges surrounding a stock trade, including making false statements to investigators:

"The Stewart experience reminded me that the justice system is an honor system. We really can't always tell when people are lying or hiding documents, so when we are able to prove it, we simply must do so as a message to everyone. People must fear the consequences of lying in the justice system or the system can't work."

Maybe Stewart deserved to go to jail, maybe she didn't. I leave that argument to others. What's interesting about this paragraph is who the "people" are. Comey is referring to you and me. He's not referring to law enforcement personnel. Police officers and federal agents alike are free to deceive us as they please to get what they want. They can lie about what evidence they have, what the forensics show, what someone else down the hall is confessing at this moment. We're just not allowed to lie back.

Lying is terribly corrosive and ought to be discouraged, but where law enforcement is concerned, I've been telling my students for decades that true respect for justice requires a symmetry. If I'm not allowed to lie to you, then you shouldn't be allowed to lie to me. If the detective who deceives me about the evidence to gain my confession is to be congratulated for good police work, then I should be congratulated for good defense work if I deceive the detective about the evidence to secure my release.

A similar issue arises later in the book, when Comey tells us that he thought then-CIA Director David Petraeus should have been "charged with a felony for lying to the Bureau." That's Comey's concern: that Petraeus, who pleaded guilty to a misdemeanor charge for mishandling classified information in 2015, lied during an interview with agents from the Federal Bureau of Investigation. If prosecutors excused Petraeus, Comey writes, "how could we justify jailing thousands of others for doing the same thing?" What does not seem to occur to him is that perhaps the jailing of thousands for lying can't be justified. Backed into a corner, it's often natural to reach for the lie. I think if we chose not to criminalize that all-too-human instinct, the Republic would survive.

And while we're on the subject of integrity and truth, we should note that Comey stumbles when he discusses longtime FBI Director J. Edgar Hoover, who by the 1950s had long ceased to be devoted to either. Yes, Comey starts well, conceding that Hoover abused his powers, and telling us, for example, that "the FBI's interaction with the civil rights movement, and Dr. King in particular, was a dark chapter in the Bureau's history." He reminds us that today's agents are taught about Hoover's wrongs. But then he adds an anecdote that does not quite do the work he intends.

When Comey ran the bureau, he kept on his desk a copy of the 1963 memorandum from Hoover to Robert F. Kennedy, then attorney general, seeking permission to conduct electronic surveillance against Martin Luther King Jr. Comey tells us that he gave the memorandum prominent place to remind himself to be cautious in agreeing to such applications from his staff. Fair enough. But this paragraph fairly leaps from the page:

"I kept the Hoover memo there not to make a critical statement about Hoover or Kennedy, but to make a statement about the value of oversight and constraint. I have no doubt that Hoover and Kennedy thought they were doing the right thing. What they lacked was meaningful testing of their assumptions. There was nothing to check them. It is painful to stare openly at ourselves, but it is the only way to change the future."

Really? The problem with Hoover was only a lack of proper checks and balances, not the man's monstrous intentions? He deserves credit because he "thought he was doing the right thing"? A few pages earlier, Comey mentions the horrific 1965 incident in which agents acting at the behest of a Hoover deputy sent King's wife a package that included compromising audio tapes of her husband and a letter suggesting that he commit suicide. That would seem to be more than enough evidence to entitle us to a presumption of Hoover's bad faith.

Comey tells us, moreover, that in "the legitimate counterintelligence mission against Communist infiltration of our government ... well-meaning people lost their way." The problem is that "Communist infiltration" wasn't a remotely legitimate mission. There's an enormous difference between investigating Soviet espionage and investigating Communism. Hoover was among the many in the 1940s and 1950s all too happy to conflate the two. The lives of a great many people (including my great-uncle) were destroyed by Hoover's refusal to draw the distinction.

I hasten to add that I'm not at all anti-FBI. The current head of the bureau, Christopher Wray, is a former student of mine, a man of brilliance and integrity, and I'm proud to have once taught him. The trouble I have with Comey's book is that he writes as though those who enforce the law are pillars of virtue, gazing unhappily upon a world of lesser creatures ready at any moment to lie about something.

There's a scene where Comey gives a tie to James Clapper, then-director of national intelligence and "the leader I admired most in government." Comey had received the tie as a gift from his brother-in-law. Thus the story's denouement: "Because we considered ourselves people of integrity, I disclosed it was a regift as I handed him the tie." In light of the excellent author's note at the beginning of the book, where Comey confesses the sin of pride, perhaps we should read this passage as the author's effort to engage in a gentle self-mockery. The more troubling conclusion -- an easy one to reach given the general tone of the narrative -- is that Comey really does see himself as part of a small circle of "people of integrity." Makes me wonder what he thinks of the rest of us.