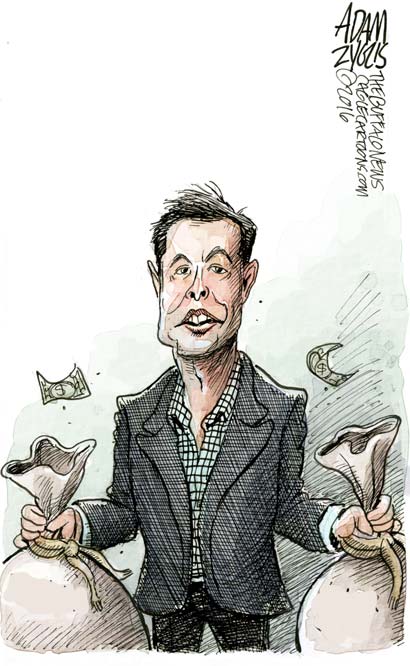 On the 28th day of June 1971, a baby was born in Pretoria, South Africa. If the last words of that sentence had been "Anytown, USA," that baby might be on his way to the presidency.

Elon Musk, a naturalized U.S. citizen since 2002, is constitutionally barred from occupying the White House because he is an American by choice rather than by birth. Perhaps we should sigh with gratitude to the Founding Fathers, because judging by the man's many interests and exploits, a Musk administration would be utterly exhausting.

So why raise this impossible scenario? Because Musk presents a useful thought experiment.

Since late 2015, when it began to dawn on me that Donald Trump was successfully disrupting the future of presidential politics, I've tried to picture what tomorrow's winning candidates might look like.

They will, like Trump, promote themselves as personal brands, independent of party affiliation. In this regard, Trump built on a foundation laid by Barack Obama, another outsider who vaulted to the presidency by declaring his independence from partisanship and tradition. While both men later found themselves in need of party support to govern, as campaigners they spurned ideology.


As Obama put it in his electrifying 2004 address to the Democratic National Convention: "There is not a liberal America and a conservative America - there is the United States of America." Riding that theme, he defeated the Democratic establishment on his way to the White House four years later, much as Trump flattened the Republican infrastructure while seizing the 2016 mantle.

It's no mere coincidence that these are the first two presidents of the iPhone era. Introduced in 2007, the pocket supercomputer (and its competitors) placed the power of mass communication literally in the hands of millions of ordinary Americans, and the business of winning votes would never be the same. As different as Trump and Obama are, both candidates appreciated that the road to the presidency is now a communications autobahn, bypassing the antiquated Main Streets of the run-down political parties.

But if Trump outdoes Obama in his mastery of social media to control the public agenda, he lacks his predecessor's sense of an important fact about the new media. To borrow terms from the pioneering theorist Marshall McLuhan, communication tools in the smartphone age are "cool" rather than "hot." New media aren't intended to grab and hold our entire attention, as the ratings- obsessed Trump wishes to do. Winning candidates of the future are unlikely to be so needy, so obvious, so nakedly relentless in their efforts to command our national bandwidth. They will be, in a word, cooler.

Few public figures have mastered cool like Musk, who describes himself as "half Democrat, half Republican" - exactly what a future president should say. "I'm somewhere in the middle," he explains.

With more than 21 million Twitter followers, Musk has sufficient reach to shape and control his public image much as Trump shapes his own. But Musk's message, his brand, is all about hope and the future. Musk promotes sleek electric cars, solar-powered cities, superfast mass transit and grand fantasies of human settlements on Mars.

Optimism has always been the better long-range bet in America, a fact measurable in the relative fortunes of Musk and Trump, perhaps. Even as the overinflated stock price of Musk's Tesla Inc. has begun leaking hot air and drifting down from the ionosphere, he continues to be worth about $19 billion.

Both men are ballyhoo artists of the highest degree. They understand that if you want to move a huge crowd, you need to paint a big picture. Anyone who has followed Trump over the past 40 years knows that his projects, from luxury condos to bottled water, are never less than the Biggest, Best and Beautiful-est.

Yet Musk is even more audacious, while employing a lighter touch. The only water he aims to bottle is in the ice caps of the Red Planet. He has cities and states across the country competing for his blessing, not to brand a golf course or skyscraper but to build the mind- boggling Hyperloop, a subway running at about the speed of sound.

But at the same time, Musk generates a giggle by naming his Hyperloop construction firm "The Boring Company" - because job one is boring tunnels. He promoted a rocket test by launching a convertible into deep space. He parried a recent thrust of bad news at his car company by tweeting April Fools' Day messages picturing himself penniless.

President Trump 2.0, and versions beyond, will take the Trumpian tools of hype, novelty and shock that are so compelling on social media and deploy them with less frenzy, heat and bluster. They'll resemble Elon Musk - with the proper birth certificate.