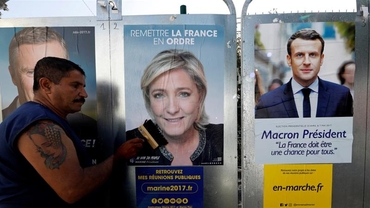 The French and EU establishments, the stock markets and the currency exchanges were rather too quick to advertise their glee. Within nano-seconds of the first projections yesterday evening, the euro rose and so did the Union's princelings, from the absurb President Junkers down, to congratulate their very good friend M Macron on his triumph in the first round of the Presidential election.

At one time it was unthinkable that Marine Le Pen could actually win the first round. Then it became thinkable, which by definition made the prospect of Madame la Presidente sitting in the ElysĂ©e Palace no longer quite so unthinkable. So the point of the first round was to find the person most likely to be effective in the Anyone But Marine Le Pen role.

That ruled out M Hollande. The incumbent was so toxic he didn't even bother offering himself for re-election - and thus, under a constitution designed expressly for strong enduring presidencies, his became the second failed presidency in a row. As for his party, that too was so toxic that its official candidate was never seriously competitive.

That left the respectable conservative and the Communist. Either would have made it difficult to do as the establishment did when Chirac faced Marine's dad in 2002, and the French people were implored to unite against the fascist. This time, had the right-wing guy snuck through into the final, much of the French left would have found Mme Le Pen's economic protectionism more appealing - and had the left-wing guy snuck through, much of the French right would have opted for Mme Le Pen's anti-immigrant nationalism.

So what was needed was a "centrist", a man who defied labels - or better yet embraced his lack of label as the ultimate label. Enter Emmanuel Macron, the "centrist" "independent" whose slogan was that he was a candidate of "neither left nor right". Fifteen years ago, analyzing the 2002 presidential first round in Canada's National Post, I wrote:

Terms like "left" and "right" are irrelevant in French politics. In an advanced technocratic state, where almost any issue worth talking about has been ruled beyond the scope of partisan politics, you might as well throw away the compass. The presidential election was meant to be a contest between the supposedly conservative Chirac and his supposedly socialist Prime Minister, Lionel Jospin. In practice, this boils down to a candidate who's left of right of left of centre, and a candidate who's right of left of right of left of centre. Chirac and Jospin ran on identical platforms -- they're both in favour of high taxes, high unemployment and high crime. So, with no significant policy differences between them, the two candidates were relying on their personal appeal, which, given that one's a fraud and the other's a dullard, was asking rather too much of French voters. Faced with a choice between Eurodee and Eurodum, you can't blame electors for choosing to make it a real race by voting for the one guy running on an openly stated, clearly defined manifesto.

This time around the French establishment were sufficiently terrified of Le Pen's daughter to take no chances. So they created their own artful Chispac-Jorin hybrid, a self-contained Eurodeedum, a both-of-the-neither-of-the-above pantomime horse comprised of two rear ends.

Thus the cypher Macron, whose come-from-between success had the EU's "vice-president" Alexander Lambsdorff hailing him as "France's John F Kennedy": The torch has been passed to a new generation, albeit one married to its mother's generation. Aside from that endearingly human wrinkle, M Macron is a triumph of precision shape-shifting hologram technology. He leads a movement with a name impossible to parody: "En marche!" - or Forward! Onward! Whether off the cliff or deeper into the swamp are mere details of progress to be charted later. Allons-y! The ringing declaration of motion is more than sufficient substitute for it!

It would be nice to think that the eagerness of everyone from Herr Lambsdorff to George Osborne to tip the scale in M Macron's favor might prove so obviously insulting to the unwashed masses that they would reject it as an abomination to democracy. But, if the polls are right (and they were yesterday) Macron is a shoo-in for victory over Le Pen a fortnight down the road.


If that's so, what will determine his fate will be June's parliamentary elections. France's Fifth Republic is designed to be governed by a president and a national assembly of the same party, and, given that Macron's entire raison d'ĂŞtre is that he is a man of no party, it will be interesting to see how he turns "En marche" from a slogan into an army of candidates. It's not easy to pull off being an emperor with no clothes but genuine coat-tails

And, even if he does it, what matters (as I said to Brian Kilmeade on TV this morning) is the trend. So two facts and a prediction:

Fact One: For the first time in the history of the Fifth Republic, neither of the main parties made it into the final round.

Fact Two: Marine Le Pen's party is now the dominant force throughout eastern France - and, indeed, wherever economic sclerosis is understood to be permanent (which territory is likely to increase over the next five years).

Prediction: Even if the polls are right and M Macron is on course to win by 20 points, that would still mean Mme Le Pen had doubled her father's share of the vote from 15 years ago.

The Fifth Republic is in a grim state. Dodging a bullet doesn't make much of a difference if you're riddled with disease.

Here's that interview with Brian on "Fox & Friends":