Kagan tells Gorsuch that it all starts in the kitchen 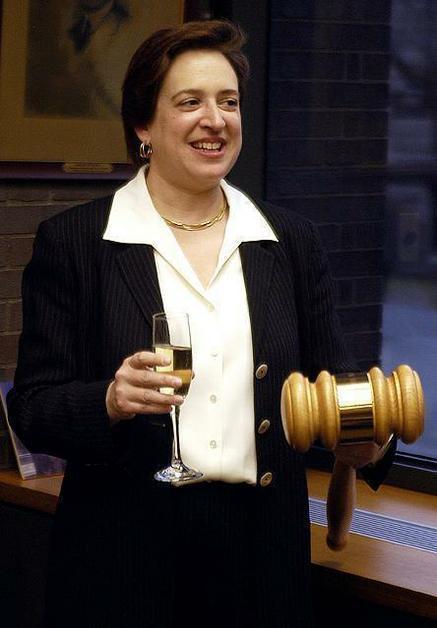 No one could have known it at the time, but at the end of last summer, Justice Elena Kagan gave Neil Gorsuch a face-to-face tutorial on what it means to be the Supreme Court's newest justice.

It starts in the kitchen.

Gorsuch and Tymkovich both were on President Donald Trump's list of potential Supreme Court nominees at the time, and it just so happened that they asked what it was like to be the most junior justice.

Kagan is a storyteller, and knows this is a topic that audiences usually eat up, so she played it for all it was worth.

The junior justice has three unique responsibilities, she said. But in recounting them, she always starts with the fact that the newest justice is assigned to cafeteria duty and keeps it until the next justice is confirmed.

"I think this is a way to kind of humble people," she said during the "fireside chat" at the elegant Broadmoor resort in Colorado Springs, Colorado. "You think you're kind of hot stuff. You're an important person. You've just been confirmed to the United States Supreme Court.

"And now you are going to monthly cafeteria committee meetings where literally the agenda is what happened to the good recipe for the chocolate chip cookies."

The justices eat lunch together on the days when they hear oral arguments, Kagan explained.

"Somebody will say, 'Who's our representative to the cafeteria committee again?' Like they don't know, right? And then they'll say, 'This soup is very salty.' And I'm like supposed to go fix it myself?"

You might guess it was not the first time Kagan has told the story. But, as she says, she's worried about the cookies and the soup since 2010--her biggest contribution has been to install a frozen yogurt machine--so who would begrudge her?

The Supreme Court is a place that runs on seniority. When Justice Ruth Bader Ginsburg gets questions from feminists about why the opera written about her relationship with the late Justice Antonin Scalia is called Scalia/Ginsburg--and not the other way around--she tells them to remain calm.

Scalia got to the Supreme Court before she did, she says. He gets top billing.

The junior justice's other responsibilities involve the private conference, when the justices meet alone--no clerks, no assistants--to decide which cases they will take and vote on the cases in which they've heard oral arguments.

Kagan likes that duty. "I pay attention, I don't lose focus and I communicate all our decisions," she said. But that's not all.

"The third thing -- this is the most important junior justice responsibility -- I open the door," she said.

The conference room is a "real inner sanctum. We have two doors," she said. Why would someone knock? "Well, you know, one of the justices forgot his glasses. The other justice forgot her cup of coffee."

Kagan said there are no exceptions to the rule of who answers the door.

"Literally, if I'm like in the middle of a sentence--let's say it's my turn to speak or something -- and there's a knock on the door, everybody will just stare at me, waiting for me to open the door," Kagan said. "It's like a form of hazing. So, that's what I do, I open the door. Pronto."

Kagan said all this good-naturedly; she is always one to appreciate the great gig she's landed rather than expound on the weight of the job.

Kagan is known as one of the court's best writers, with a style that is clever, conversational, even a little sassy at times. She and Gorsuch, also known for his legal prose, formed a bit of a mutual admiration society.

"Justice, you're such a very fine writer," Gorsuch enthused.

"Thank you!" Kagan responded. "And coming from you, I mean that's a great compliment."

"What would you attribute your success as a writer to?" Gorsuch asked.

Kagan answered that it began with her schoolteacher mother, who "basically approached the fifth grade curriculum as if it were a PhD dissertation. She brought that attitude home with her . . . I really do feel like she taught me to write."

Gorsuch asked if she went back and reread her opinions.

Then she turned the tables: "Are you always critical of yourself?"

"But everybody loves it!" Kagan said.

After Monday, the Supreme Court's two youngest justices--Kagan turns 57 this month, Gorsuch is just 49 -- will take their places at opposite ends of the court's mahogany bench--and its ideological spectrum. Fittingly, spectators will see Kagan on the left, and Gorsuch on the right.

But it will be that way only until the next justice comes along. The justices' seats at the bench, like everything else, are dictated by seniority.