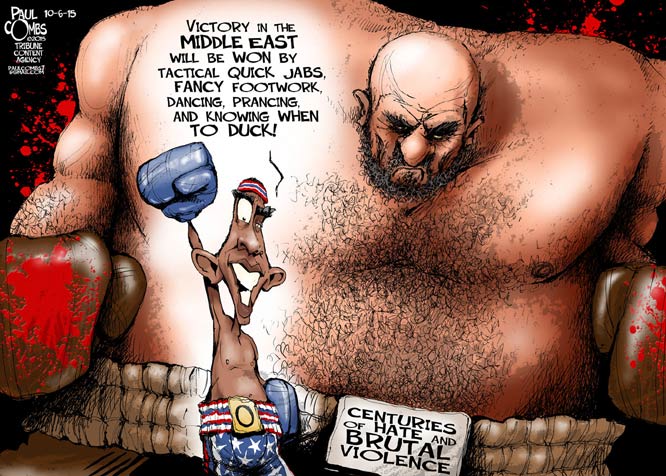 President Obama talked tough and acted meekly, and his policies were therefore a factor in thousands of people losing their lives, the Syrian refugee crisis, Middle East mayhem generally and U.S. leadership taking a dive worldwide, say such analysts as Robert Kagan of Brookings Institution.

Here comes President Donald Trump. He sees a horror on TV and acts decisively, and this much we can be sure of: Syrian dictator Bashar Assad will never again use internationally forbidden chemical weapons on civilians.

There are complications beyond that issue, but it's nothing to sneer at and other positives could flow from 59 U.S. Tomahawk missiles striking a Syrian airfield. It was home to the airplanes dropping nerve agents that caused the death and suffering of children. Seeing videos of the atrocities, Trump consulted with a top-notch team and made this cautionary statement heard round the world.

On the issue of the nerve gas, Obama once behaved boldly, too, but in words only. His lassitude otherwise said go ahead and do what you want. In 2012, Obama said use of these chemicals by Assad or anyone else in the region would most certainly result in "enormous consequences." Don't cross that "red line," he warned. But Assad did just that a year later, killing 1,500 civilians - 426 children among them.

The "enormous consequence" turned out to be eliciting a faux promise from Syria and Russia that they would work together to destroy the chemicals. Instead, it has been noted, Russia intervened more on behalf of Assad as the WMD sat pretty. Under the umbrella of Obama naivete, a more assertive Iran signed up big time with Assad. China got more aggressive, Russia messed with Ukraine and allies wondered where we were.

Think about Obama for a moment, how he came to the White House talking about ending our wars and instead was engaged in war longer than any other president ever. His exit strategies lacked the option of victory, and destabilization became a specialty. He extended our fighting presence geographically and spent $866 billion on military action compared to $811 billion by President George W. Bush, according to Atlantic magazine.

Now we come to Trump, an isolationist in his campaign except for pledging more military strength and extermination of radical Islamic terrorism.

Note as faults in this Syria strike that no broad strategy is apparent and he acted unconstitutionally in failing to ask Congress for permission. It's still clear that he will never let Assad get away with ignoring one of the relatively few restrictions on war, but what about the dictator's continuing use of massacre-style barrel bombs?

Will Trump sit by while this continues to transpire, or will he maybe wipe out Assad's air force?

That could be accomplished minus an all-out military effort to oust Assad, which could be a protracted calamity with no assurance of anything good at the end. What does make sense is pragmatic calculation seen in the Middle East coalition Trump is building with Egypt, Jordan, Saudi Arabia and the United Arab Emirates in addition to Israel.

And an intermediate value of the retaliatory strike in Syria is others just maybe paying more attention to us, North Korea, for instance, and don't forget Iran.

The Obama Iran deal was the Syria deal all over again. Clearly eager to build nuclear weapons, Iran had been kept from that venture by 20 years of threats from U.S. presidents. Leaders there then said they would hold off for another decade if we agreed to return billions of dollars plus other treats. As with Syria, there are multiple means by which Iran could evade detection in its transgressions, and reinstituting international sanctions could be nearly impossible until too late.

Obama visited us with heightened peril and Trump has taken one small step in a better direction. Iran, North Korea and Russia are indulging in bellicose barking, but at least Obama is no longer empowered to make things worse.