Why New York is pivotal for Clinton and Sanders 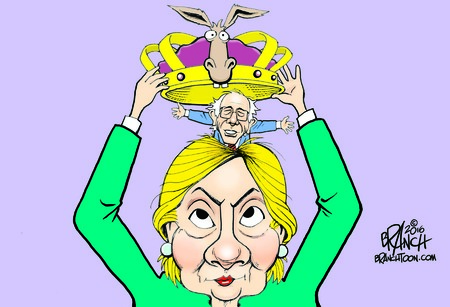 NEW YORK --- The Democratic presidential nominating contest has become a discussion about momentum, not mathematics, and that's become a major problem for front-runner Hillary Clinton in her battle against Sen. Bernie Sanders.

Clinton has won more states, more popular votes and more pledged delegates, but Sanders has had the momentum. He has won seven of the past eight contests, including last week's Wisconsin primary and Saturday's Wyoming caucuses. But after stumbles by the Vermont senator over the past half-dozen days, New York's April 19 primary and the series of contests that follow on April 26 provide Clinton the opportunity to change the conversation. For both practical and psychological reasons, she badly needs to do so.

The U.S. senator from Vermont has been running a remarkable campaign politically, having generated support and enthusiasm far beyond what anyone anticipated. Even more astonishing is the fact that he continues to raise money faster and more easily than Clinton. The Sanders grass-roots, online money machine guarantees that he will have the resources - and the passion behind his candidacy - to contest every primary and caucus between now and June 7.

In recent weeks, thanks to huge victories in caucuses, he has chopped Clinton's lead in pledged delegates substantially. That has given rise to his talk of potentially moving ahead of Clinton in pledged delegates, of a related battle to convert Democratic super delegates -- elected officials and party leaders who have automatic seats at the convention and are free to support whomever they choose -- to his column, even to suggestions of an open convention in Philadelphia.

The cold realities of the nominating process have been stated many times. Democratic rules make it difficult for anyone to gain a significant lead in pledged delegates because delegates are awarded proportionally. But once someone has a lead, a rival candidate faces an even more daunting task trying to catch up. That's the situation Sanders has faced for some time, but his big victories in recent caucuses and the Wisconsin vote have kept the focus on his successes more than on his challenges.

Clinton's team had hoped that the hard realities of delegate math would have set in earlier this spring. Instead, the opposite has occurred. The more Sanders has won, the more the focus has been on what's wrong with Clinton. She has had to keep virtually her entire focus on the primary campaign. At some point, however, as the likely nominee, she will need to turn her attention -- and some of the resources of her campaign -- to assembling the building blocks for a likely general election campaign. That clock is now ticking louder.

The Clinton team thinks that by the end of the month, the numbers will be incontrovertible, that she will be seen as the presumptive nominee. Senior campaign advisers who have run the numbers argue that by month's end, Clinton will have accumulated roughly 90 percent of the delegates needed to clinch the nomination. "There won't be a path for Bernie to succeed," said one of those advisers, who spoke on the condition of anonymity to share internal information.

That won't end the competition with Sanders. The calendar looks better for him in May than in late April. He is most likely to win contests that month, giving rise to more questions about Clinton. This is not uncommon in nomination battles. President Barack Obama, in his 2008 campaign against Clinton, lost more contests than he won between early March and the end of the primary season. But his delegate lead barely wavered. By the time we get to California in June, Clinton could be in a position to claim the nomination while still losing the state to Sanders by a wide margin.

The Clinton campaign's projections of her trajectory are based on a combination of pledged and super delegates. The current Associated Press count gives her 1,280 pledged delegates and 469 super delegates for a total of 1,749. AP says Sanders has 1,061, including 38 super delegates.

The Sanders camp pegs his total slightly higher. Beyond that, his advisers say that neither candidate can achieve the 2,383 delegates needed for nomination on the basis of pledged delegates alone, and they say that would leave the issue of who becomes the nominee in the hands of the super delegates. Still, Clinton is likely to have a majority of those pledged delegates, on the basis of current projections.

Clinton's strength among super delegates appears to be understated by public counts. Campaign officials have told their allies in the party that their actual super-delegate count is at least 100 more than the AP count and closing in on 600 overall. Nor are those tasked with keeping an eye on those super delegates seeing any defections, according to several party officials.

The campaign's internal numbers are higher than the public numbers for two reasons. First, there are super delegates who have privately committed who haven't yet been identified. Beyond that, there are more who have made private commitments to the Clinton campaign but don't want to say so publicly for the time being, with some likely to wait until the primaries have ended.

Clinton knows Sanders will run to the end of the primaries; she did the same against Obama in 2008 when she was the underdog and trying to close the gap. But general election planning also looms. Working backward from Election Day, the time is fast approaching when any smart campaign must start to set up organizations in the battleground states and prepare in other ways as well.

That is unglamorous but necessary work - picking state directors who in turn will build out their paid staffs and link up to a bigger network of volunteers. In some states, early voting will begin a month out from the election, which means that by early September, a campaign focused on winning in the fall must have its teams up and running at full speed - to identify its voters and get them to the polls.

That work needs to start sometime within the next month, if history is any guide. It can be done in a shorter time, but there are risks. The fractured Republican nominating contest could give Clinton some cushion, but in practice, the prospect of a contested GOP convention gives Democrats an opportunity to take aim at the Republicans before they are truly ready to fight back.

That is why New York is so important to Clinton. It's not just winning, it's changing the conversation. A loss to Sanders in the state she represented in the Senate for eight years would be a huge setback, far bigger than what happened in Wisconsin. Victory could start her on a path that could make the Democratic race look far different in a matter of weeks.