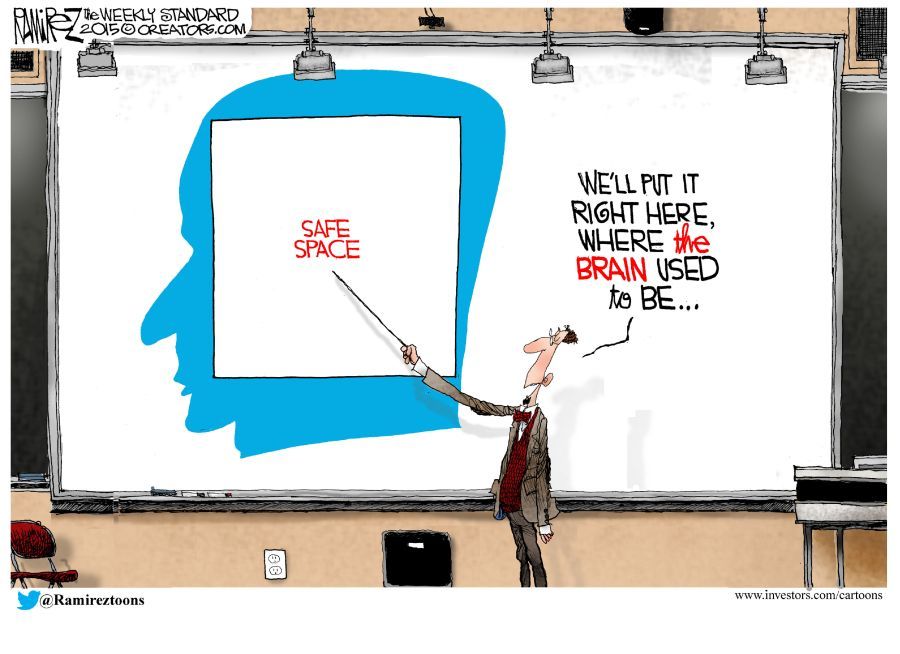 What's happening on campus when students demand "safe spaces" where they won't be confronted with troubling ideas? Many people debating that talk about it in terms of restricting freedom of speech. But in a thoughtful lecture recently, Jacob Levy suggests that what's really at stake is freedom of association -- the way that we come together to build communities of purpose.

If a professor gets up and rants at his mathematics class about Donald Trump for five hours every week, and gets fired, we would not say that the university had violated his free speech rights or his academic freedom. Why not? Indisputably, he has a legal right to say these things. Under most codes of academic freedom, he even has the right to say these things and maintain his employment. But he can be fired because a university is an association with a purpose -- extending human knowledge and passing that knowledge down to the students. And this math professor acted against that purpose.

"You can't rant about politics instead of teaching math" is not the only way that the university community restricts speech. Levy points out that there's also a limit on when and where we contest ideas between different sub-communities within the university. Physicists can make fun of social scientists for not doing "real science," and the economists and the sociologists can call each other names, and philosophers can point out that everyone's assumptions about reality are really pretty shaky, but at the end of the day, each of these faculties retreats to their offices to do their work. It's not that these challenges aren't valuable; they are, in fact, one of the great benefits of a multi-disciplinary university. But if they all had to continually justify their methods and assumptions to each other, no one would ever get any other work done. So universities create "safe spaces" (aka academic departments) where people can sit down and deploy their discipline's methods without having to start each time with a defense of their work from first principles.

So, asks Levy, if we don't mind "safe spaces" in departments, why do we freak out when students try to create other sorts of safe spaces? He looks at the example of a controversy at Yale a few months back. It's a good question -- but I think that looking more closely at that controversy shows why Levy's model doesn't really work in that case.

An official associated with one residential college sent an e-mail to residents that criticized a Yale administration e-mail about offensive Halloween costumes. Is that really the same thing as following you into your dorm room and insisting that you spend nine hours debating affirmative action, or popping up at the meeting of the College Democrats to demand that they denounce socialism? The important part of the former two is that they're nearly impossible to get away from. They're disrupting the ability of other people to sit there and think about what they want to think about, rather than what the speaker wants.

Written communication just doesn't have this characteristic. I participate in social media, and every so often, I get a storm of angry people who inundate me with terrible messages about how I'm a fascist or a communist or I want to kill puppies or whatever the outrage of the week is. It can be terrible and draining. But over years on the Internet, I have learned a very important thing about these communications: I can shut them off, and continue to have a normal day. It requires a small act of will to ignore angry people who are shouting at you, but as acts of will go, it's really not all that heroic - and I submit that in an age of ubiquitous social media, that's a form of willpower we're all going to have to learn.

At the heart of the Yale controversy is something that I think we'll need to grapple with more broadly: how there can be safe spaces for reflection and work in an era of mass broadcast communication. One thing Levy might fairly say in response to the above is that your e-mail inbox and Facebook feed do not really feel the same as someone publishing an op-ed in some distant paper. I can't just decide not to check my e-mail, and many people would say the same thing about Facebook or Twitter; these are not hobbies, but vital threads that connect us to our work and our families and other important parts of our lives. And that's fair enough.

One norm that I'd certainly like to see established is that you shouldn't inundate people with nastygrams which make it impossible to use their e-mail or social media. That's happened to me, and it happened to the Yale student, and I'm very sorry for her, because it's horrible. That's pretty close to the kind of really annoying and unproductive verbal confrontation that Levy describes, and it ought to be verboten.

Sadly, I don't see any likely means of establishing such norms with the people who most need to be bound by them, but boy, I wish we could.

There is, however, a norm I think we can establish, and will probably have to: that written communications which are not hostile, or so numerous as to overflow your inbox and social media feeds, are not an intrusion. They may bother you, but guess what, many things in this world will, so you're going to have to learn to disengage from them when you need to. In a world where electrons flow everywhere, you cannot rely on other people to police the boundaries of your safe spaces. That's going to have to be your responsibility, because the whole world cannot be made a safe space for you.

And if I may step back one more level, having followed many of the incidents that Levy discusses, I really don't think that the campus left is simply interested in creating neutral zones where students can recharge before going out to once again do battle in the classical liberal marketplace of ideas. There are at least elements of it that want to make the world a safe space for their ideas, one where opposing ideas are shunned and silenced.

We can argue about the size and power of this movement, and whether it gets exaggerated by the media spotlight. (Probably.) But even if it's much less powerful than the most notorious incidents would suggest, we do need to take it seriously, for the same reason that we need to take Donald Trump seriously even though he probably won't be president and most of his rallies don't feature protesters getting punched.

The classical liberal order is being attacked from both sides more vehemently than it has been in generations. And if you think, as I do, that the classical liberal ideals of free speech and agreeing to disagree are the only order that can possibly work in a society as pluralistic as ours, then while we need to have compassion for its discontents, we also need to be prepared to mount a strenuous defense.