Is the modern American university a failed state? 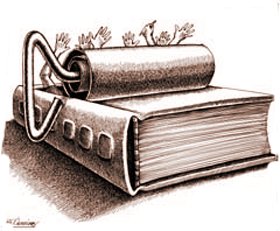 First, their general education core taught students how to reason inductively and imparted an aesthetic sense through acquiring knowledge of , the Battle of Gettysburg, "Medea" and "King Lear," 's "Ode to Joy," and astronomy and Euclidean geometry.

Third, four years of college trained students for productive careers. Implicit was the university's assurance that its degree was a wise career investment.

Finally, universities were not monopolistic price gougers. They sought affordability to allow access to a broad middle class that had neither federal subsidies nor lots of money.

The American undergraduate university is now failing on all four counts.

A bachelor's degree is no longer proof that any graduate can read critically or write effectively. National college entrance test scores have generally declined the last few years, and grading standards have as well.

Too often, universities emulate greenhouses where fragile adults are coddled as if they were hothouse orchids. Hypersensitive students are warned about "micro-aggressions" that in the real world would be imperceptible.

Apprehensive professors are sometimes supposed to offer "trigger warnings" that assume students are delicate Victorians who cannot handle landmark authors such as or Mark Twain.

"Safe spaces" are designated areas where traumatized students can be shielded from supposedly hurtful or unwelcome language that should not exist in a just and fair world.

One might have concluded from all this doting that 21st-century American youth culture -- rap lyrics, rough language, spring break indulgences, sexual promiscuity, epidemic drug usage -- is not savage. Hip culture seems to assume that its 18-year old participants are jaded sophisticated adults. Yet the university treats them as if they are preteens in need of vicarious chaperones.

Universities entice potential students with all sorts of easy loan packages, hip orientations, and perks like high-tech recreation centers and upscale dorms. On the backside of graduation, such bait-and-switch attention vanishes when it is time to help departing students find jobs.

College often turns into a six-year experience. The unemployment rate of college graduates is at near-record levels. Universities have either failed to convinced employers that English or history majors make ideal job candidates, or they have failed to ensure that such bedrock majors can, in fact, speak, write and reason well.

The collective debt of college students and graduates is more than . Such loans result from astronomical tuition costs that for decades have spiked more rapidly than the rate of inflation.

Today's campuses have a higher administrator-to-student ratio than ever before. Those who actually teach are now a minority of university employees. Various expensive "centers" address student problems that once were considered either private matters or well beyond the limited resources of the campus.

Is it too late for solutions?

For many youths, vocational school is preferable to college. Americans need to appreciate that training to become a master auto mechanic, paramedic or skilled electrician is as valuable to society as a cultural anthropology or feminist studies curriculum.

There are far too many special studies courses and trendy majors -- and far too few liberal arts surveys of literature, history, art, music, math and science that for centuries were the sole hallowed methods of instilling knowledge.

Administrators should decide whether they see students as mature, independent adults who handle life's vicissitudes with courage and without need for restrictions on free expression. Or should students remain perennial weepy adolescents, requiring constant sheltering, solicitousness and self-esteem building?

Diversity might be better redefined in its most ancient and idealistic sense as differences in opinion and thought rather than just variety in appearance, race, gender or religion.

The now-predictable ideology of college graduation speakers should instead be a mystery. Students should not be able to guess the politics of their college president. Ideally, they might encounter as many Christians as atheists, as many reactionaries as socialists, or as many tea partyers as protestors, reflecting the normal divisions of society at large.

Colleges need to publicize the employment rates of recent graduates and the percentage of students who complete their degrees so that strapped parents can do cost-benefit analyses like they do with any other major cash investment.

A national standardized exit test should be required of all graduates. If colleges predicate admissions in part on performance on the SAT or ACT, they certainly should be assessed on how well -- or not so well -- students score on similar tests after years of expensive study.

Finally, the federal government should hold universities fiscally accountable. The availability of federal grants should be pegged to a college's ability to hold annual tuition increases to the rate of inflation.

At this late date, only classically liberal solutions can address what have become illiberal problems.