The diplomatic track to war 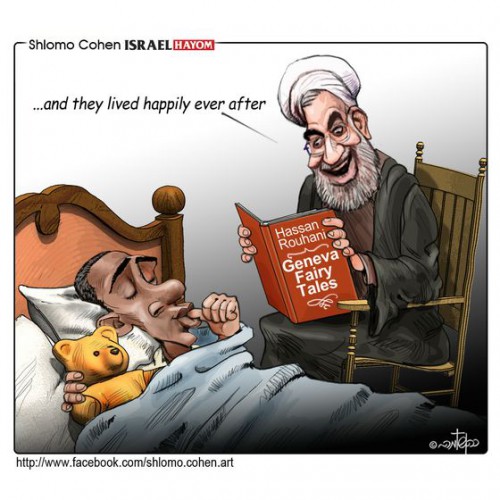 The world powers assembled at Lausanne, Switzerland, with the representatives of the Islamic Republic may or may not reach a framework deal regarding Iran’s nuclear program. But succeed or fail, the disaster that their negotiations have unleashed is already unfolding. The damage they have caused is irreversible.

US President Barack Obama, his advisers and media cheerleaders have long presented his nuclear diplomacy with the Iran as the only way to avoid war. Obama and his supporters have castigated as warmongers those who oppose his policy of nuclear appeasement with the world’s most prolific state sponsor of terrorism.

But the opposite is the case. Had their view carried the day, war could have been averted.

Through their nuclear diplomacy, Obama and his comrades started the countdown to war.

In recent weeks we have watched the collapse of the allied powers’ negotiating positions.

They have conceded every position that might have placed a significant obstacle in Iran’s path to developing a nuclear arsenal.

They accepted Iran’s refusal to come clean on the military dimensions of its past nuclear work and so ensured that to the extent UN nuclear inspectors are able to access Iran’s nuclear installations, those inspections will not provide anything approaching a full picture of its nuclear status. By the same token, they bowed before Iran’s demand that inspectors be barred from all installations Iran defines as “military” and so enabled the ayatollahs to prevent the world from knowing anything worth knowing about its nuclear activities.

On the basis of Iran’s agreement to ship its stockpile of enriched uranium to Russia, the US accepted Iran’s demand that it be allowed to maintain and operate more than 6,000 centrifuges.

But when on Monday Iran went back on its word and refused to ship its uranium to Russia, the US didn’t respond by saying Iran couldn’t keep spinning 6,000 centrifuges. The US made excuses for Iran.

The US delegation willingly acceded to Iran’s demand that it be allowed to continue operating its fortified, underground enrichment facility at Fordow. In so doing, the US minimized the effectiveness of a future limited air campaign aimed at significantly reducing Iran’s nuclear capabilities.

With this broad range of great power concessions already in its pocket, the question of whether or not a deal is reached has become a secondary concern. The US and its negotiating partners have agreed to a set of understanding with the Iranians. Whether these understandings become a formal agreement or not is irrelevant because the understandings are already being implemented.

True, the US has not yet agreed to Iran’s demand for an immediate revocation of the economic sanctions now standing against it. But the notion that sanctions alone can pressure Iran into making nuclear concessions has been destroyed by Obama’s nuclear diplomacy in which the major concessions have all been made by the US.

No sanctions legislation that Congress may pass in the coming months will be able to force a change in Iran’s behavior if they are not accompanied by other coercive measures undertaken by the executive branch.

There is nothing new in this reality. For a regime with no qualms about repressing its society, economic sanctions are not an insurmountable challenge. But it is possible that if sanctions were implemented as part of a comprehensive plan to use limited coercive means to block Iran’s nuclear advance, they could have effectively blocked Iran’s progress to nuclear capabilities while preventing war. Such a comprehensive strategy could have included a proxy campaign to destabilize the regime by supporting regime opponents in their quest to overthrow the mullahs. It could have involved air strikes or sabotage of nuclear installations and strategic regime facilities like Revolutionary Guards command and control bases and ballistic missile storage facilities. It could have involved diplomatic isolation of Iran.

Moreover, if sanctions were combined with a stringent policy of blocking Iran’s regional expansion by supporting Iraqi sovereignty, supporting the now deposed government of Yemen and making a concerted effort to weaken Hezbollah and overthrow the Iranian-backed regime in Syria, then the US would have developed a strong deterrent position that would likely have convinced Iran that its interest was best served by curbing its imperialist enthusiasm and setting aside its nuclear ambitions.

In other words, a combination of these steps could have prevented war and prevented a nuclear Iran. But today, the US-led capitulation to Iran has pulled the rug out from any such comprehensive strategy. The administration has no credibility. No one trusts Obama to follow through on his declared commitment to prevent Iran from becoming a nuclear power.

No one trusts Washington when Obama claims that he is committed to the security of Israel and the US’s Sunni allies in the region.

And so we are now facing the unfolding disaster that Obama has wrought. The disaster is that deal or no deal, the US has just given the Iranians a green light to behave as if they have already built their nuclear umbrella. And they are in fact behaving in this manner.

They may not have a functional arsenal, but they act as though they do, and rightly so, because the US and its partners have just removed all significant obstacles from their path to nuclear capabilities. The Iranians know it. Their proxies know it. Their enemies know it.

As a consequence, all the regional implications of a nuclear armed Iran are already being played out. The surrounding Arab states led by Saudi Arabia are pursuing nuclear weapons. The path to a Middle East where every major and some minor actors have nuclear arsenals is before us.

Israel, Jordan, Egypt, Saudi Arabia, Sudan and Eritrea, and their global trading partners will be faced with the fact that their primary maritime shipping route to Asia is controlled by Iran.

With its regional aggression now enjoying the indirect support of its nuclear negotiating partners led by the US, Iran has little to fear from the pan-Arab attempt to dislodge the Houthis from Aden and the Bab al-Mandab. If the Arabs succeed, Iran can regroup and launch a new offensive knowing it will face no repercussions for its aggression and imperialist endeavors.

Then of course there are Iran’s terror proxies.

Hezbollah, whose forces now operate openly in Syria and Lebanon, is reportedly active as well in Iraq and Yemen. These forces behave with a brazenness the likes of which we have never seen.

Hamas too believes that its nuclear-capable Iranian state sponsor ensures that regardless of its combat losses, it will be able to maintain its regime in Gaza and continue using its territory as a launching ground for assaults against Israel and Egypt.

Iran’s Shiite militias in Iraq have reportedly carried out heinous massacres of Sunnis who have fallen under their control and faced no international condemnation for their war crimes, operating as they are under Iran’s protection and sponsorship. And the Houthis, of course, just overthrew a Western-backed government that actively assisted the US and its allies in their campaign against al-Qaida.

For their proxies’ aggression, Iran has been rewarded with effective Western acceptance of its steps toward regional domination and nuclear armament.

Hezbollah’s activities represent an acute and strategic danger to Israel. Not only does Hezbollah now possess precision guided missiles that are capable of taking out strategic installations throughout the country, its arsenal of 100,000 missiles can cause a civilian disaster.

Hezbollah forces have been fighting in varied combat situations continuously for the past three years. Their combat capabilities are incomparably greater than those they fielded in the 2006 Second Lebanon War. There is every reason to believe that these Hezbollah fighters, now perched along Israel’s borders with Lebanon and Syria, can make good their threat to attack and hold fixed targets including border communities.

While Israel faces threats unlike any we have faced in recent decades that all emanate from Western-backed Iranian aggression and expansionism carried out under a Western-sanctioned Iranian nuclear umbrella, Israel is not alone in this reality. The unrolling disaster also threatens the moderate Sunni states including Jordan, Egypt, Saudi Arabia, Kuwait and the United Arab Emirates. The now regional war in Yemen is but the first act of the regional war at our doorstep.

There are many reasons this war is now inevitable.

Every state threatened by Iran has been watching the Western collapse in Switzerland.

They have been watching the Iranian advance on the ground. And today all of them are wondering the same thing: When and what should we strike to minimize the threats we are facing.

Everyone recognizes that the situation is only going to get worse. With each passing week, Iran’s power and brazenness will only increase.

Everyone understands this. And this week they learned that with Washington heading the committee welcoming Iran’s regional hegemony and nuclear capabilities, no outside power will stand up to Iran’s rise. The future of every state in the region hangs in the balance. And so, it can be expected that everyone is now working out a means to preempt and prevent a greater disaster.

These preemptive actions will no doubt include three categories of operations: striking Hezbollah’s missile arsenal; striking the Iranian Navy to limit its ability to project its force in the Bab al-Mandab; and conducting limited military operations to destroy a significant portion of Iran’s nuclear installations.

Friday is the eve of Passover. Thirteen years ago, Palestinian terrorists brought home the message of the Exodus when they blew up the Seder at Netanya’s Park Hotel, killing 30, wounding 140, and forcing Israel into war. The message of the Passover Haggada is that there are no shortcuts to freedom. To gain and keep it, you have to be willing to fight for it.

That war was caused by Israel’s embrace of the notion that you can bring peace through concessions that empower an enemy sworn to your destruction. The price of that delusion was thousands of lives lost and families destroyed.

Iran is far more powerful than the PLO. But the Americans apparently believe they are immune from the consequences of their leaders’ policies. This is not the case for Israel or for our neighbors. We lack the luxury of ignoring the fact that Obama’s disastrous diplomacy has brought war upon us. Deal or no deal, we are again about to be forced to pay a price to maintain our freedom.