At a place where memories are fleeting, some powerful ones are being made through a glass door 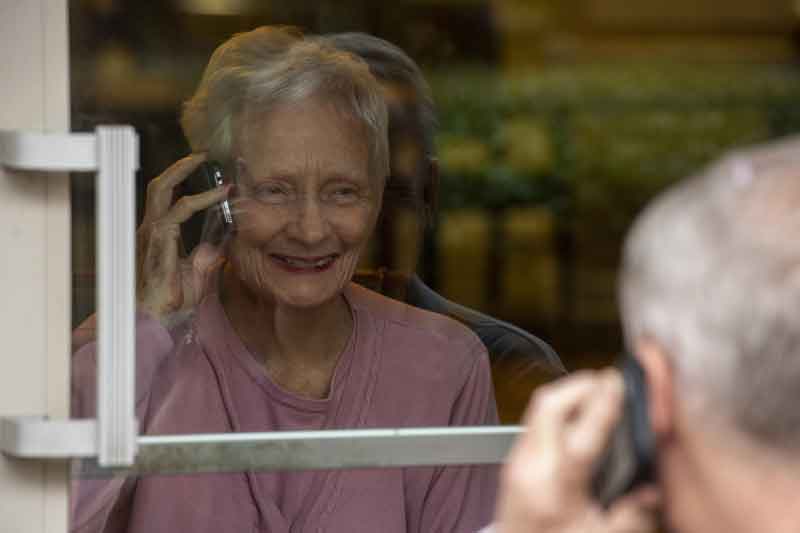 Only three months ago, Anna Epstein sat in a theater with her mother and daughter, watching the movie "Cats."

That day feels so distant.

Distant enough that on a recent night, as Epstein watched the movie with her 9-year-old daughter at home, just after the song "Memory" played, she received an email that left her sobbing. Her mother's assisted living center, she learned, had figured out a way for families to safely visit.

"Mommy, what's wrong?" she recalls her daughter Ridley asking when she noticed her crying. She assured her, "These are happy tears."

Before that email came, Epstein hadn't seen her mother face-to-face for weeks.

At first, she decided to stay away from the Brookdale Arlington in Virginia because she had traveled out-of-state and didn't want to unknowingly carry the novel coronavirus inside the building. And now, the assisted living center, like many places that house the elderly, who are the most vulnerable to the deadly virus, allows only essential personnel inside.

What that has meant for the 143 residents there is that regular visits have become mostly virtual ones.

A wife who once took her husband his dry cleaning every day, because he has dressed sharply his entire life, has to leave that dry cleaning at the door.

Sisters who took regular walks through the courtyard together, singing songs aimed at stirring nostalgia, have been forced to stop taking those shared steps.

Daily lunches, weekly dinners, real-life hugs - they have all been put on hold.

That press of the pause button on human interactions, of course, is not unique to those residents. Social distancing has forced most of us to pull away from people we used to gravitate toward - co-workers, friends, family members - but the loss of time together is arguably crueller for those who have less of it to lose or whose memories are slipping away. The residents at Brookdale Arlington range in age from 60 to 101, and many have some form of dementia.

That means staff members have to tell some of them again and again about the virus. They have to remind some of them day after day why no one is visiting.

Which is what makes what happened there on Friday so meaningful.

That day, in an effort to give residents and their relatives a way to form new memories, the staff turned the two glass doors between a dining room and an outdoor courtyard into a meeting space. They decorated the area with paper flowers and green vines, and placed comfy chairs on each side of those doors.

Residents wouldn't be able to embrace their visitors, but at least they could see them. They could touch the glass and know that only a sliver of space separated them from their spouses, siblings, children and grandchildren.

Really, though, they could have called it anything and Epstein would have shown up.

She and Ridley, arrived just after noon, eager to see Epstein's mother, Donna Forsman. The 78-year-old, in her younger years, worked in advertising and wrote "The '21' Cookbook" with chef Michael Lomonaco.

Forsman had helped the staff on Thursday night decorate the space. She told them that she wanted to make sure it was perfect for her granddaughter.

By the time the girl slipped into her chair, Forsman was already waiting. She wore a long floral skirt that purposely matched the decorations around her and, by chance, also the bouquet of flowers her granddaughter had brought her as a surprise.

Ridley pressed a palm against the glass, and her grandmother did the same.

They then grabbed a phone and talked.

Ridley told her what she is studying now that her school is closed. She talked about the ocean, planets and bees. "They're not black and yellow," she said. "They're brown and yellow."

During another moment, she told her grandmother, "You look pretty."

"How are you holding up?" Epstein asked her mom when they spoke. "You need some Netflix recommendations?"

She also asked her if she needed any snacks. Forsman requested salt, Fritos and Peppermint Patties.

As the two talked, Epstein occasionally turned to her daughter to remind her, "Stop touching your face."

Despite the pink paper flowers in front of them and the cherry blossoms floating to the ground behind them, there was no forgetting the bleak reason they weren't inside. Hand sanitizer sat on a nearby table. A bottle of disinfectant rested on the brick edge of a foot-level flower bed. And Forsman held a handout that read, "Practicing Social Distancing."

Epstein said her mom is in the early stages of dementia, and while she is aware of what is going on with the virus, she needs occasional reminders of the dangers. When she was told about the visit, she asked the staff if she could sit on the courtyard swing with her granddaughter. She had forgotten they couldn't touch.

Chloe Burke, the executive director of Brookdale Arlington, said about half of the residents have some form of dementia.

Keeping those residents connected to their family members, she said, is especially important.

"They may not recognize what is going on in a FaceTime call or on an iPad, and being able to see their loved ones in front of them is huge," she said. Huge for them and their relatives. "One of the family members said to me, 'I'm afraid they may not remember me if I take this time away.' "

Burke said the idea for the visits grew out of a staff meeting. A staff member noted that they had all been so focused on the logistics of keeping residents safe that it would be nice to do something that went beyond that. After they sent an email asking families to let them know if they would be interested in scheduling a through-the-door visit, they received more than 20 responses in the first 30 minutes.

On Friday, the staff scheduled 10 visits, one after another, to allow time to disinfect the area after each encounter. Burke said they hope to hold more visits in the coming weeks and are looking into ways to allow people to play games and share other experiences. One idea they are considering is a "wine-down Wednesday" that would involve serving wine and cheese on both sides of the doors.

Burke said one resident on Friday told her she cried during the entire visit with her daughter. She also joked about how eager she was to get to the meeting space from her room.

"She said, 'I was so excited I almost ran out without my underwear,' " Burke said, laughing.

Epstein, who is her mom's only child, said she responded immediately to that email that asked whether she wanted to schedule a visit.

"I don't know if in a week she will remember we did this," Epstein said. "But I know what it means to her now. And I know what it means to us. I'm not blind to the fact that if my mother were to get this, I couldn't be with her. I couldn't be with her in the hospital. So I'm going to take every chance I can to see her face, while continuing to hope that won't be the case."

When it came time to say goodbye that day, Epstein assured Forsman she would call her later.

Ridley kissed two of her fingers and pressed them against her side of the door. Her grandmother did the same. Then all three generations, at once, placed their hands against the glass and held them there for seconds, then minutes, none of them eager to pull away.