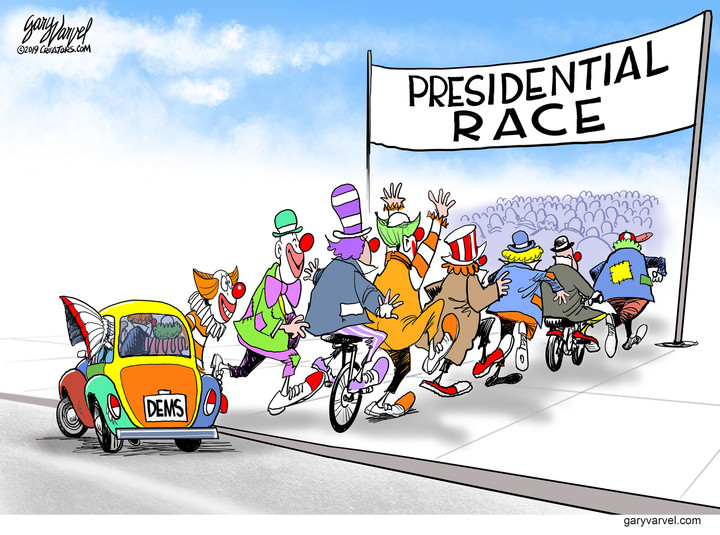 In case you didn't hear the news, the Democrats will hold their national convention next summer in Milwaukee, the first time that the Wisconsin city has hosted such a gathering for either major party.

It wasn't a surprise. Milwaukee, home to scads of fictional television characters as well as a decades-long embrace socialism that sound stranger than fiction, nosed out Miami and Houston. If you've been to either of the latter two cities during mid-July (the 2020 Democratic National Convention will run from July 13-16), you'll better appreciate the Democratic National Committee's thinking (Milwaukee's July weather usually hovers around a high of 80Â° F).

Well, that and the prospect of the convention as a springboard for returning Wisconsin to the Democratic "blue" column later that fall. Before Donald Trump, the last Republican to carry the state: George H.W. Bush in 1988.

About the conventional wisdom that convention locales and states' voting habits go hand in hand: don't buy it.

I say this as a Californian who, every four years, lives through the hype of the Golden State as a big player in the nominating process. But try as California might â€“ moving its primary to Super Tuesday in March of next year â€“ that probably won't be the case. Not unless Sen. Kamala Harris remains relevant after the first four primaries, then wins big in her home state and steamrolls her way to the nomination.

Otherwise, the California dreaming becomes another case of Charlie Brown whiffing on the football. Unfortunately, national convention-planning falls under the same category.

In 1988, the Democrats held their convention in Atlanta, to showcase the party's supposed newfound strength in the New South (the "Boston-to-Austin" ticket of Michael Dukakis and Lloyd Bentsen). Later that fall, the party won one state (West Virginia) below the Mason-Dixon Line.

Eight years later, Republicans applied the same logic to California, which voted for Bill Clinton in 1992 but had gone GOP six straight times prior to that in presidential votes. The Dole-Kemp ticket lost the state by nearly 13 points.

In 2016, Hillary Clinton cracked the glass ceiling in Philadelphia. You know how the rest of the story goes (she lost Pennsylvania by 44,000 votes, a difference of less than 1%). Republicans partied in Tampa in 2012; Barack Obama carried Florida. Democrats held their bash in Charlotte (the scene of next summer's Republican National Convention); North Carolina went to Mitt Romney.

Four years prior to that, Republicans gathered in Saint Paul, Minnesota â€“ a state John McCain failed to carry and a convention most memorable for Sarah Palin's national debut and one Republican senator's "wide stance" in an airport bathroom.

The last time both presidential candidates carried the states that hosted their party's national convention? Try 1992 (Bush 41 in Houston; Bill Clinton in New York City). Otherwise, the pattern holds of at least one candidate failing to win the convention's state in the general election.

My intent in rehashing this history isn't to belittle the Democrats' choice. Actually, it makes sense. Trump carried Wisconsin by just 22,748 votes (440,00 votes were cast in Milwaukee County alone). If that arena-sized number of Wisconsinites likes what it sees in Milwaukee and votes Democratic that fall, it will have been worth the venture.

Besides, Wisconsin Democrats have a cheesehead-sized chip on their shoulder after the 2016 election and the perception of Mrs. Clinton giving their battleground state short shrift (she didn't campaign there once during the fall election). The four days of speeches and sermonizing and relentless Trump-bashing will help as a morale booster.


And so the Milwaukee convention will fit into a narrative of Democrats looking to win back the Upper Midwest.

But will the media spend any time delving into the city's socialist past?

Milwaukee had three socialist mayors during a span from the midpoint of Woodrow Wilson's presidency to the end of the Eisenhower Era. The town was known as the "Machine Shop of the World"; the focus on sprucing up neighborhoods with new water and sanitation systems earned the nickname "Sewer Socialists."

What a perfect backdrop for a self-proclaimed "Democratic Socialist" to claim a national party's presidential nomination for the first time (yes, that would be Vermont Sen. Bernie Sanders, as Massachusetts Sen. Elizabeth Warren insists she's not one and the same).

Don't look for Sanders to hopscotch along the city's sidewalks ala Laverne and Shirley ("Schlemiel! Schlimazel! Hasenpfeffer Incorporated")?

But as he's Jewish, does Bernie understand those Yiddish words?

A "schlemiel" is haplessly inept. A "schlimazel" is an inveterate blunderer.

Will that be the real legacy of next year's winner in Milwaukee?