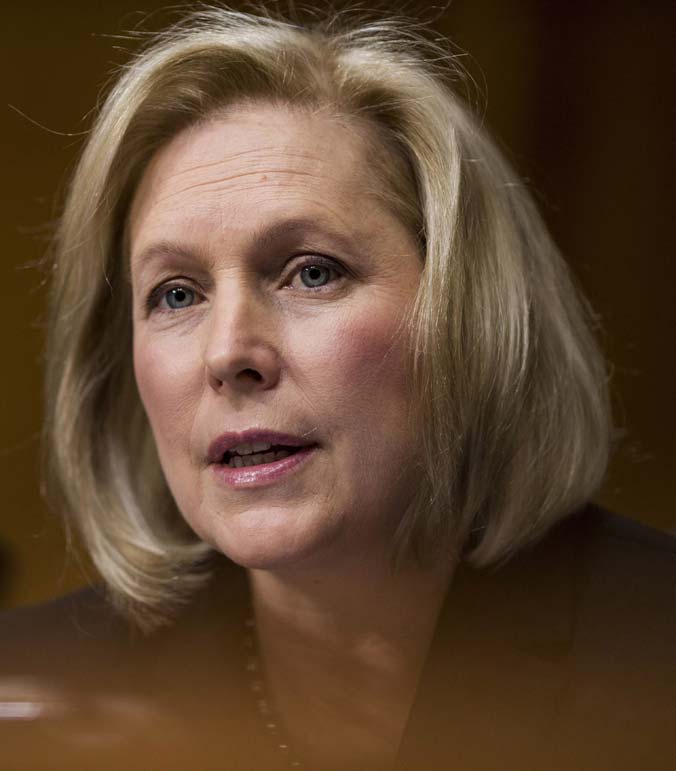 In April 2018, Sen. Kirsten Gillibrand urged Senate leaders to pass her bipartisan Congressional Harassment Reform Act. "Congress has a sexual harassment problem -- and isn't taking it seriously," Gillibrand wrote in Fortune magazine. "If we can't clean up our own act, how can anyone expect Congress to do the right thing for victims and survivors in the rest of the country? Congress has to do better. I believe that elected officials should be held to the highest ethical standard -- not the lowest."

Just a few months later, when a woman in her own office reported that a married male staffer was making repeated, unwanted and increasingly aggressive sexual advances toward her, Gillibrand did not do the right thing and fire him.

Politico reported that "Less than three weeks after reporting the alleged harassment and subsequently claiming that the man retaliated against her for doing so, the woman told chief of staff Jess Fassler that she was resigning because of the office's handling of the matter."

Gillibrand's office defended her inaction, saying in a statement that the senator's office had conducted a "full and thorough investigation" that included "multiple interviews with relevant current employees who could potentially corroborate the claims" but did not find cause to fire the male staffer.


They could not "corroborate" her claims? Gillibrand was willing to destroy Brett Kavanaugh's career, and derail his Supreme Court nomination, over uncorroborated allegations, but when a female employee alleged that she was sexually harassed by one of Gillibrand's closest aides, the senator hid behind a supposed lack of corroboration. Why was her office unable to corroborate the allegations? Maybe it's because they never contacted two former employees the woman said could corroborate her story?

Politico had no problem doing that. The news organization interviewed more than 20 former Gillibrand staffers who alleged a pattern of harassment by aide Abbas Malik. One former staffer said that "Malik often called her fat and unattractive to her face and made light of sexual abuse."

Others said Malik "regularly made misogynistic jokes, frequently appraised what they wore, disparaged the looks of other female staffers and rated the attractiveness of women who came in for interviews." If a reporter could dig this information up, then her office could have done so, too. Only after Politico contacted Gillibrand's office about the additional allegations against Malik did the senator finally fire him.

The fact is, while publicly positioning herself as a champion of harassment victims, Gillibrand apparently allowed a serial harasser to torment her female staff. And when a woman on her staff risked her own career to report the abusive conduct, "I was belittled by her office and treated like an inconvenience," the woman told Politico. "She kept a harasser on her staff until it proved politically untenable for her to do so."

Why did Gillibrand fail to act? Politico reported that "Malik had spent years by Gillibrand's side as her driver -- the senator officiated at his wedding -- while the woman was a more recent hire and had significantly less stature in the office." She apparently did not take action because she liked him personally.


The hypocrisy is rank. Gillibrand is pushing legislation, the Military Justice Improvement Act, that would make independent prosecutors, rather than military commanders, responsible for handling allegations of sexual misconduct in the military, because of "the bias and inherent conflicts of interest posed by the military chain of command's sole decision-making power." Yet when faced with such allegations in her own office, she had no concern about bias and inherent conflicts of interest.

Gillibrand is a political opportunist who has seized on the #MeToo movement to advance her political career. In 2017, she shocked many Democrats by declaring that President Bill Clinton should have resigned during the Monica Lewinsky scandal. But she said nothing about Clinton's misconduct when he campaigned for her in 2006 or when he headlined a fundraiser for her in 2009, and she was happy to accept the help of the Clinton political machine to raise an estimated $70 million for her.

It was only after Hillary Clinton lost the 2016 presidential election, and the Clinton political machine was finally defunct, that Gillibrand finally stepped forward to condemn him. What a profile in courage.

Gillibrand's idea of congressional harassment reform is that high-profile men such as Sen. Al Franken, D-Minn., must go, but her driver is allowed to stay -- at least until the media got wind of it. As Gillibrand put it in her Fortune op-ed, "Congress needs to show leadership and make it clear that we won't tolerate sexual harassment anymore." She can start in her own office.