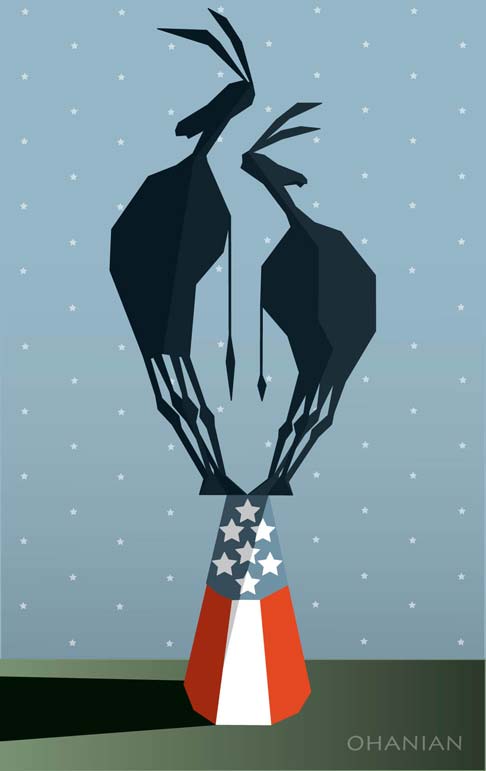 The latest Quinnipiac poll shows a familiar quartet at the top of Democratic primary field - former Vice President Joe Biden at 29 percent, Sen. Bernie Sanders, I-Vt. at 19 percent, former congressman Beto O'Rourke, D-Texas, at 12 percent and Sen. Kamala D. Harris, D-Calif., at 8 percent - with Sen. Elizabeth Warren, D-Mass., at 4 percent tied with ... South Bend, Indiana, Mayor Pete Buttigieg (!). Buttigieg is the only candidate to date who seems to have broken out of obscurity, outpacing both Sens. Cory Booker, D-N.J., and Amy Klobuchar, D-Minn., at 2 percent each.

None of these numbers are predictive of the results of a single primary or the race as a whole. Polling, however, will affect coverage and fundraising, and in turn fundraising totals for the first quarter, ending March 31, will drive coverage and polling.

At the most basic level, the race has a huge field, but most candidates at this stage aren't relevant. For those at or below 1 percent, making the debates is a matter of political life or death. Improvement in their position rests with a breakout performance against better-known candidates.

Let's look at the top six.

Biden is the clear front-runner without even entering the race. Whether he takes off after entering the race, crowding out others and mopping up support from moderate voters among whom he is the clear favorite (at 37 percent, more than 20 points ahead of the next candidate) will determine whether he is the nominee. Biden also dominates among female voters and African-Americans, but as to the latter, the same was true of Hillary Clinton in the early stages of 2008. (Not until President Barack Obama won Iowa did African-American voters coalesce around him.) While women are a disproportionate share of primary voters who could well decide the race, so far they show no preference for electing a woman. Asked whether, all things being equal, they preferred a man or woman, 56 percent of women said it made no difference, while 32 percent said they'd prefer a woman.

Biden's key question: Will his first day in the race be his best, or will he easily sidestep concerns about how he treated Anita Hill and his record on race and criminal justice? (Since he now has huge leads among both women and African-Americans, the concern seems mostly media-driven at this point.) His biggest strength: Gravitas, experience and breadth of support.

Sanders not only has failed to expand beyond his core base but also has dropped from previous highs in national polling showing him in the mid-20s. He has his "angry man act" fueled by anti-Wall Street rhetoric, but that only gets him so far. Moreover, the act is old now, and no longer even radical since many candidates have run to the left. He has other problems, including his inexplicable failure to release 10 years of tax returns, which he promised to do more than a month ago, and his position on guns. He, too, voted for the 1994 crime bill that is largely responsible for mass incarceration, which disproportionately affects African-American men.

Sanders' key question: Can he sell the old, angry socialist routine when his opponent isn't Hillary Clinton? His biggest strength: For whatever reason, he mostly gets a pass from the mainstream media, whose expectations seem lower for him than for other candidates.

O'Rourke overcame some opening bobbles, raised a ton of money and effectively used free media to climb into the top tier. Now, he'll have to stay there - as more scrutiny and more demands for specific policy answers come his way. His big advantage is avoiding an ideological pigeonhole. He can pick off Sanders' voters from the left looking for inspiration and still reassure moderates that he won't be burdened with the "socialist" tag. The debates will be a critical test, as candidates behind him try to knock him down a peg and those ahead of him try to plant the idea that he isn't tough enough to stand up to President Donald Trump. (By a 52 percent to 39 percent margin, Democrats say standing up to Republicans is preferable to working with Republicans.)

O'Rourke's key question: Can he shed his image as a Gen X slacker? His biggest strength: With refreshing optimism, boundless energy and no day job, he can outwork most everyone in the field.


Harris established herself early on as a contender. While getting less coverage than others, she is drawing huge crowds and generating excitement on a par with O'Rourke. Her biggest asset is herself - she conveys to audiences that she sees them, cares about them and is passionate about her fight against injustice, inequality, etc. She's now adding meat to her campaign, most recently rolling out an initiative to greatly increase teachers' pay, which practically no Democratic primary voters will oppose. She might take a page from Stacey Abrams's book and make her pitch to rural, poorer voters who would be helped by the same policy ideas she is selling in places such as Atlanta and Houston. After all, most of the spate of teachers' strikes occurred in red America.

Harris' key question: Can she shine in the debates, allowing her to chip away at Sanders' and O'Rourke's support? Her biggest strength: The "it" factor.

Buttigieg grabbed the dark-horse moniker by showing his brains, sincerity and seriousness. He's potentially this election's true outsider, offering the appeal of someone grounded in the heartland. He's managed to appear polished but not artificial. He's adept at presenting very bold ideas (e.g. lose the electoral college) without sounding radical. His "born to be useful" line suggests that he has a way to differentiate himself from the crowd: He has risked his life to serve his country. Military service to his country makes him an effective messenger to attack Trump's financial corruption and self-enrichment (it's about the country, not yourself) and to advocate for an alternative to "endless wars" (without sounding like a left-wing isolationist). His message of generational change got him on the map, but he could use a few meaty initiatives (e.g. a workable green deal, a 21st-century job training package).

Buttigieg's key question: Now that he has gotten noticed, can he convince voters that he would be a viable nominee? His biggest strength: A fresh face, he satisfies Democrats' longing to define their party as the smart one and the real party of "values."

Warren has cornered the market on detailed, progressive ideas. More than any candidate, she is forcing the media and voters to at least think about substance. She has a remarkable ability to lay out a theme (the system is rigged), present a logical argument to support it and then present detailed solutions. Nevertheless, she is going the wrong way in the polls, and it's impossible to determine whether a snap judgment as to her electability or some other factor is hindering her. Her first big plan, and maybe her best, was her ethics bill that goes after corruption and other threats to our democracy. Warren and Kirsten Gillibrand are the only ones so far to post 10 years of tax returns, and they would be wise to challenge all of their opponents in the debates to do the same. (That might make Sanders squirm.)

Warren's best moment so far might have been her discourse on faith in the CNN town hall. Now that she has a raft of policy ideas, she might try "preaching" more, using her policies to show she really does understand the message of Matthew 25. ("That passage is not about you had a good thought and held on to it. You sat back and were just a part of - you know, thought about good things. It does not say, you just didn't hurt anybody, and that's good enough. No. It says, you saw something wrong. You saw somebody who was thirsty. You saw somebody who was in prison. You saw their face. You saw somebody who was hungry, and it moved you to act.")

Warren's key question: Can she reverse the perception that she's not electable? Her biggest strength: The wonkiest, most intellectually honest candidate in the race, she has done what we ask candidates to do - tell us what she thinks and specifically what she plans to do.