Bernie is being Bernie, and plenty of Dems don't like it 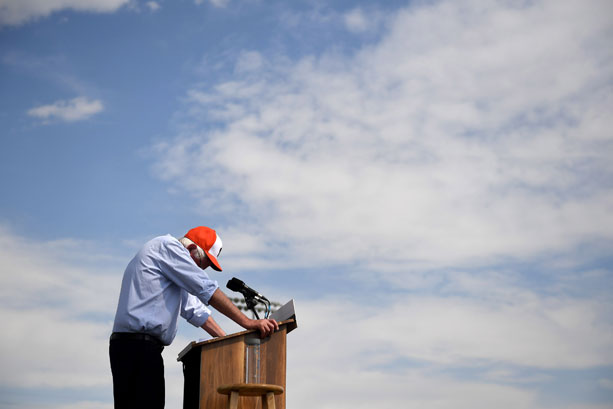 "Since December, David Sirota has, on Twitter, on his own website, and in columns in The Guardian, been trashing most of Sanders's Democratic opponents - all without disclosing his work with Sanders - and has been pushing back on critics by saying that he was criticizing the other Democrats as a journalist. He centered many of his attacks on Beto O'Rourke, but he also bashed Kamala Harris, Cory Booker, Joe Biden, Kirsten Gillibrand, Michael Bennet, John Hickenlooper, Mike Bloomberg, and even Andrew Cuomo.

"Sirota's hiring as a senior adviser and speechwriter was announced by the Sanders campaign on Tuesday morning after The Atlantic contacted the campaign and inquired about the undisclosed role Sirota held while attacking other Democrats."

As a matter of journalistic ethics, such deception is inexcusable. One cannot present oneself as an independent actor - even one with a distinct political viewpoint - while secretly working on behalf of one candidate as his hatchet man, and all the while denouncing Democratic intramural fights.

As a political matter, Sanders, I-Vt., has stirred up a hornet's nest, reviving resentments from 2016 in which mainstream Democrats saw Sanders as promoting himself and his cause at the expense of party unity. As Dovere wrote for the Atlantic, "The online fury of Sanders's supporters was one of the most defining characteristics of his 2016 campaign. Sanders himself has said he is sensitive to that, as well as to accusations that he created divisions within the Democratic Party during his 2016 run against Hillary Clinton."

The hire is especially worrisome for Democratic candidates and their staffs who vow to support the nominee in an effort to avoid a bloody internecine fight. As for Sirota, his reputation for vicious, personal attacks was well-earned. The Atlantic found, "On Monday night, after being contacted for a second time by The Atlantic with a list of specific questions about his undisclosed work for Sanders, Sirota did not respond to the email but deleted more than 20,000 tweets. He left fewer than 200 online." That's what you call a guilty mind.

Social media exploded with criticism of Sirota's extreme views (e.g., praising former Venezuelan dictator Hugo ChĂˇvez), his underhanded advocacy for Sanders and, even with all that, Sanders's decision to hire him. Just a few examples of the tweets from Tuesday night:

"Setting aside Sirota's merits, this is . . . pretty unethical on both his part and the campaign's." posted Zack Beauchamp of Vox.

Offered Yair Rosenberg of Tablet Mag: "This is pretty unethical, and doubly so given that Sirota has spent much of his time bashing other Democratic candidates for *conflicts of interest*. I also don't get why Bernie feels the need to pay someone who would clearly advocate for him for free."

Boston Globe columnist Michael Cohen: "This is a very bad story for Bernie Sanders ... and what makes it such a head-scratcher is that even after Sirota's tirades against other Democrats Sanders STILL hired him to be his speechwriter."

Among the numerous long-time Democrats with whom I spoke about Sirota (none of which either works for or endorses a particular candidate), there was a common theme. A veteran Democratic insider tersely said, "David Sirota has been operating as a vicious attack dog against every Democrat who has been a threat to Sanders and, now, he's just being paid for it."

An alumnus of the Obama White House tells me, "The value we have as former government officials, especially those who worked with media, is the light we can shed on how the system works and how it's broken. That's why we need to be especially careful to disclose any relationships or conflicts when commenting publicly." The former staffer added, "It's not hard to do and gives even more credibility to what you're saying. By not disclosing, you're perpetuating the same shadiness that Bernie decries. To really show he's grown since the 2016 experience and has broader appeal, Bernie needs of show he can bring the party together after what will be a tough nomination fight."

In a similar vein, a veteran of multiple Democratic campaigns and progressive causes observed that Sirota's reputation is unique even in the hard-hitting world of social media political operators. "He's the perfect storm: self-righteousness, ideological zealotry, and bullying obnoxiousness."

At a time when Democrats are decrying President Donald Trump and his band of cronies for polluting political discourse, pitting Americans against one another and seeking to destroy political enemies by character assassination, Sanders' hire seems decidedly off-key. Rather than condemn Trump's tactics and appeal to voters' desire for something better, more high-minded, Sanders suggests through this hire that his operation will be just as mean-spirited as the current White House's. The prospect of replacing Sarah Sanders or Stephen Miller with Sirota doesn't exactly fill one with joy.

How important is this episode? It may consume mainstream media coverage and, once more, put Sanders - who previously had to deal with complaints of harassment from women during his 2016 campaign - on defense. Moreover, it may sit poorly with engaged Democrats who see this behavior as detrimental to the goal of beating Trump. Sanders, it seems, is once more a divider, not a uniter.