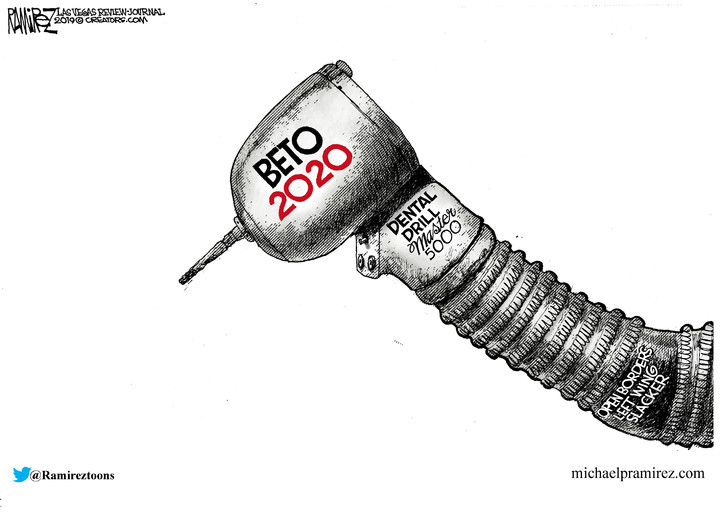 To a lot of women, and maybe some men as well, Beto O'Rourke can seem clueless if not self-absorbed. He has made a series of textbook "white privilege" utterances. "I'm just born to be in it," he told Vanity Fair about his presidential campaign bona fides. His wife is basically raising the kids "sometimes with my help," he joked with voters. A lot of women might not find that to be a knee-slapper.

After some frosty reaction, O'Rourke vowed that he would be more careful going forward about how he talks about his family. How he talks isn't as troubling is the mind-set he displays, the sense of entitlement that sets some voters' teeth on edge. Anna White of Vox writes:

"While men throughout history have been able to rely on their wives to provide child care while they fulfill their political ambitions, women have rarely been able to count on partners to do the same. And as New York Magazine writer Rebecca Traister pointed out, a woman who joked about being a part-time parent while on the campaign trail would be harshly criticized - and might find her political career over before it began. . . .

" 'Jack Kerouac-style, he roams around, jobless (does he not need a job?) to find himself and figure out if he wants to lead the free world,' Nia-Malika Henderson wrote at CNN in January, during what she called Beto O'Rourke's 'excellent adventure.' 'This is a luxury no woman or even minority in politics could ever have.' "

Sen. Amy Klobuchar, D-Minn., probably spoke for a lot of women when asked on "Meet the Press" on Sunday about O'Rourke's "born to be in it" comment. She responded coolly that, no, she "wasn't born to run for office, just because growing up in the '70s, in the middle of the country, I don't think many people thought a girl could be president." She added, "I wasn't born to run. But I am running."

I don't think any woman in the race would ever have dared to say she was born run for president, especially if she had so little experience, organization and policy substance. (The same could be said of nonwhite male candidates.)

Consider: Sen. Elizabeth Warren, D-Mass., is a national expert in financial regulation, is the author of multiple books and originally proposed the federal consumer protection agency. She's in her second term in the Senate and seems to feel obliged to roll out a detailed, well-researched plan on a different policy topic every few weeks. Oh, and she left school after getting married, later finished college and law school while raising two children and, to our knowledge, never handed her children off to her spouse so she could hit the road to commune with strangers over losing a race.

Most candidates understand that how a candidate runs a campaign previews how they'll govern. They know better than to enter a presidential race without a signature policy initiative or deep understanding of an array of issues or legislative accomplishments or experience in government/military service.

With all the advantages and time (not even interrupted by a day job) O'Rourke had, he could have been expected to use some of the energy we now see expended arm-gesticulating and counter-jumping to construct a robust campaign organization or come up with serious policy ideas, just to show that, despite his skimpy record, he really was prepared to be president.

And when he recognizes the advantages he's had, he often juxtaposes self-awareness with jaw-dropping self-regard. "I also happen to be the only candidate from the United States-Mexico border at a time that that dominates so much of our national conversation and legislative efforts and the things that the president talks about," he told Chuck Todd on "Meet the Press." "There's one candidate who's there who can talk about the profoundly positive impact that immigrants have had on our safety and our security, as well as our success and our strength." Um, what about former mayor of San Antonio JuliĂˇn Castro? Sen. Kamala D. Harris, D-Calif., daughter of two immigrant parents and veteran prosecutor from California? He's certainly convinced of his own specialness, despite being surrounded by many more experienced and policy-proficient competitors.

And yet, who can say he's wrong? Donald Trump didn't need well-thought-out policy or much organization to win, not when he had free media wrapped around his finger. Similarly, for O'Rourke, star celebrity treatment and wall-to-wall coverage from the media are bestowed upon him for essentially just showing up. He raised more money in 24 hours ($6.1 million) than any candidate in the race, including Sen. Bernie Sanders, I-Vt. And it may be that his target audience - young voters - don't need a lot of particulars to abandon a crotchety socialist for a sunnier, fresher candidate who is comfortable in diverse settings.

Perhaps O'Rourke in the future will point to his own prescience on a topic (as President Barack Obama was able to do on the Iraq War) or present some truly new ideas. To his credit, he's not simply racing to the left to catch up to Sanders. He sure seems capable of deep thought and concentrated effort, and he must be savvy enough to know he cannot waltz through the race on a cloud of empty phrases and a dizzying array of hand gestures.

We don't need a national therapist or preacher (although both might come in handy); we need a chief executive and commander in chief. Voters in 2020 will be looking for someone with focus, tenacity, humility and intellectual seriousness - a contrast to President Trump, in other words. We've had a president who likes to just wing it, and it's not a pretty sight.

If O'Rourke starts projecting some maturity and weightiness, he can avert a lot of eye-rolling, if not out-and-out resentment, especially among women and nonwhite voters who know that in their own jobs they cannot afford to be flip or facile.