Yes, the Republican Party has changed since 2016. You think the Dems haven't? 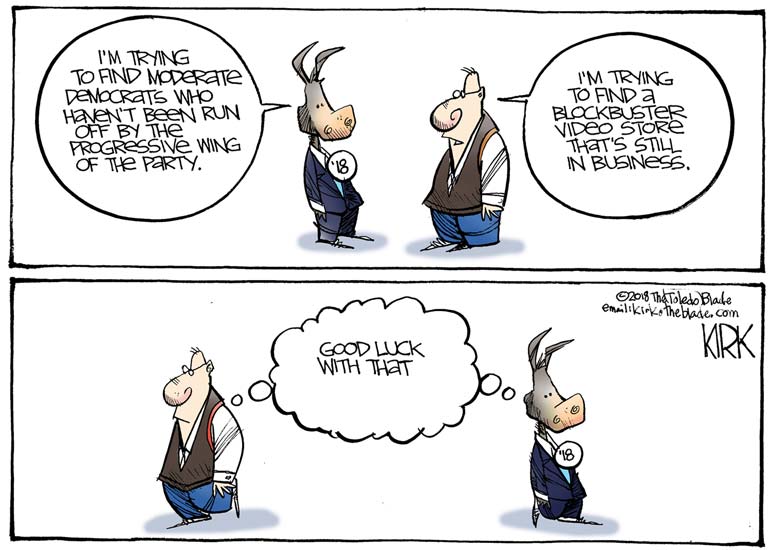 The transformation of the Republican Party under President Donald Trump is a well-told story. Less noted, but no less significant, is the change in the Democratic Party during the same period. Heading into 2020, neither party is what it was when Donald Trump ran against Hillary Clinton in 2016.

The changes are not symmetrical. Trump's wholesale takeover of a Republican Party that once stood for free trade, deficit-reduction, entitlement reform and internationalism speaks to the power of an individual to bend an institution in his direction and recast it in his image.

What has happened to the Democratic Party is much the opposite. The party has been turned upside down, changed not by a strong or prominent leader but by many ordinary people whose power is in the collective. Once a party that was beholden to big donors, shaped by its leaders and shadowed significantly by the Clintons (both before and after Barack Obama's tenure), Democrats are now powered at and by the grass roots - financially, organizationally and ideologically.

Geoff Garin, the veteran Democratic pollster, crystallized this new reality during a recent conversation when he observed that the changes in both parties during a single four-year cycle may be as significant as the country has seen in generations. "In 2015, the Republicans were not the party of Trump, and now they are wholly that," he said. "In 2015, the Democrats were more of a top-down party. The party of 2019-2020 is much more driven at the grass-roots level."

The upheaval in the Republican Party has flummoxed establishment leaders - elected and otherwise. Some have joined the Never Trump resistance, though they have no place to go and no one to lead them. Others have simply withered under presidential pressure, falling in line with silence or acquiescence when the president demands. Occasionally they register their dissent, though carefully and without forcing a clear break.

Elected Republicans are intimidated by a Trumpian GOP electorate that follows his lead. Those who dare go against Trump can see their careers destroyed, such as former congressman Mark Sanford of South Carolina, who was defeated in his primary last year after repeated criticisms of the president. Those who wholeheartedly embrace him can see their careers rise, with no better example than newly elected Florida Gov. Ron DeSantis, who went to extremes to depict himself as devoted to Trump. He was repaid by repeated campaign visits from the president that likely provided him his slender margin of victory.

The Democrats are beginning to come to terms with what their newly constituted party. They got a big dose of it this past week in the House, as they wrestled with how to respond to controversial comments by freshman Rep. Ilhan Omar, D-Minn., about supporters of Israel that drew widespread criticism as being anti-Semitic.

As they were preparing to send a resolution to the floor condemning anti-Semitism, in a rebuke of Omar, House Democratic leaders felt a revolt well up from beneath them. Allies of Omar pushed back. The resolution was altered to condemn all forms of hate.

The revised resolution was a clear concession to the makeup of this new Democratic Party, embodied in the new House Class of 2018. The episode showed that a party with many new voices, who bring varied perspectives, values and life experiences that reflect the growing multiculturalism of the party's coalition, will find some issues more complicated, more vexing and more controversial than in the past.

This is one manifestation of what Democrats have been celebrating since they swept to the majority in the House last November. In this new class, there are more women, more people of color, more younger voices and a broader range of ideologies represented. They do not think alike, and they do not always march in lockstep with their elders.

A few weeks after the 2018 election, Rep. Ayanna Pressley, D-Mass., joined by a few of her newly elected colleagues, held news conference in Cambridge, Massachusetts. "I was not sent to Washington to play nice," she said. Pressley, who had defeated incumbent Democratic Rep. Michael Capuano in the primary, was signaling that she and the others were coming with their own agenda and were prepared to buck conventions in Washington, including their own leadership, if necessary.

The prime example of this is Rep. Alexandria Ocasio-Cortez, D-N.Y. If House Speaker Nancy Pelosi, D-Calif., is currently the titular head of the Democratic Party, the new congresswoman from the Bronx is the titular leader of a progressive grass-roots movement pushing the party to the left and elevating issues and causes to the forefront of the national debate.

This is true not just for some of the newly elected Democrats. It's also the case for some of those new to grass-roots activism. Many of the people who came off the sidelines to help Democrats win in 2018 and who got involved with groups like Indivisible don't like taking orders from the top down. They like power in the party decentralized.

Sen. Bernie Sanders, I-Vt., showed the power of this emerging grass-roots-dominated party in 2016. Few establishment Democrats gave him much of a chance when he entered the presidential campaign. Instead, he carried his fight with Hillary Clinton through the end of the primaries, fueled by an outpouring of people willing to organize on his behalf as well as tens and tens of millions in small-dollar contributions.

Sanders wasn't the first to tap money through internet fundraising. In 2008, Obama raised several hundred million dollars that way. But he was still dependent on big-dollar contributions and bundling by big-time fundraisers for a substantial share of his campaign war chest. Sanders proved that a candidate can prosper without those big donors.

Major donors aren't suddenly irrelevant, but for some candidates, they are no longer essential. And given the mood of the party, too much dependence on wealthy donors could become a political negative. The 2020 nomination campaign will pit those with grass-roots financial networks - Sanders, Beto O'Rourke, if he runs, and a few others - against those who will still need traditional donor networks.

Grass-roots Democrats have shifted the discussion of issues. The agenda Sanders promoted has taken root more broadly among rank-and-file Democrats. In the end, the desire to defeat Trump could override policy differences between the left and center-left. But many of those opposed to the most ambitious proposals for Medicare-for-all or the purest form of the Green New Deal will tread lightly in outlining their differences.

Democrats seem assured of having the most liberal platform in the party's history in 2020. Beyond some of the issues like health care and climate and guaranteed jobs, the progressive grass-roots could push the party's nominee into ot

her areas of cultural and economic liberalism. When he announced last week that he would not run for the 2020 nomination, former New York Mayor Michael Bloomberg alluded to the challenges of a moderate running in the current Democratic Party. "I believe I would defeat Donald Trump in a general election," he wrote "But I am clear-eyed about the difficulty of winning the Democratic nomination in such a crowded field."

Bloomberg was not explicit in what he said. His record on issues like guns and climate change could have appealed to the left of the party. But a white, male, centrist billionaire in the Democratic Party of today? That's not an easy lift, and so he has gone to the sidelines.

The party's fortunes depend heavily on the enthusiastic support of African-Americans, Latinos, women (especially those with college degrees), younger people and the LGBTQ community. One could argue that's been the case for a while. What's different is that those constituencies are more assertive in demanding power and attention from the party establishment. Their commitment to the party can now come with a price.

The bottom-up Democratic Party will test the leadership in Congress and those seeking the 2020 nomination, at times uncomfortably, as this past week illustrated. The changes don't mean that the most liberal candidate in the field will become the 2020 Democratic nominee, only that the game is being played under new rules. Power is shifting and those who do not navigate this new world will pay a price.