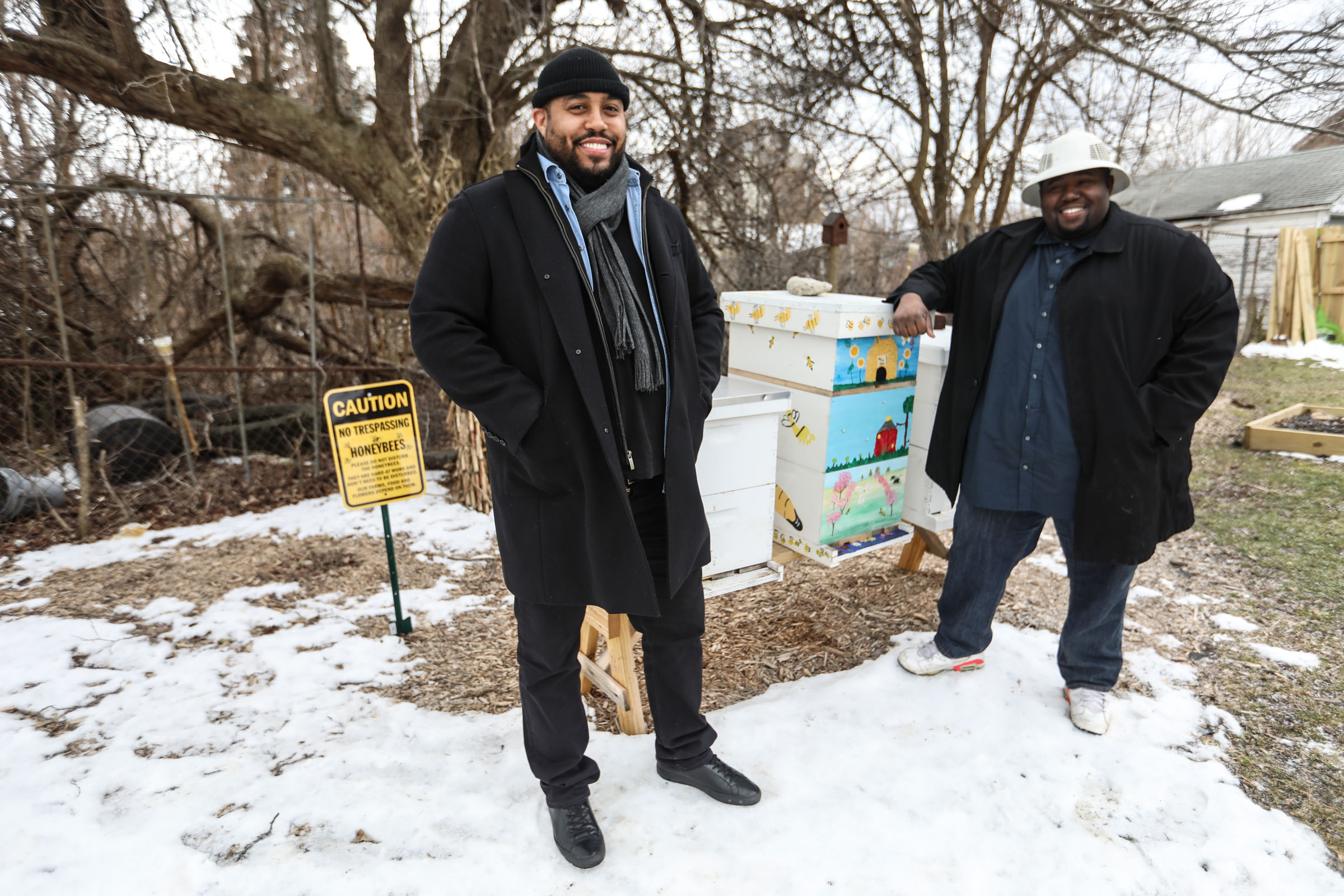 Keith Crispen, left, and Timothy Paule, both of Detroit, started a non-profit called Detroit Hives that transformed a vacant lot on the east side of the city to a bee hive and future farm. Detroit Free Press

This is a story about the streets of , and their empty, abandoned, overgrown lots, and by this point you're thinking crime, violence, heartbreak.

It's the first week of spring, so why not, instead of the same old negative talk, focus on rebirth? may be a city built for 2 million people that now has shrunk to a third of that, but empty can mean opportunity.

Just ask and , who discovered a certain population that is thrilled to see vacant lots with mature, unsprayed vegetation:

Which is why Tim and Nicole, who are dating, have purchased empty lots around the city -- some, they say, for as little as $100 -- and populated them with boxed beehives, all for the long-range purpose of making honey and educating the community.

"I wasn't an outdoorsy person," Nicole admits. "I had a fear of getting stung. But once we started studying about the medicinal properties of honey and I started loving these little creatures, I was like, oh, this will be perfect for vacant land."

Detroit Hives, the nonprofit Tim and Nicole cofounded, is just one of numerous, creative enterprises that have seen gold in our weeds and harvest in our dirt. Recently, there were stories about first vineyard in 60 years, which is reportedly cultivating two acres in the city. Urban gardens are growing fruits and vegetables at an ever-increasing rate. And while we're not likely to be mistaken for the farmlands of , we are, more and more, making hay when the sun shines.

Tim and Nicole have received a good amount of media attention since starting their efforts two years ago. I met them recently through some radio and TV interviews, and was struck by the energy they bring to their entrepreneurship. They're a bit of a vaudeville act, finishing each other's sentences, harmonizing on corny expressions like, "We think weeds are the bees knees!" and " is the place to BEE!"

But they really know their stuff. Tim went to and , majored in advertising, then found himself in a bit of a spiritual crisis, searching for some guidance and meaning in his life.

Something buzzed in the idea of beekeeping, an appreciation, perhaps, of its graceful, natural order. Tim and Nicole learned you can buy bees from local beekeepers, either in boxes with the queen separate from the colony, or a nucleus colony where the queen is already getting busy, laying up to 2,000 eggs a day while thousands of worker bees are ready to gather pollen and nectar.

They set up the hives on the lots they have purchased. And while they wait, nature does the rest.

"Most of () vacant lots are overgrown with so many beautiful different types of native wildflowers, like thistle or goldenrod, that provide a great food source for bees and pollinators," Tim says. "And no one is spraying any type of chemicals on (them) so bees and native pollinators have a place where they can forge."

It turns out neglected lots, in the bee universe, are primo real estate.

SOMETHING TO BEE-LIEVE IN

Tim and Nicole have also mastered the art of removing honey from the hive -- something you definitely don't want to try at home -- and they claim a single mature hive can yield 30-50 pounds. They bottle this amazing raw honey and are already selling it in local stores and their website, Detroithives.com, under the Detroit Hives label.

But beyond that, they want to educate Detroiters on bees and their critical importance to our ecosystem. They want to show how humans and bees can -- and must -- live together. They want to teach kids about the benefits of naturally grown food, something that is in short supply in many areas throughout our city.

"I call them food deserts," Tim says. "Most of these residents don't have access to fresh organic food. (They) have access to liquor stores, gas stations and fast food joints. So by putting that honey farm in there, we're able to provide the community with local raw honey and also support local food initiatives like urban farms."

It's all part of a taking-back-the-streets initiative that is growing day by day in the . And while the honey, fruits, vegetables -- even wine -- that emerge from these efforts are wonderful, the most important harvest is of something else:

It takes a certain positivity to see decay and weeds and think "this is something good." It would be much easier to run.

and didn't run. Neither did dozens of other urban farmers and food collectives who are now finding blossoms in our blight. They should be celebrated, especially in the first week of spring, where thoughts turn to sunshine and our city dares to dream.

OK. Not sure what that means.