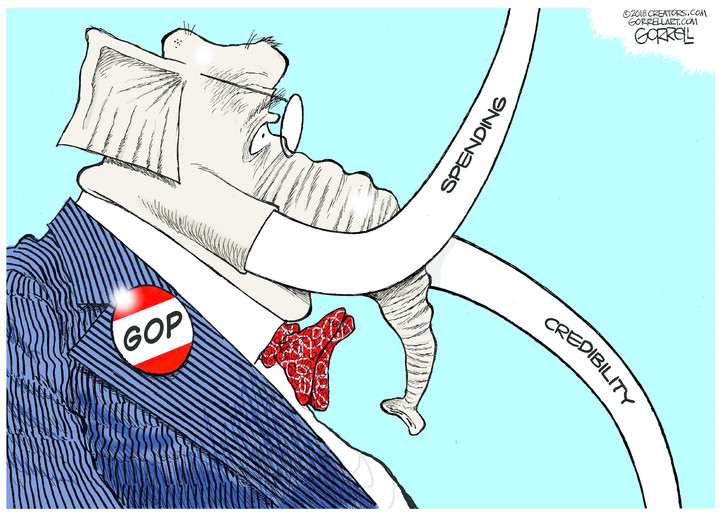 To the old maxim that a conservative is a liberal mugged by reality, should we count President Trump as a Washington crime statistic?

It sure looked that way Friday, what with the leader of the Free World daunted by the task of whether to sign or veto a 2,232-page, $1.3 trillion federal omnibus spending plan that few if anyone on Capitol Hill actually read before passing it â€“ the sort of Swamp tomfoolery that Trump's most ardent supporters believed would end by electing a populist disrupter like The Donald.

As its turn out, Trump and budgets are a funny dance team. As a candidate and elected leader, he's shown no interest in addressing entitlements, which is the true dragon in runaway federal spending (more on that in a moment).

Meanwhile, Trump claims he needs a sharper sword to slay the spending dragon â€“ specifically, presidential line-item veto authority. "To prevent the omnibus situation from ever happening again," Trump said at Friday's awkward stack-of-paper press avail, "I'm calling on Congress to give me a line-item veto for a government spending bills."

That sounds good, but there are at least three problems with that simple demand.

First, there's the matter of constitutionality.

Two decades ago, a 6-3 Supreme Court ruled presidential line-item authority to be unconstitutional as it gave the executive branch powers that rested with legislative branch. That decision came a couple of years after a Republican Congress had given a Democratic president (Bill Clinton) authority to do so. Clinton, in fact, exercised the power 82 times on nearly a dozen laws.

In the years since, Clinton's successor clamored for the same power â€“ a presidential sacre du printemps, if you will. George W. Bush called for line-item veto authority in March 2006. His popularity on the decline (Congress would soon change hands), that call went unanswered.

Four years later, in May 2010, Barack Obama also demanded what Trump presently wants, but with a twist. The basketball-loving Obama asked for, in essence, a budgetary shot clock. He proposed giving future presidents 45 days to scan the budget for fat and waste. Once Congress got the list of would-be cuts, it would have 25 days to approve or reject the entire list. Two years later, the GOP House voted to grant Obama line-item authority. However, it died in the Democratic Senate.

Trump could ask for another run at the authority, which might make for a good passage in his 2019 State of the Union Address.

But if his wish were granted, what exactly would change?

Here, we get to the second problem: line-item cuts don't cut very deep.

In October 1997, for example, Bill Clinton made budget-hawk headlines by slicing 38 items, worth about $290 million, out of a federal military construction appropriations bill. However, the White House had initially targeted more than 200 items, meaning that what Clinton actually struck out of the bill was far milder than threatened.

A look around the country shows that governors presently entrusted with line-item authority likewise aren't budgetary samurais. Florida's Rick Scott signed his state budget earlier this month, two days after receiving it from the Legislature. Scott vetoed just $64 million worth of line items (here's the list) out of a $88.9 billion budget.

Let's suppose Trump did have the power to selectively remove portions of the omnibus monstrosity sent his way. To please his base, he might have taken out the passages having to do with sanctuary cities, Planned Parenthood â€“ maybe even Chuck Schumer's $30 billion Hudson tunnel. But that's peanuts in the grander scheme of $1.3 trillion worth of federal spending.

And that takes us to the third problem: while Trump has every right to be disgusted the individual programmatic choices put before him, when does he grow horrified by what entitlements are doing to the nation's fiscal health?

If you care about this topic, by all means pick up a copy of my Hoover colleague John Cogan's The High Cost of Good Intentions: A History Of U.S. Federal Entitlement Programs. It chronicles how Washington got into this mess, going back to the very roots of the republic.

Cogan's sequel, should he pen one, would be scarier: $82 trillion worth of Social Security and Medicare benefits coming our way in the next three decades, a future president who in 2015 tweeted that he was "the first & only potential GOP candidate to state there will be no cuts to Social Security, Medicare & Medicaid", and an American electorate obliviously living in the now.

Presidents have been clamoring for line-item authority supposedly as far back as Ulysses Grant's presidency. You might remember Grant. He's the fellow with the big tomb not far from the same Hudson River that gets a new tunnel in this budget.

It seems an apt metaphor for Friday's budget signing and the concept of fiscal discipline that Republicans once owned. The event took place in the presidential residence, not a presidential resting place.

Still, it was an elaborate burial.