A Bush just won again in Texas, but he did it by proving that it's Trump's GOP 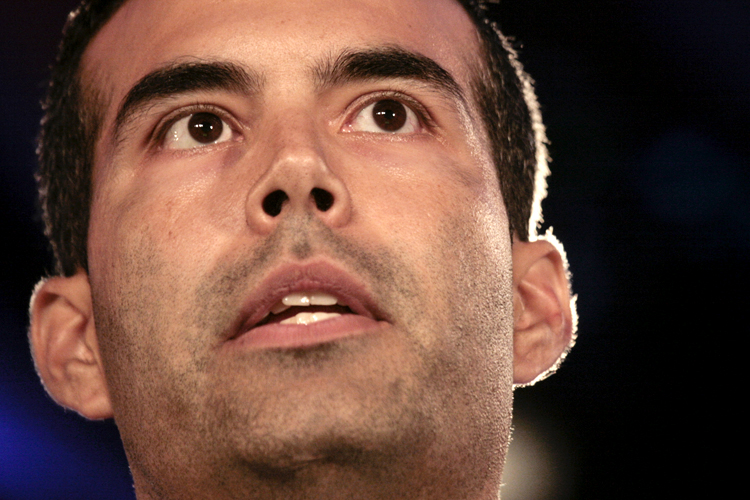 To date, there is perhaps no greater symbol that the Republican Party now belongs to President Donald Trump than what just happened in Texas Tuesday night.

George P. Bush, the last of the Bush political dynasty serving in public office, won his primary for land commissioner of Texas on Tuesday. And he won it only after he embraced his family's political enemy.

"I endorsed President Trump in 2016," Bush says in an recent ad, as his main opponent started to close in.

Bush has supported the president but begrudgingly at first. After his father, Jeb Bush, lost the nomination to Trump, Bush stood in a room of Texas Republican leaders and urged them to join the GOP presidential nominee: "From Team Bush, it's a bitter pill to swallow, but you know what, you get back up, and you help the man who won."

Bush's come-around to Trump is remarkable, considering he probably didn't need the president. If there's one candidate that could have successfully run without embracing Trump, it probably would have been Bush. He obviously had the name recognition to stand alone, as well as the money. His uncle, former president George W. Bush, is credited with launching Republicans' current dominance in Texas when he ousted a Democratic governor in 1994, said Robert Lowry, a political science professor at the University of Texas at Dallas.

Voters might have understood why he would have been wary of embracing the president, after Trump called his father "weak" and "an embarrassment to the family." And Bush is running a statewide campaign in a state that Gallup says gives Trump the lowest approval rating of any Republican state, at 39 percent.

But this is Trump's world, even in what was once Bush country. Analysts say among Texas Republicans, Trump's approval rating stands at 86 percent. By Bush's own calculations, his political future rested on a politician who hijacked the party his family once led.

"Everyone is embracing Trump," said Brendan Steinhauser, a Republican who runs a political consulting company in Texas, said of the primaries.

The most extreme example came in a congressional primary outside San Antonio and Austin, where 17 of the 18 GOP candidates were tripping over themselves to run ads wearing "Make America Great Again" hats or going fishing in the "swamp of Washington," The Post's Mike DeBonis reported.

Bush's primary struggles came from his predecessor, Jerry Patterson, who decided to run for land commissioner again after Bush came under fire for how his agency has managed the redevelopment of the symbol of Texas, the Alamo.

Under pressure, Bush's strategy morphed into the same as every other GOP primary candidate in Texas in a competitive race: Embrace the president as much as you credibly can.

In the first ad of Bush's campaign, he credited himself with ending a land dispute between local ranchers and the federal government.

In another version of the ad that went up a month ago, Bush is primarily giving credit to Trump for his signature rĂ©sumĂ© bullet-point: "I worked with President Trump to stop the illegal Obama land grab," Bush says.

"I saw that, and I literally thought to myself: 'Does your grandmother know you're running this ad?'" Lowry said. Bush's win, Lowry added, says "something about where the party is. The Republican Party, at least the primary voters, they're really Trump's party more than the Bushes."

Bush is probably well aware of what has happened to other Republicans who have bucked Trump. One of the most dramatic examples is in Arizona, where Trump critic and GOP Sen. Jeff Flake decided to retire rather than slug it out in a primary against a pro-Trump opponent.

If Bush hadn't embraced Trump and also lost his primary, pundits would certainly be asking if the Trump era signals the end of the Bush era - a father and son, politically vanquished in the span of two years. But Bush found a way to win in the Trump era, and now the only question is: Just how much more will he embrace the party's new leader?

Previously:
• 03/06/17 Latest GOP resignation could open the door to a brutal intraparty primary
• 11/21/17 The Intersection of faith, culture, and politics
• 11/06/17 Russia tried to corrupt the 2016 election - could it do the same Tuesday?
• 09/18/17 With their party's future on the line in the states, Dems can't agree on a playbook
• 09/13/17 Are Dems going to regret celebrating their debt limit deal with Trump?
• 08/16/17 Why is the FBI so interested in Paul Manafort that they were literally at his door before dawn?
• 06/05/17 James Comey is jumping into the fire by testifying to Congress about Trump. What's in it for him?
• 05/18/17 About to quit Congress, Chaffetz suddenly becomes face of its Trump investigation
• 05/17/17 President Trump's defenders on Capitol Hill are wavering
• 05/10/17 Senate Republicans hold the key to what happens next with Trump and Russia. Here's an early rundown of where GOP senators stand
• 03/27/17 Trump's First 100 Days: What's next for Trump and Congress
• 03/27/17 Congressman resigns from Freedom Caucus after health-care drama
• 03/22/17 4 takeaways from Neil Gorsuch's highly politicized confirmation hearing
• 03/08/17 The three GOP factions that could doom Republicans' Obamacare replacement bill
• 02/01/17 DEM-olition: How party's antics may leave them losers, again
• 01/16/17 10 times Donald Trump's Cabinet picks directly disputed him
• 01/05/17 Senate Dems want to block Trump's Supreme Court pick. That may be riskier than they think
• 12/23/16 7 hugely important races for governor that GOPers must guard to cement their almost complete control of America
• 11/28/16 Why down-ballot Dems could be in the minority for years to come
• 11/21/16 10 things to know about Sen. Jeff Sessions, Donald Trump's pick for attorney general
• 11/09/16 Democrats are now basically extinct in the South
• 11/07/16 GOP appears poised to hang on to a near-record-high
• 09/29/16 In the 9th inning, Congress ends Obama's perfect veto game
• 09/27/16 Dems are still not favored to take back the House
• 09/09/16 A shortlist of economic issues in which a lib wouldn't feel guilty voting for Trump
• 07/28/16 Terry McAuliffe's TPP gaffe reinforces several narratives Hillary's been trying to dismiss
• 06/15/16 3 things Congress could do in response to the massacre in Orlando (And none involve guns)
• 06/14/16 Marco Rubio sure sounds like he might be prepared to run for reelection, after all
• 06/10/16 History suggests Donald Trump's big, beautiful border wall may not be so outlandish
• 05/26/16 What Bernie Sanders' new endorsements say about his future plans
• 05/11/16 Ted Cruz built a brand on being the most hated man in Washington. Now what?
• 04/20/16 Has Trump finally realized he can't just bulldoze his way to the White House?
• 03/28/16 Do House Dems have a shot at the majority this year?
• 03/14/16 Undersold: Trump would honor Obama's foreign deals (but make them better, of course)
• 02/22/16 The GOP's Supreme Court strategy is dicey. But its potential payoff is massive
• 02/11/16 Who is John Kasich? Five things you should know --- including how to pronounce 'Kasich'
• 12/21/15 Words of caution to temper Ryan's optimism