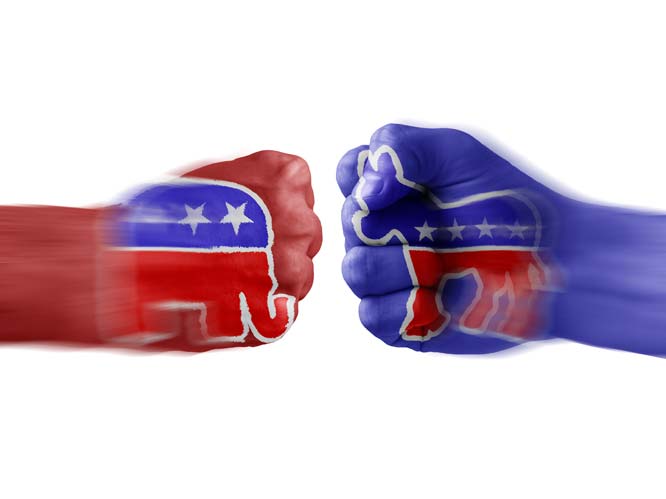 The nation's Founding Fathers had numerous brilliant, innovative ideas for designing our new form of self-government, many of which endure to this day. One of them was a thorough disdain for coarse political parties.

However, the rejection of parties did not last long. Humans, like wolves and whales, havean apparently innate need to inhabit packs, pods and political groupings. So, here we are about a quarter-millennium later stuck with two major political parties, neither of which is functioning very well.

Both U.S. political parties have gone through identity crises and internal turmoil before, though rarely at the same time. The Democratic and Republican parties, the world's second and third oldest parties, have been amazingly resilient — yes, and loud — political organisms, adaptive and roughly balancing each other out.

Like a playground teeter-totter, when one was down, the other was up and ruled as the dominant political grouping until the other provided voters with a more attractive alternative. Think of the Democrats' 20-year White House rule under Franklin Roosevelt and Harry Truman, which ended in 1953 when Gen. Dwight Eisenhower led Republicans out of the political wilderness.

But what happens when both parties are down? The system is out of balance.

We're living through that difficult experience right now with partisans at both ends of the spectrum happy in their fervent bitterness. And the rest of us feeling a mounting, disturbing sense of unease and disquiet.

Nothing is set in concrete in such turbulent times. But as spring starts its slow northward creep across the country, the outlook is for prolonged political paralysis. If historical midterm election patterns stick, Democrats will re-capture at least the House of Representatives, where all financial legislation originates.


The historical average first midterm loss for a president's party is 30 Houseseats. Turnover of just two dozen would give returned Speaker Nancy Pelosi and her minions control of all House committees with their broad investigative and subpoena powers. Can you say Donald Trump impeachment?

That would return Washington's power balance to the partisan gridlock that modern-day voters seem to prefer, one party holding the White House, the other controlling one or both chambers of Congress.

But either way neither party has shown an ability to get much done. While Democrats pine for Barack Obama to play a key role, he's shown more interest in the show business that produced his successor. Hillary Clinton is "only" 70, but she's on an Asian book tour falling down almost daily and explaining how American women voted for Trump as ordered by their husbands.

Democrats' political bench is thin and wobbly. For lack of anyone else, it's currently led by Pelosi, who turns 78 next week. Her co-leaders are Jim Clyburn, who also turns 78 this year, and Steny Hoyer, who's already there. Joe Biden is standing by. But he's 75 and if he had a job, he'd be fired these days over his penchant for pawing women in public.

Ideologically, the party has drifted far left and has become mired in anti-Trumpism with no fresh alternatives. Members routinely split over issues like banking reform. Last week's narrow House win in Pennsylvania opened a new rift as the Democratic victor is a moderate who opposes not Trump but Pelosi.

Republicans, too, are actually leaderless. A lifelong Democrat donor, Trump took on the GOP label out of convenience in 2015. His judicial picks and tax cuts please conservatives, not so much his tariff ideas. Or his managerial mayhem.

Trump is basically leading his own Party of Trump, based on his own ego and millions of disaffected Americans sick of the ineffectiveness and unresponsiveness of both two-faced parties. The lack of substantial legislative results last year revealed both deep rifts within the me-first GOP congressional factions and Trump's inability or unwillingness to act as a real party leader.

Hard to blame wary GOP members on the Hill given their president's mercurial temperament, political double-crosses and Twitter attacks on his own would-be allies.

When Trump does venture out to campaign for party picks in the Alabama Senate and Pennsylvania House races, for instance — staunchly Republican voters ignore his urgings and elect Democrats. Another ominous November sign for the GOP.

Third parties in the United States have erupted over the decades around hot passing issues such as the Vietnam War or charismatic figures. Think Teddy Roosevelt in 1912 and Ross Perot in 1992.

The U.S. has never had a third-party presidency. Their pre-election purpose has been as political safety valves that serve to split one of the two parties, launching the other to victory.

The unprecedented thing this time is we're currently experiencing, in effect, a third-party presidency that's broken the teeter-totter and split both parties. The journey and long-term outcome are unknown.