Trump can learn about North Korea talks from Albright 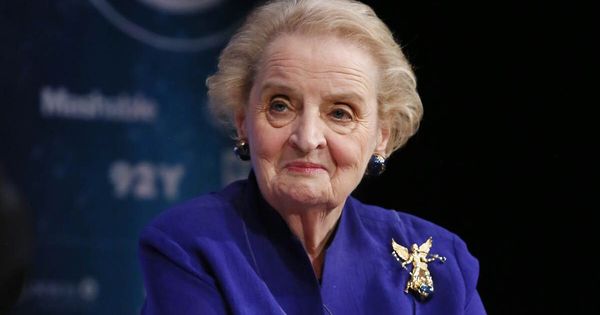 The next few episodes of the Donald Trump show should be riveting. This week, the South Korean national security adviser announced North Korea's dictator Kim Jong Un invited Trump to meet to negotiate his nuclear weapons. The "dotard" may face off against "little rocket man" face-to-face. Stay tuned.

If indeed the unprecedented meeting comes to pass, it will be historic. That does not mean though that it will be wise. And unless Trump comes to these talks to negotiate the terms of Kim Jong-Un's surrender and abdication, the cost America will pay in legitimizing the warden of the Korean prison state will outweigh whatever empty promises are offered. But given that Trump is a man who adores distraction and adulation, we should brace ourselves for the upcoming spectacle.

So Trump should prepare. This does not mean late-night wonk sessions where Trump masters the details of North Korean medium-range missiles and past diplomatic agreements. Rather, the president should get in touch with the last senior American official to travel to Pyongyang, Madeleine Albright, to learn from her mistakes.

I was on that trip with Albright in the last week of October 2000. It was a low moment for American diplomacy, where a secretary of state, whose family fled the Iron Curtain, flattered an imitator of Josef Stalin. She ended the visit by handing over a basketball signed by Michael Jordan. Her delegation enjoyed elaborate multi-course banquets with North Korean officials who only a few years earlier had presided over a famine.

As secretary of state for President Bill Clinton, Albright traveled to Pyongyang in a last-ditch effort for an administration that had watched its main foreign policy priority -- a peace deal between Israel and the Palestinians -- unravel. This was a chance in the final months of the Clinton presidency for a legacy.

Needless to say, it didn't work. Albright had hoped to finish the work the Clinton administration had begun in 1994 with an interim agreement on North Korea's nuclear program, by getting a follow-on pact on missiles. The U.S. offered security guarantees, fuel and food shipments, help on building peaceful reactors. The North Koreans kept developing and testing their missiles and, U.S. intelligence agencies would later learn, built a uranium enrichment facility in secret.

You wouldn't have known this from the pageantry in Pyongyang back in 2000. We were all crowded into busses for a special performance at May Day stadium. In a near-perfect metaphor for life in a totalitarian state, hundreds of North Koreans gathered on the field, and in military precision flipped picture cards to create a series of tableaus depicting North Korea's founding hagiography. At one moment, a tableau depicted the 1998 launch of the Tae-Po-dong missile. Albright wrote in her memoir the "dear leader," Kim Jong Il (the father of Un) turned to her in this moment and said this "that was our first missile launch and our last." He lied.

My most vivid memory of the trip was during a routine grip and grin for Albright. She visited a school for students, something she did on many of her trips. At the event the children sang a song for their distinguished guest. My minder translated the lyrics to mean roughly that the children hoped to grow up and fight against the wicked imperialists who threaten their happy land.


There is an argument that says Albright's visit in the end was worth it. Even if there was a slim chance North Korea would agree to more limits on nuclear weapons, a confident world power like America could absorb some of the humiliation that attended Albright's flattering of a monster. Why not take every chance to make the world safer?

That however misses a broader point. Eighteen years later, we don't remember Albright for her failed trip to Pyongyang. Her legacy was made in her tough fight with cautious European leaders to help drive Serbia's dictator, Slobodon Milosevic, from power. In the end Milosevic fell because Serbian citizens would not allow him to steal the 2000 election that U.S. pressure in part forced him to hold. But Albright's tough diplomacy, her pressing for a war-crimes tribunal against Milosevic while he was still in power, helped set the stage for his exit.

There is a lesson for Trump in all of this. If he is looking for a legacy himself, he shouldn't waste his time negotiating with the dictator of North Korea. Who honestly believes Kim has any intention of abandoning his nuclear weapons? He is buying time.

Instead, Trump could go back to his instincts from the State of the Union speech this year when he told the story of dissident Ji Seong Ho's heroic escape from Kim's gulags. Trump said Ji's journey to freedom was "a testament to the yearning of every human soul to live in freedom." Helping North Koreans achieve this basic human yearning is much harder than meeting with their tyrant. It's also more promising -- and less nauseating.