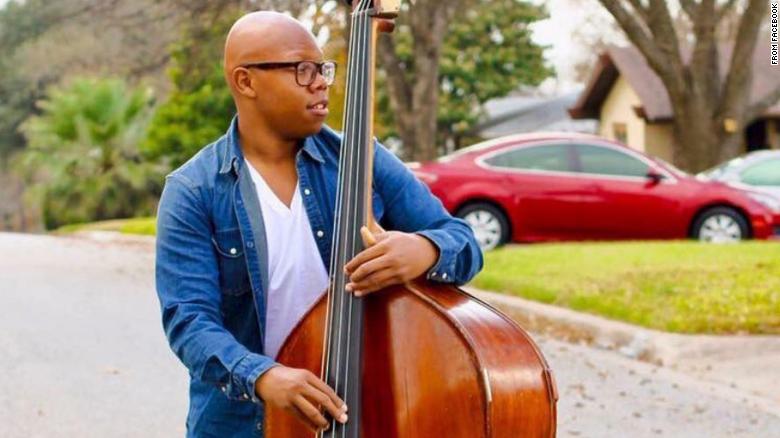 Draylen Mason, the 17-year-old musician killed by the bomber, had a light about him "like a Rembrandt painting."

It was late afternoon when I heard that coming over the TV as I was walking through the kitchen. And I had to stop and listen, transfixed.

"Every once in a while, you see a kid that just has this spark," said , Draylen's former conductor at the .

"When Draylen appeared, in some sense he was incandescent, like a Rembrandt painting where the light sort of comes out of him," Dick said. "He's in the room and his little spirit was there, along with the technical proficiency he had."

Someone on Twitter posted a video of Draylen Mason playing the double bass that he would have played at the , if the bomber had not murdered him.

You could see that light on the young man. I'm no music critic but I could see it easily, upon his face, his fingers, on the hunch of his shoulders in his gray suit as he leaned over, almost off his stool, to play his giant stringed instrument.

National Public Radio reported that when Draylen was first learning to play the double bass, his teachers immediately noticed his talent.

"(Another teacher) came to me ... saying, 'Wow, this kid is incredible,'" said , the CEO of Austin Soundwaves, a music education program.

"He had just started bass or maybe he had been playing a little bit already. (The other teacher said,) 'He can play everything by ear; he's just so hungry to learn.'"

It's clear in the video that Draylen, the talented apprentice with all his life in front of him, was doing the thing he loved. He was chasing the magic in it, with that light upon him.

But now the glare of the news is on the killer, bomber , the 23-year-old who terrorized the community with a series of bombs. He killed two people, injured four others and left a confession on his phone before he blew himself up in a car just before his arrest.

It has been reported that in his confession, Conditt, too, was consumed by technique, explaining how he built his bombs, the materials he used.

And with a confession but still without a clear motive, journalists were trying to put Conditt in some kind of context. opted for a seemingly neutral but rather malevolent Rockwellian sketch of the bomber:

A troubled Christian. Home-schooled. Bible study on Sundays. His mother asking a friend for prayers. And the American flag flying outside the family home.

Yet whatever the killer's motive turns out to be, whether racism or some other kind of outwardly directed hate or internalized self-loathing, what happens to the victims in this kind of story is always depressingly the same.

The how and why and who of what they had been as individuals are often blotted out by the harsh light on the killer. And his motives become weaponized by our politics, and we use these weapons on social media in our endless wars of words.

But Draylen is past all that. It can't touch him now. His language was music.

And there was that light coming from him, from within, that light that the conductor recognized as the light from a Rembrandt painting.

Artists are students of light, the way dancers are students of the negative spaces between moving forms. And some writers focus not only on the meaning of words but their sound and tonal qualities to drive an internal rhythm in their readers.

Some of this is pure craft, some of it is cheap trickery, but all of it is imposed through technique learned by practice alone.

And Rembrandt, the Dutch master and greatest portrait painter of all the ages, imposed his technique of light upon his subjects. By doing so, he imposed control upon his world.

He did this in part by shining light onto a part of the human face, a spot under the eye; or onto the folds of a dress, the side of a neck, the hard edge of a helmet. He played with shadow and light so wondrously that today, portrait photographers call it Rembrandt lighting.

It is something that all babies are born with. And it is something that the world often takes away from many of us when it breaks us. Or perhaps some of us just give it up, involuntarily, sadly, part of a compact made for emotional survival.

We make compromises, we stop seeing, we withdraw our antennae, seek our safe space and hide our emotions behind some pose that ultimately becomes real and calcified.

There is a courageous, childlike quality among great artists, a playfulness, and when we see what they've done they awaken that wonder inside of us.

Talent? It is not enough, but it is recognized. The wolf recognizes another wolf in a field full of dogs.

Draylen Mason had that joy, that bravery, that confidence that made that light that he's remembered for today.