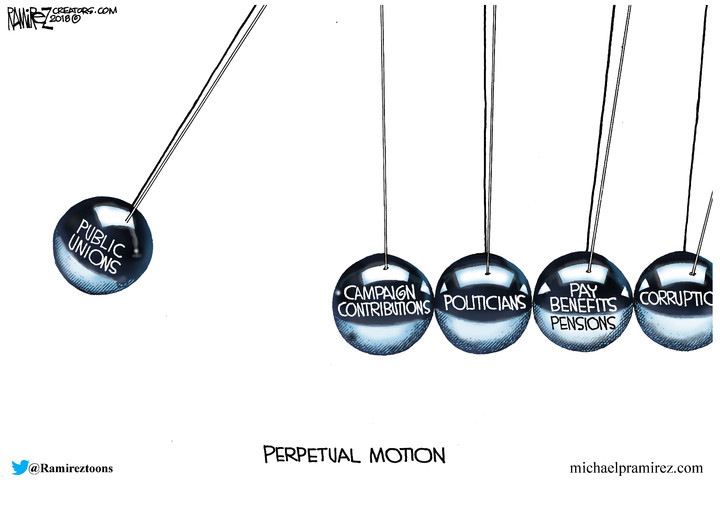 Can you be forced to give up money to someone else, who'll then use your cash to push a political agenda with which you disagree?

It is technically a First Amendment issue in the case of Janus v. American Federation of State, County, and Municipal Employees that is being decided by the Supreme Court.

And it may just be the most important political story in America, about Democratic Party bosses in blue states who for decades have used public employee unions to maintain their power.

Politics is all about who gets what, when and how much. But it's also about who pays for the generous public pension and health care plans for public workers in the 22 electoral vote-rich blue states, like and .

Politics is also about who gets tired of paying, like all those blue state economic refugees.

Taxpayers are being squeezed on all sides to pay more to keep those political bosses in power, by funding the public-sector unions that push the big votes in the blue states in exchange for retirement and other benefits that voters like Mary and Joe can only dream about.

A decision in Janus is expected in June. The justices will be deciding if public sector unions violate the First Amendment rights of workers who refuse to join those unions.

The Janus case was first brought by Gov. .

Rauner has lately been condemned by conservatives -- led by his primary opponent, state Rep. of -- over his shift to the left on other policy matters. But Rauner is the one who originally pushed this issue to fight Democratic bosses over their control of blue states like .

The governor has since been severed from the case because he was not a union member, but another plaintiff was installed: , a state employee who opposed having $45 per month in union fees deducted from his paycheck.

Former Obama administration official , now with , said by abolishing the fees, the court would begin an unraveling process that will weaken union power and "could undermine political operations that assist the Democratic Party."

The progressive infrastructure in this country, from think tanks to advocacy organizations ... will crumble," she said.

She's exaggerating. Advocacy won't crumble. But what will be threatened is the symbiotic relationship between Democratic bosses who promise ever-increasing retirement and other benefits to public unions in exchange for union support at the polls.

Taxpayers, that's who. And the ones with lousy retirement benefits can't afford it anymore.

To illustrate, consider research done by of wirepoints.com, a conservative but independent economics think tank.

"The public sector unions love to say that pensions are underfunded -- that taxpayers never put in enough. It's their way of guilting Illinoisans into paying ever-higher taxes," Dabrowski told me. "But the reality is pension benefits have been grossly over-promised. Since 1987, total pension benefits owed to state workers and retirees have grown 1,061 percent. That's eight times more than household incomes (127 percent) and nearly 10 times more than inflation (111 percent) over the same period."

Of course, all this has a cost, for taxpayers, for states like drowning in red ink, and for the public worker union members themselves, who worry that once the political Ponzi scheme collapses, they'll be hurt the most.

The politicians will have retired with their own six-figure public pensions, the union bosses will move along, many taxpayers will have fled, and public workers will be holding the empty bag.

There are so many good people among them, public workers who work hard for their pay and know the system is decaying, and they, too, are being squeezed.

Democratic politicians, of course, join the unions and disagree, saying Janus isn't at all about free speech.

"This is a case where there are a small group of very well-funded right-wing extremists that want to eliminate unions throughout this country," insisted departing Democratic Attorney General .

But her father is Democratic . She's the boss' daughter.

Speaker was first elected to the speakership in 1983. He is the longest-serving state House speaker in American history.

Like other bosses in blue states, he's been adept at promising benefits to the public unions, which back his candidates at the polls.

And has leveraged this political power to make a whopping personal fortune in his private property tax reduction legal practice.

At bottom, all this is a question of political morality; the pushing higher taxes, asking those who can't afford it to subsidize public servants who have much better retirement plans.

I figure you won't find this on the "most popular" list on your local news site. It lacks the potential for juvenile snark. won't care. And it's not a clickbait story about what Ivanka wears.

Politics is always about who gets what. And the boss always gets what he wants.