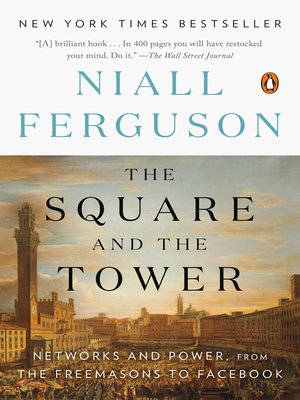 PALO ALTO, Calif. - When historian Niall Ferguson moved from Harvard to Stanford two years ago, he was struck by Silicon Valley's indifference to history. The hubris he saw reminded him of what he encountered on Wall Street as he researched a book about the history of banking during the years before the financial crisis. He became convinced the technology sector was careening toward its own crisis and decided to write about it.

The crisis has finally arrived, thanks to Cambridge Analytica, conveniently timed to coincide with the publication of Ferguson's new book on the history of social networks, from the Freemasons to Facebook. "The Square and the Tower" is a cautionary tale that challenges the conventional wisdom that growing interconnectedness is inherently good for society.

"Our networked world is fundamentally vulnerable, and two-factor authentication won't save us," Ferguson said at the Hoover Institution, where he is a senior fellow.

Since President Donald Trump's victory, much has been written about parallels between the present and the rise of authoritarian leaders in the 1930s. Ferguson thinks that's lazy analysis. For most of the 20th century, communications systems were amenable to central control. This was a fluke of the Industrial Revolution, which produced telegraphs and then telephones. These technologies had an architecture that allowed whoever controlled the hub to dominate the spokes, which led to more hierarchical power structures.

To understand the current era, Ferguson believes we need to look more at what happened after Johannes Gutenberg developed the printing press. Like the web, the use of these presses was difficult to centrally control.

"At the beginning of the Reformation 501 years ago, Martin Luther thought naively that if everybody could read the Bible in the vernacular, they'd have a direct relationship with G od, it would create 'the priesthood of all believers' and everything would be awesome," Ferguson said.

"We've said the same things about the internet," he added. "We think that's obviously a good idea. Except it's not obviously a good idea, any more than it was in the 16th century. Because what the Europeans had was not 'the priesthood of all believers.' They had 130 years of escalating religious conflict, culminating in the Thirty Years War - one of the most destructive conflicts ever."

The more he studies that period, the more echoes Ferguson sees in the 21st century. "What one can see in the 16th and 17th centuries is polarization, fake news-type stories, the world getting smaller and therefore contagion is capable of spreading much faster," Ferguson said. "These big shifts in network structure led to revolutions against hierarchical institutions."

Ferguson points to recent studies showing that fake news can spread faster and farther than real news when it's especially sensational. "The crazy stuff is more likely to go viral because we're kind of interested in crazy stuff, but this is not surprising historically," he said. "The idea that witches live amongst us and should be burned went as viral as anything that Martin Luther said ... Indeed, it turned out that witch burning was more likely to happen in places where there were more printing presses."


In a sobering 90-minute conversation, the author said he's driven to sleeplessness when he thinks about how some of the dynamics on social media will play out in the future. "I'm much more worried than a non-historian by what I see because history tells me that the polarization process keeps going, and it doesn't just stop at verbal violence because at a certain point that's not satisfying," Ferguson said.

Enter Facebook. Mark Zuckerberg is worth around $64 billion as a 33-year-old because of his brilliance at creating an addictive social network that capitalized on the human desire for connection. The site was already embattled for allowing the Kremlin to use its platform to sow domestic discord. The Russians were literally buying political ads to target American voters with rubles. Now Zuckerberg is under growing scrutiny for the firm's failure to safeguard data in the wake of damning whistleblower revelations about Cambridge Analytica, a voter profiling firm which harvested the personal information of as many as 50 million users and earned $6 million from Trump's 2016 campaign.

The Federal Trade Commission is investigating whether Facebook broke the law or violated a 2011 settlement agreement. A bipartisan chorus in Congress is demanding that Zuckerberg testify under oath. His lobbyists are negotiating the details of an appearance. Recognizing the political risk, Facebook executives have even begun saying publicly that they're receptive to being more heavily regulated.

"I don't think they have thought deeply at all about the historical significance of their predicament, and I blame Mark Zuckerberg for dropping out of Harvard before he took any of my classes," Ferguson quipped. "If he had taken my course in western civilization, he'd know that he's become a strange amalgam of John D. Rockefeller, Andrew Carnegie and William Randolph Hearst all at once. When you look back on the experience of these figures, what's the common characteristic? They went through a phase of deep unpopularity."

Ferguson, who like Carnegie is a native of Scotland, believes that the American government must move aggressively to rein in the power of companies like Facebook. "If we don't act, the next phase of the process will be even uglier than the current Cambridge Analytica phase - which is the tip of the iceberg," he said. "Think of how many other people have downloaded the data. The window was open for years."

He believes Facebook should be treated under the law more like a content publisher than a technology company. Amending the Telecommunications Act of 1996 could increase their liability and make them more accountable for damaging information trafficked on their platforms.

"It is an untenable state of affairs that a few private companies know more about the citizens of a country than the citizens themselves, much less the government," said Ferguson. "And it is untenable that the companies concerned are ... so easily instrumentalized by hostile foreign governments that as many people saw Russian-originated content in 2016 as voted in the presidential election. Regardless of where you are on the political spectrum, you cannot possibly think this is OK."

Despite all the attention paid to the ongoing Russia probes, Ferguson thinks media coverage of the midterms needs to emphasize how vulnerable the internet remains to manipulation by the forces of darkness.

"It's as if people who work professionally in politics just want to pretend that it's still pre-2008, whereas the entire system of politics has completely changed," he said. "Facebook advertising is the most powerful tool in politics. I don't think we're doing nearly enough to avoid another legitimacy crisis around this."