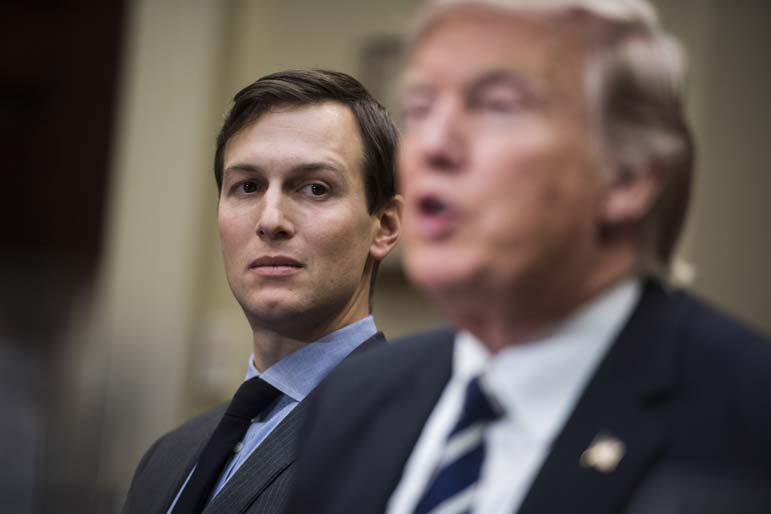 It was easy to miss it, what with Secretary of State Rex Tillerson being fired and President Donald Trump fueling rumors of more personnel shake-ups. But last week Jared Kushner, presidential adviser and son-in-law, presided over a highly unusual White House conference on the humanitarian crisis in Gaza.

Who participated was noteworthy: Israel was there, alongside Arab states with which it does not have diplomatic relations, such as Bahrain, Qatar and Saudi Arabia. Who didn't participate was noteworthy too: the Palestinians, who have been boycotting Trump since his announcement that the U.S. will have an embassy in Jerusalem.

The meaning of the conference can only be deciphered in relation to the Kushner-led peace effort. That long-shot effort is alive, notwithstanding Kushner's defeat by chief of staff John Kelly in the White House palace intrigue over security clearance.

Last week's conference embodied the success of the Kushner team's basic strategy -- and the challenge of making it work in the face of setbacks like Trump's Jerusalem announcement.

In essence, Kushner has approached the Israel-Palestine question by treating it as an adjunct to a broader regional realignment of Sunni states plus Israel against Shiite Iran.

His laser-like focus has been on Saudi Arabia, which is signaling that it's prepared to develop warm and even official ties to Israel if only peace can be established. The basic idea is for the Saudis and other Gulf states to pressure the Palestinians to the table. Then Trump and Kushner will deliver the Israelis -- or at least try.

Other negotiators in the past have sought to regionalize the Israeli-Palestinian conflict. Kushner has gotten further than any of his predecessors on this front.

His strategy has been to form an extremely close relationship with Saudi Crown Prince Mohammed bin Salman, who is expected to become king in the near future when his father abdicates.

This relationship is a two-way street. MBS, as the Saudi prince is invariably called outside the country, is in the process of attempting a high-risk transformation of the Saudi monarchy, from a power-sharing arrangement among siblings to centralized kingship dominated by one man. For that, MBS needs unprecedented personal backing from the White House. And Kushner and Trump have delivered exactly that. Witness their Oval Office meeting Tuesday.

Meanwhile, in return, Kushner expects MBS to play ball on an Israel-Palestine deal. So far, that's exactly what crown prince is doing. He's also made sure Egypt is on board, not to mention the Gulf principalities over which Saudi Arabia wields such influence.

The evidence for MBS's cooperation has so far come primarily from Palestinian reports that President Mahmoud Abbas was told in no uncertain terms by Saudi Arabia that the time had come to take a deal.

The whole point of the exercise was therefore to show the Palestinians that if they don't get with the program, negotiations between Arab states and Israel could go on without them. That's a plausible form of leverage. The Palestinians' greatest nightmare is that Arab states might abandon them altogether and normalize relations with Israel without a peace deal.

From this perspective, the conference is a fairly big deal, at least as a signal of how alliances are shaking out and how friendless the Palestinians really are at the moment.

A deal, however, isn't imminent, or even on the horizon. In the end, the Arab states can't actually sign a peace agreement without a Palestinian state signing it, too. They would lose too much legitimacy at home, thus losing ground to Iran, which the very enemy they are seeking to marginalize by allying with Israel in the first place.

Abbas knows this, which is why he is taking the risky tack of just saying no to the Saudi crown prince and the whole idea of a Trump peace deal. He's worried that any deal the Israelis would offer under Trump's aegis would be a deal he wouldn't want to accept, or couldn't accept without a Hamas takeover as the sure consequence.

Abbas's rational gamble is that the deal will die of its own accord -- for example, if Israeli Prime Minister Benjamin Netanyahu is indicted and/or resigns as a result of corruption allegations against him, or if his coalition collapses for other reasons.

To change Abbas's calculus, Kushner needs to sweeten the pot for the Palestinians. An offer you can't refuse isn't all about coercion -- it also requires inducement. That means not only vast expenditures in Palestine, but also contiguous, livable borders within the West Bank, a capital in East Jerusalem, and land swaps to enable the Palestinians to save face and say they are getting a better deal than the one Palestinian leader Yasser Arafat rejected at Camp David.

If this is a nonstarter for Netanyahu in his politically and ethically weakened condition, then all Kushner's successes with MBS won't be enough to deliver a deal. The aftermath may include some more informal contacts between Israel and Saudi Arabia, to the strategic benefit of each -- but no long-term alliance against Iran, and no regional realignment.

That remains by far the most likely outcome. But it's not (yet) inevitable. Despite skepticism among area experts that he lacks the tools to do the job, Kushner is still in the game.