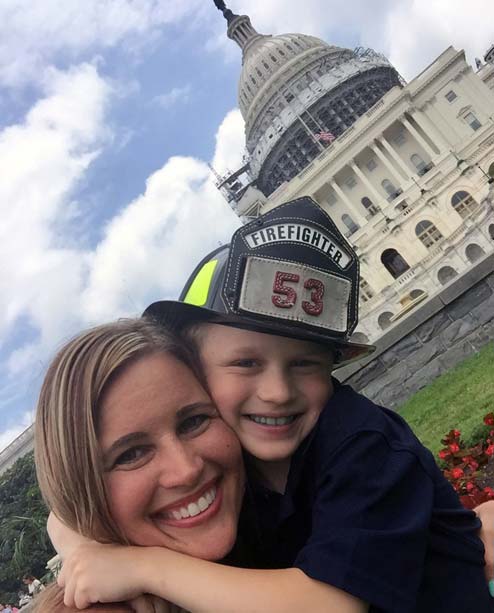 Laura and Jordan McLinn during a visit to D.C., for a right-to-try rally in June.

WASHINGTON - "Where's Jordan?" asked Vice President Mike Pence as he walked into the White House meeting of terminally ill patients and their families. All eyes shifted, and Pence made a beeline for a 7-year-old boy from Indianapolis with a broad grin.

Back home, when Pence was Indiana's governor, Jordan McLinn and his battle with Duchenne muscular dystrophy had helped inspire passage of a state "right-to-try" law intended to give the desperately ill access to medications not yet approved by the Food and Drug Administration. Fast forward to Washington, D.C., where Pence is now in a position to encourage national right-to-try legislation.

"We're going to get this done," he assured Jordan's mother, Laura McLinn, and the other families gathered last month.

Thirty-three states have passed such laws, which ostensibly allow patients to take experimental medicines outside of clinical trials and without FDA oversight as long as the therapies have undergone preliminary safety testing. Many of the remaining states are considering such bills or are expected to do so.

And now, for the first time, federal legislation is gaining traction.

Congressional supporters may try to attach a measure - drafted with a unique and highly controversial restriction on the FDA - to the agency's must-pass funding bill this year. The anti-regulatory mood dominating Washington is boosting these efforts.

President Donald Trump recently weighed in, accusing the agency of denying drugs to patients with terminal conditions: "The FDA says, 'We can't have this drug used on the patient' . . . but the patient is not going to live more than four weeks!"

The right-to-try campaign is the ultimate in patient empowerment, according to its champion, the Goldwater Institute, a libertarian nonprofit organization that wrote the model legislation that has become the foundation of most statutes. "It represents a unanimous voice from the states and the people saying that patients ought to be able to make these life-or-death decisions to save their own lives," said the institute's executive vice president, Christina Sandefur.

But the increased momentum is raising alarms, with opponents saying that such laws largely offer false hope. That's because many drug companies are reluctant to provide medications outside of clinical trials - and why critics insist that the FDA is not the problem. In 2016, they note, the agency revamped its "expanded access" program to speed unapproved drugs to patients who have no alternatives and can't get into clinical trials. The FDA approves almost all such requests, the data shows.

"A lot of this is smoke and mirrors for some other agenda," said Andrew McFadyen, executive director of the Toronto-based Isaac Foundation, which assists U.S. and Canadian patients seeking access to medications. "A weaker FDA is what they are after."

The legislation pushed by Sen. Ron Johnson, R-Wis., and Rep. Andy Biggs, R-Ariz., would forbid the federal government from interfering with the state laws and would exempt doctors and drug companies from liability for prescribing or providing experimental drugs. It also would limit the FDA in an unprecedented way: If a patient were injured or killed by an unapproved treatment under a right-to-try law, agency officials would not be allowed to use the information to delay or block approval of the treatment.

Supporters say such a provision is crucial to spurring drug companies to make experimental drugs available to terminally ill patients, without worrying that an "adverse event" could prompt the agency to stop a trial conducted as part of the drug-approval process.

The notion that the FDA would be barred from considering all data has consumer advocates, ethicists and drug-safety experts in an uproar. If a person is harmed by an experimental drug, they say, that has implications for anybody who might eventually take the medicine.

"The idea that you blind the FDA to any negative side effects in using an investigational agent is just nonsensical," said Alison Bateman-House, a bioethicist at the New York University School of Medicine.

FDA Associate Commissioner Peter Lurie told the Senate Homeland Security and Governmental Affairs Committee at a hearing in September that the provision would "be detrimental and raise significant ethical issues." With 11,000 expanded-access requests over the past decade, he said, only twice did the agency temporarily halt clinical trials because of "adverse events." Both times, drug development resumed after the problems were resolved.

Right-to-try opponents are also skeptical that constraining the FDA would be enough to induce pharmaceutical companies to make unapproved drugs available. Manufacturers, they say, don't like to provide experimental therapies in part because they don't want to be besieged by desperate patients but also because of the potential cost involved.

The drug companies' main lobbying group, the Pharmaceutical Research and Manufacturers of America, is noticeably cool to right to try, saying that "any legislation should protect the integrity of clinical trials and the FDA oversight of expanded access to maintain the best interests of patients." Those interests, others say, include protecting terminally ill patients from spurious therapies.

Right-to-try supporters reject that latter point as paternalistic. Even if a federal law does not end up helping patients, it won't hurt them either, they insist. "We're asking for a very special carve-out for a very small exception that doesn't cost us any money," said Matt Bellina, a Navy veteran with amyotrophic lateral sclerosis, or Lou Gehrig's disease, who testified at last fall's hearing. "I'm not asking to build a wall. I'm asking you to make an exception for people who really need it."

He added, "At some point in the near future, I'm going to suffocate under the weight of my chest, so what difference does it make if we have a side effect?"

Traditionally, these patients have received unapproved treatments by enrolling in a clinical trial or, if that is not possible, by going through the FDA's expanded-access program. The program allows the agency to authorize use of an unapproved therapy if it determines that the drug's potential benefit justifies the treatment risk.

The FDA concedes that the program's requirements once were too complicated and time-consuming; its application form called for 26 types of information and seven attachments, Lurie wrote in a blog post. By contrast, officials say, the streamlined process takes doctors just 45 minutes. Last year, 99 percent of the almost 1,800 requests were approved, many in just hours or days.

Still, right-to-try supporters argue that the FDA should be getting far more requests and that the low numbers suggest many doctors still find the process too daunting.

Yet state right-to-try laws, with their minimal requirements, aren't being used much. There are almost no reports of doctors turning to the laws on patients' behalf. The one exception: Houston radiologist Ebrahim Delpassand, who treats patients who have lethal neuroendocrine tumors. The Goldwater Institute frequently points to him as an example of a physician utilizing right to try.

Delpassand said Friday that he turned to the Texas right-to-try law in 2015, not long after its passage, to increase the number of patients he was treating using an experimental radioisotope therapy. The FDA had earlier denied his request to add patients. Officials declined to comment, citing confidentiality rules.

In Indiana, Jordan McLinn was 3 years old when he was diagnosed with Duchenne muscular dystrophy. "We know what happens," his mother said recently. "You lose muscle function, and then you die."

A couple of years later, a friend pointed out a story in the local newspaper about a state legislative hearing on a right-to-try bill. Jordan testified and quickly became the public face of the legislation. When Pence signed the bill into law, the boy was at his side.

Laura McLinn initially hoped that the measure would help her son get an experimental therapy, but the manufacturer declined to make it available. Jordan is now participating in a clinical trial run by a different company.

Three infusions in, Jordan's mother thinks that he is much improved. On a family vacation, he was full of energy and raced past his parents to the beach. "That has not happened in two years," she said.

She plans to keep working on right to try, though it never benefited Jordan. "If even just one person finds the one doctor and one drug company to help," she said, "that's important to my son."