Devin Nunes explains what he did at the White House 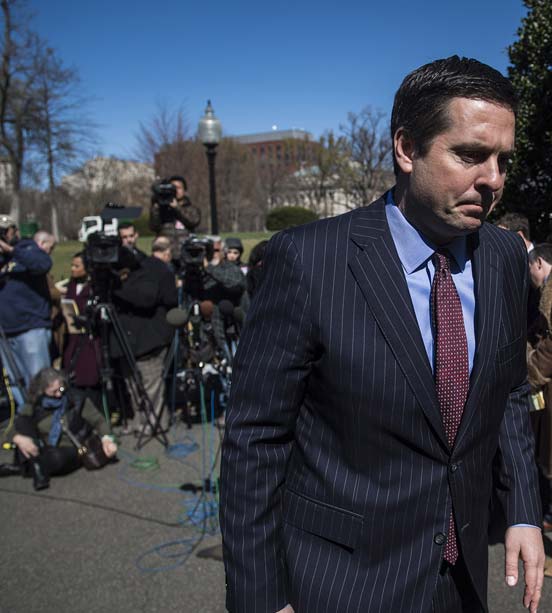 For the last few days, much of Washington has been obsessed with what Rep. Devin Nunes did last Tuesday evening. That was the night before Nunes, chairman of the House Intelligence Committee, made the explosive allegation that he had viewed dozens of intelligence reports, obtained through government eavesdropping that inappropriately included details about the Trump transition team.

According to a Daily Beast report later over the weekend, Nunes went off the grid that night to meet a source and view dozens of intelligence reports, including accounts of meetings involving President Donald Trump's advisers.

Then it gets weirder. CNN is now reporting that Nunes had in fact slipped off to the White House grounds last Tuesday to view the documents. And then on Wednesday, after briefing reporters on what he had found in those intelligence reports, he went back to the White House to inform the president.

On the surface, none of this looks good for Nunes, who is in charge of his committee's bipartisan investigation into all things Trump and Russia. Why would Nunes need to brief the president on documents he viewed at a facility on White House grounds?

In an interview Monday, Nunes told me that he ended up meeting his source on the White House grounds because it was the most convenient secure location with a computer connected to the system that included the reports, which are only distributed within the executive branch. "We don't have networked access to these kinds of reports in Congress," Nunes said. He added that his source was not a White House staffer and was an intelligence official.

Nunes, it should be said, has a history of cultivating independent sources inside the intelligence community. He made contact, for example, with the U.S. intelligence contractors who ended up saving most of the Americans stuck in the Benghazi outpost when it was attacked on Sept. 11, 2012. More recently, Nunes has reached out to his network of whistleblowers to learn about pressure inside the military's Central Command on analysts to write positive reports on the U.S. campaign against the Islamic State.

In this case, Nunes had been hearing for more than a month about intelligence reports that included details on the Trump transition team, and had been trying to view them himself. He told me that when he finally saw the documents last Tuesday evening, he made sure to copy down their identifying numbers so he could request access to them formally for the rest of the committee.

So let's look at the bigger picture.

Trump has claimed that what Nunes found out vindicates his tweets from more than three weeks ago accusing Barack Obama of illegally tapping his wires at Trump Tower. Nunes has repeatedly said this claim is literally false.

Yet Nunes has also said the reports he viewed included information that should not have been widely distributed inside the government.

In some cases, he said the names of Trump advisers caught up incidentally in the eavesdropping were not expunged from surveillance reports as those of U.S. persons should have been.

Most important, Nunes told me these reports were sent to the Obama White House among other executive branch agencies.

Nunes until now had only said the reports he viewed were widely distributed inside the government.

"The reports included details about the Trump transition, meetings of Trump and senior advisers, they were distributed throughout the intelligence community and to the White House," Nunes said. "In some cases, there was additional unmasking of Trump transition team officials."

This is suggestive, though not yet proof, that White House officials privy to the Russia investigation wanted keep tabs on Trump and his advisers in the period after the election and before his inauguration.

It also fits together with other facts in this story as well.

For example, on March 1, the New York Times reported that Obama White House officials sought to preserve intelligence in the final days and weeks of his presidency on Team Trump's connections to Russia and Russia's campaign to influence the election.

Though Nunes says the reports he viewed had nothing to do with Russia.

In addition, we know that details about communications between Russian ambassador Sergey Kislyak and Trump's first national security adviser, Michael Flynn, were leaked to news outlets by several current and former officials. That leak ended up forcing Flynn to resign last month.

Before getting too excited about oversharing intelligence, however, let's remember that Nunes is the only member of his committee to actually read these documents. It's possible that other people could have a different interpretation of what they mean or their pertinence to foreign intelligence collection, the legal standard that must be met to unmask the names of U.S. persons incidentally collected by the intelligence community.

The good news is that we will soon get a second and third opinion. Nunes told me that he expects that his committee's members, including Democrats, will be able to read these documents themselves at secure locations outside of Congress as soon as this week.

If it turns out that intelligence about the Trump transition was included in dozens of reports that were sent to the White House, then the House Intelligence Committee really has two investigations. The first is of course a probe into how the Russian state meddled in the election and whether it did so with the aid of Trump's associates or campaign. The second is about whether the Obama White House inappropriately spied on Trump and his advisers during the transition to power.