Jimmy Breslin knew how to play the game, very well 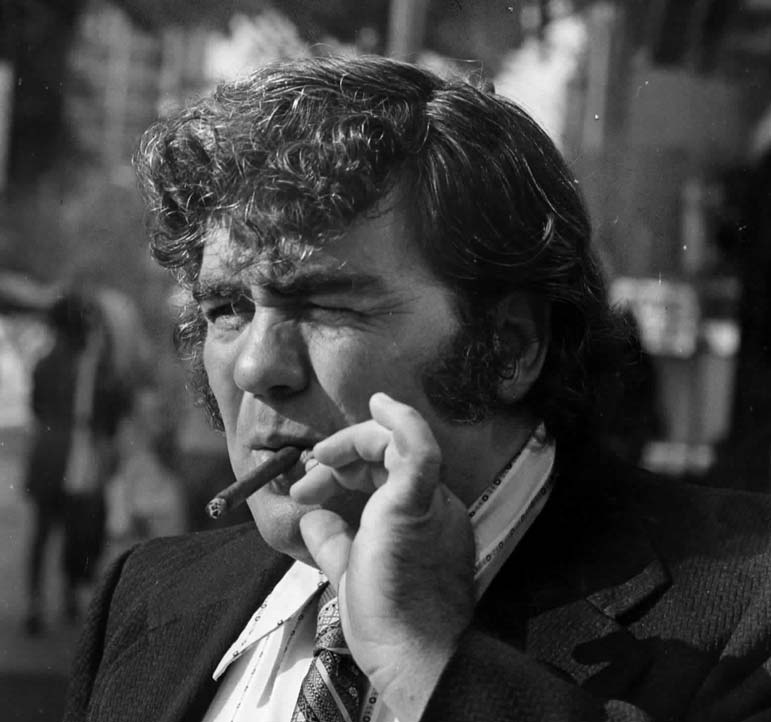 Jimmy Breslin smokes a cigar outside the Madison Hotel in Washington, D.C., in 1973. Washington Post photo by Ellsworth Davis

There's a wonderful story midway through "Can't Anybody Here Play This Game?", Jimmy Breslin's 1963 book about the delightfully awful first season of the New York Mets.

In the midst of a spectacular loss, with one pitcher after another being shellacked, manager Casey Stengel dismisses his hurler and signals to the bullpen for a replacement. Nobody emerges. Breslin quotes a wag he overheard: "They're afraid to come out." The line is so perfect that one cannot help wondering whether the wag was Breslin himself.

The writer and social critic, who died Sunday at 88, supplied journalism with one of its most distinctive voices. He grew up in a working-class family in the Queens borough of New York and became one of the most popular and most controversial columnists and essayists of his day. His thrice-weekly columns, first for the New York Daily News, then for Newsday, then for the News again, had a huge readership. His writing was edgy and acerbic, accusing and indignant, but never cynical. He cast himself as the defender of the little guy, and to a large extent he was exactly that.

Breslin found stories in strangers he encountered in diners and airports. He interviewed taxi drivers and doormen and laborers all over his beloved New York City. He was furious when they were mistreated, and always pointed the finger somewhere, but despite his often acid prose, he never forgot that he was a journalist. He was always telling stories, and he told them so well that the reader lived them.

Perhaps Breslin's most famous column is the one he wrote in the New York Herald Tribune about the burial of President John F. Kennedy, where he tracked down the man who dug the grave at $3.01 an hour. Classic Breslin: an interview with someone none of the big journalists would even think to look for. But more impressive was his moment-by-moment re-creation of Kennedy's death. He interviewed several of those present in the room, including the doctor who tried to restart the heart and the priest who delivered the last rites. He didn't follow other reporters in asking those who were there how they felt. He asked what they did, and recorded their answers in such detail that we feel as if we are present. The burial column is professional and nicely done. The emergency room column is a tour de force, one of the greatest pieces of journalism of the 20th century, worthy of study by anybody who is serious about the craft of writing.

Even in Breslin's earliest days as a sportswriter he was a storyteller at heart. His work swiftly acquired a distinctive panache, and he always tried to make the story about the little guy. Back in 1955, nobody else would have opened a piece on the financial woes of professional boxers with this nugget: "The best shoe shine going, they say, is produced by the quick moving hands of Sidney Walker, who works in the barber shop of a Miami Beach, Fla., hotel."

In his fiction, too, Breslin was fascinated by the everyman, the small-timer. In the climactic scene of his 1969 comic novel "The Gang That Couldn't Shoot Straight," a gangster named Sally Palumbo kills a top mob lieutenant. In a furious rainstorm, Palumbo and his top guy drive to the middle of the Verrazano Narrows Bridge and throw the body over the side. They rush off, unaware that the body never hit the water. It landed on a freighter instead, thus making emphatically public a gang war Sally had hoped to keep secret. Sally wants to run a crime family, but he's a bumbler. He's a killer, but we feel for him, even when he pleads guilty and is sent to prison for only a year. "A year does not sound like a lot in print," writes Breslin sympathetically, "but it is a very long time in jail."

Breslin was a relentless self-promoter back before self-promoting was a thing. "I invented the news column form," he once wrote, "and other papers immediately went out and hired imitators with Irish names." He was often involved in the news he reported. In 1965, he was present at the assassination of Malcolm X, a coincidence that to this day leads conspiracy theorists to mutter that he must have known about it in advance. But Breslin always insisted that he had paid his dues on the way up: "I did it all for the Press," he told an interviewer, "police, courts, fires, politics, sports, school boards, sewer hearings."

Breslin had his troubles, usually caused by his ego. There was the moment when the great crusader for minority rights viciously berated a Korean-American journalist in the newsroom for daring to call one of his columns sexist. There was the much-discussed incident involving the serial killer, Son of Sam, who while still on the loose sent Breslin a letter, which he promptly published in his column. (One is prompted to add that reporters who criticized him for milking tragedy for profit might perhaps have turned their eagle eyes on the profession as a whole.)

But with Jimmy Breslin, what you saw was what you got. Whether he was writing a sharply critical biography of Damon Runyon or an elegiac novel on Northern Ireland and the Troubles, you could be sure the writing would be witty, irritated and closely observed.

Indeed, the keen observer inside him never entirely turned off. In 1995, Breslin went to Arizona to have a brain aneurysm removed. The aneurysm turned out to be worse than thought, and the surgery was complicated and long. After the operation, he demanded to see the notes of the procedure, interviewed the surgeon in detail, and wrote a you-are-there sort of column of such engrossing detail that the reader may find it difficult to believe that Breslin was not awake throughout, sitting in the corner taking notes.

As an admirer once wrote, you couldn't imagine him being indifferent about anything. I opened with a snippet from "Can't Anybody Here Play This Game?," which I read back when I was a kid, and I can't close without mentioning another mot from the same volume.

Breslin was describing the philosophy of baseball and, by extension, the nation that lionizes it: "In this game when they're down you tromp 'em -- good -- lest they someday get up to annoy the winners."

He knew so well the country he loved.